been a Tomohiro Kaji fan since I saw him finish second to Tomoharu Saito last November at Grand Prix-Yokohama. At that time, he was a relatively unknown Japanese youngster who was respected in Japan, but who nobody knew elsewhere. 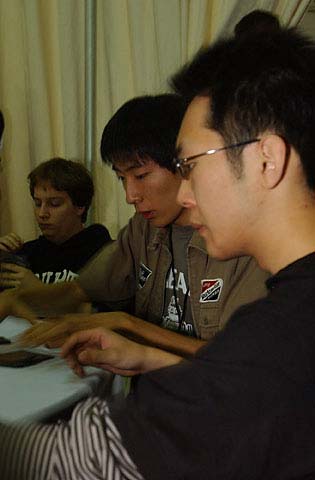 Kaji was in line with Geoffrey Siron and Masashi Oiso.

This year has changed that a great deal for Kaji, as a Top 4 at Pro Tour-Atlanta and a 10-2 record going into the final draft has secured his spot amongst Magic's rising stars. He needed a win, a loss, and a draw in his final table to make it to another Sunday. What follows are the relevant picks Kaji agonized over while sitting in Pod 1 with these gentlemen. We've also listed the color archetype of each player so you can better see how the draft sorted out, with Kaji's picks in bold.

At this point, Oiso was deep in blue-black with a first-pick Nezumi Shortfang, while David Larsson on Kaji's left was in the process of drafting a pootastic green-white deck.

Extras: That Which Was Taken

Kaji wound up with a solid deck, but not one that you'd want to have to play with Sunday on the line. He was the victim of somewhat unfortunate circumstances in how the colors at the table broke down. As you can see above, Tomohiro ended up in white courtesy of Kabuto Moth and Nagao, but then his second color was unclear.

I'm sure that if he had known red was going to open up in Pack 2, he might have taken the Torrent of Stone over the Miko in Pack 2, or maybe he would have taken the Throat Slitter in Pack 1 and jumped into black, but after passing two Devouring Greeds, Kaji figured that Larsson was in black right next to him, though he didn't necessarily know that Oiso was in black in front of him. 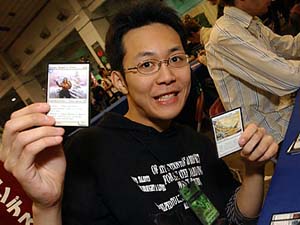 Kaji was pleased with his white cards.

However, once the Ishi-Ishis started arriving, Tomohiro jumped into Red -- though not necessarily with both feet. He kept passing black cards like Ogre Marauders, stocking Oiso's deck with gas while Kaji scrambled a bit for playables.

Saviors certainly helped the deck, at least partially because red is very strong there and white isn't bad either, but one has to wonder what kind of deck Kaji would have ended up with if he had made a couple of different decisions along the way. I'm sure he can get at least one win with this deck via some fattie samurai beats and Charge Across the Araba, but whether that comes early enough to vault him into the Top 8 remains to be seen. Knowing how good Kaji actually is, I'd say there's a better than good chance we'll see him playing Sunday.

Looking at the decks for the rest of the table, Arnost Zidek's may be the best deck I've seen all weekend. He clearly benefited from being one of two red drafters at the table, and his position was nothing less than perfect. It also doesn't hurt that he opened some bomb rares in Umezawa's Jitte and Jiwari, the Earth Aflame and then was passed Hidetsugu and a host of removal spells.

The only things that might keep Zidek out of the Top 8 are some extreme bad luck or a choke, as his nerves light up from the increasing proximity to his first Sunday. Oiso's deck is also quite saucy, but he called it a complete waste, because all he was going to do was draw with Siron in round 13, thus making him a lock for the final draft. Larsson looks to have the weakest deck at the table, and then everyone else will have to claw and scrape for one of the final spots at the table. It should be a very interesting final three rounds.