Draft Recap: The Flow of Color at Table 1

By Ted Knutson and Tim Willoughby

Table 1, source of mystery, intrigue, and more than a few good cries at great hopes gone awry. Six of the players seated here have posted undefeated records, and all are safe for Day 2, so all that's really riding on this are three matches and a very good chance at a spot in the Top 8, should you manage to 3-0 this table.

In order to bring you something new and different, dashingly handsome Englishman Tim Willoughby and I decided to break the draft table in half and try to show you how the colors played out in the third full block draft of the day. Since I am older and wiser, I get to kick off this party with my analysis of the action from my vantage point while standing behind Frank Karsten (who, for the record, had not lost a game in the tournament yet). Once I've told my side of the story, Timmy will fill you in on what he saw behind Justin Gary.

Frank's first pick was Vedalken Dismisser over Trophy Hunter, Veteran Armorer, and Bottled Cloister, while Doise went for Civic Wayfinder directly in front of him. Doise picked up a Siege Wurm in pack 2, while Karsten grabbed Drooling Groodion. Karsten then picked a pair of Greater Mossdogs from Doise's next two passes, while Jan grabbed Viashino Fangtail and Brainspoil from the next two packs, giving him three picks in completely different colors that all have double-mana costs. This is exactly what so many pros in the know have been swearing off this weekend because it leads to drafts of death, but Jan plowed forward, while Frank picked up his green scraps. 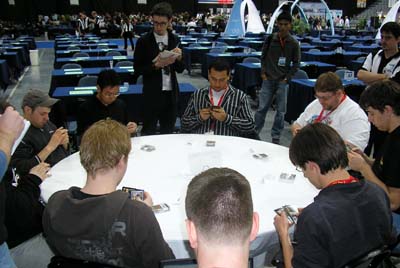 Many eyes were on Table 1 of the third draft.

At the end of pack 1 Doise had a pile of green, red, and black fatties, Karsten was mostly just green and black, Sibast was happily drafting Boros cards that came through to him, and Oberek was busy drafting blue control cards with dips into black and green.

Pack 2 saw Sibast completely clean up on Orzhov cards, opening a Debtors' Knell and then adding solid black, white, and black/white cards to his pile for the entirety of the pack, including an Orzhov Guildmage. This left Karsten in good position to clean up every Gruul card that came his way, while Doise was left Frank's scraps. My notes for Oberek's pack 2 say "scruffy" which I think means that he had no real guild to draft in this pack, leaving him to piece together playables from whatever Terry and Justin were passing him. Apparently it wasn't much.

Pack 3 was where being flexible in your strategy really appeared to pay off for certain players. Since Sibast had cleaned up all the Boros cards in pack 1, he was expecting to get Rakdos cards back in Dissension, but that's not how it worked out. Rasmus grabbed a first-pick Seal of Doom from that pack, a second-pick Seal of Fire from the next and then was given an utter gift of Azorius Guildmage for pick 3, should he be interested. He was, switching completely into Azorius from there out. This was rather easy to justify since Karsten and Doise were passing him the stone cold nuts. By the end of pack 3, Sibast had added Court Hussar, Azorius Herald, an Azorius First-Wing and various other blue-white cards to his pile, completely throwing out his Boros cards in favor of a superior guild.

While Sibast was gobbling up Azorius, Karsten was busy showing how highly he values mana fixing. Frank picked Wrecking Ball first, a Rakdos karoo, and then multiple Utopia Sprawls plus a Simic karoo as well. While gobbling these cards up, Frank passed many Coiling Oracles (he said they are overrated), and sundry other Simic cards that would have seen a great deal of play in almost everyone else's deck. Afterwards, I thought Frank's draft went pretty poorly, but he was a bit more upbeat about it, saying that he didn't really thing he made many mistakes, he just didn't end up with a great deck. Asked for his predicted record, he did have to hedge a bit and say "I think it's probably a 1-2."

And now we turn to the other side of the table and Tim Willoughby.
Around on the Justin Gary/Terry Soh half of the table, there was plenty in the way of tricky decisions. For Invitational winner Terry Soh, the choice was a Vedalken Dismisser over Plague Boiler. The Boiler, which was previously perfectly respectable, has taken something of a dive along with much of the green in Ravnica that is allied with another colour. Meanwhile quality cards that don't commit one to a particular colour heavily have taken a veritable leap. Civic Wayfinder might not look it from a casual glance, but it in spite of appearing green, it is actually solid gold. 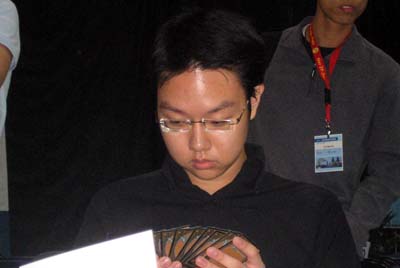 Soh tried to push Gary into white to preserve his own blue-green hopes.

For Gary, to Soh's immediate left, the decision was again all about mono-coloured cards. In Gary's instance, it was the very mono-coloured Halcyon Glaze that caught the eye. It is a little greedy to jump into a colour that early in RGD draft, but Gary had such good experiences with the enchantment in the rest of the block that he couldn't not go for it. Whether the Glaze is quite what it used to be now that Dissension has brought a slew of flyers (including one that has protection from enchantments, and can block it all day long) is uncertain. Given that his next best pick was a Brainspoil, just as heavily committed to a less powerful colour, it seemed reasonable.

From the second pick onwards, it seemed that Soh was pushing Gary towards particular colours, with back-to-back Skyknight Legionnaire, Faith's Fetters and Oathsworn Giant heading to the YMGer, as Terry aggressively pursued a blue-green build. It would seem that the signals in the full block draft need to be pretty clear, or it is not reasonable to expect them to stop dips into other colours as necessary in later packs. This has been a little tough for many of the pros to get the hang of, and is just one of the reasons why the format might be one of the best draft formats in recent memory. Past Gary, there was Michael Donovan, another Simic drafter, also running white, which appeared to be working just fine for Justin, who could allow himself to be pushed by the currents of other player's picks without being disrupted in the slightest. The underdrafted colour? Black. Chris Huttenberger was getting pretty well hooked up from his right with black cards, for which there didn't appear to be much competition. Starting out with black-white-red, the German appeared to be doing similarly to Gary, getting in a neat tripod and steering clear of too many fights.

This paid off big time for him in pack two, where he could happily scoop up Orzhov cards with little contest. Meanwhile, there were a few forced switches elsewhere on this half of the table. Michael had to move into red, and Terry's draft, which was primarily blue-green with a little black, had to move closer to blue-green-red. This is a fine archetype, but for the fact that many of the Izzet cards were being contested by the players upstream of him. Justin only had one guild to worry about, and his picks of Gelectrode, Steamcore Weird, Ogre Savant and Izzet Signet for the first four were all pretty straightforward. On either side of him, there were complicated issues between multiple guilds going on. Terry had to take a Leap of Flame over Skarrgan Skybreaker as he really needed tricks, while Donovan, who was guildless for the pack was taking white cards over powerful gold spells, simply for mana stability. He showed some interest in red during the pack, though more in a Gruul style (starting with a Gruul Guildmage) than with Izzet.

For the final pack, Gary got the full on hookup. His first eight picks were as follows:

The ministers that got past Terry were passed in favour of Simic Guildmage and Seal of Fire. In general, the packs seemed skewed towards Azorius on this side of the table, which worked to the detriment of most, but kept Justin happy. Soh got his Simic hookup to a limited extent, without as many big flyers as he might have liked, but with Ocular Halo, Vigean Hydropon, Coiling Oracle and good utility, backed up by some red removal.

It's unclear how early it's appropriate to jump into archetypes in RGD draft, and how firmly to stick to them when there are signals that it might be worth shifting around. Obviously, if you are lucky enough to jump into a triad with a little breathing room on either side, then it is possible to clean up, but it seems likely judging by the way that the packs got passed around that there was some switching going on, which hurt various players in the draft, and gave others decks that will be very dangerous in the third pod.