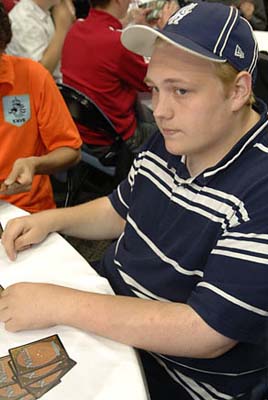 Hoaen entered Prague with a draft reputation matched by few other competitors.

Ho is a pimp when it comes to Limited formats. Underrated for his Constructed skills, Rich Hoaen is widely regarded as one of the very best Limited players in the game by virtually every Magician on the planet. The Japanese speak of him in hushed, reverent tones, and people up and leave Magic Online draft queues in droves when rhoaen deigns to speak in one. Therefore the choice to follow his first draft in this unique and fascinating full block was an obvious one.

Talking to Richie before the draft, he said he'd been going four colors in a lot of the practice drafts he had done, whether he was drafting green or not. Here in this draft, he opened a relatively weak Ravnica pack with Brainspoil, Thundersong Trumpeter, Bramble Elemental, and Veteran Armorer as the only notable picks, and immediately went green, picking the Bramble. Former World Champion Julien Nuijten was seated to Rich's right, and immediately cooperated by shipping the big man a Siege Wurm to go along with Oathsworn Giant, Skyknight Legionnaire, and Golgari Rot Farm. High quality cards quickly petered out, however, as Rich had to take a Flight of Fancy in pack 4, Spectral Searchlight in pack 5, and Elves of Deep Shadow in pack 6 for his playable cards, before he wheeled the Rot Farm tenth, shooting a pair of raised eyebrows at the table in the process.

At the end of pack 1, Hoaen had drafted exclusively green and blue cards along with some decent artifact mana fixing, but some thin packs in the middle left him with fewer quality Ravnica cards than he probably would have liked.

Stratozeppelid flashed Rich a wink as he opened his Guildpact booster, going immediately into his pile with only cursory glances at the Pillory of the Sleepless and Douse in Gloom also present. Izzet Chronarch, Dryad Sophisticate, and Orzhov Basilica surrounded Burning-Tree Shaman in pack 2, strongly suggesting that Gruul cards were available for the taking. That's exactly what Hoaen did for the rest of the pack, adding a Stomping Ground, Gruul Turf, Gruul Signet, Burning-Tree Bloodscale, and Ghor-Clan Savage to his growing pile, as well as a single Repeal that came to him around pick 6.

After two packs, Rich was now clearly entrenched in Simic/Gruul colors and would be looking to clean up blue-green cards in Dissension. That's exactly what happened, as it appeared the entire table was now more than willing to pass him what many feel are the strongest cards in Dissension. Hoaen didn't end up with any Assault Zeppelids, but he seemed to get almost every other solid playable in the guild including two very late Coiling Oracles, two even later Vigean Hydropons (or what Mike Turian calls the Wall of Hats), Helium Squirter, Trygon Predator, Silkwing Scout, Cytospawn Shambler, and the extremely effective Plaxcaster Frogling.

When building his deck, Hoaen wasn't sure he liked it that much because it had very few spells (he added a Leap of Flame late in construction to give himself more tricks), but his mana was rock solid, and all of his creatures were solid or better. Having done quite a few drafts in this format myself, it wasn't the strongest blue-green-red deck I've seen, but it looked pretty good, and in Hoaen's hands would probably lead to a 2-1 record or better.