I tried to qualify for the main event by playing the Last Chance Qualifier with 411 other anxious players for four scarce places and failed, I had to consider what I wanted to do for the rest of the weekend. Of course I could see the beautiful city of Prague or play a few side events, but I opted to do some coverage. Although having Eelco van Ruth in your car and hotel room can be hard, it has one big plus: he knows everyone. So, when we arrived at the playing area he walked into some officials, shook some hands and asked around and after an hour I was becoming a journalist.

In my younger years I wrote some chess and bridge reports for the local papers, but I never did any Magic coverage before. Just when everybody was seated for the first draft, I finally got my press card and ran to the table where I could cover Julien Nuijten. I found him pretty easily because he we was wearing an orange Dutch soccer shirt. I sat down behind him and started up the laptop I borrowed from Van Ruth, which made some happy Windows-noises. Van Ruth used his computer the last few days to wake me with loud music, so I knew I introduced myself to the tables around me very well. Sitting left to Nuijten was the well-known North American pro Richard Hoaen. I didn't see another famous player at the table. 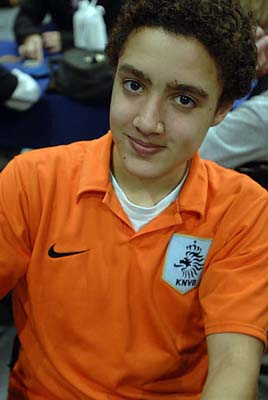 The former World Champ was easy to spot in the event hall.

For the last few years I have played Magic with Nuijten in the famous 2 Klaveren in Amsterdam on Mondays, so I know him very well. Everybody knows this young former World Champion is a very good player, but I especially honor his fresh ideas in draft. And now when Dissension just came out and this is the first big event with the new set legal and everybody is still looking for ideas for this extremely difficult set, I was interested in how he would walk through the first draft of this day.

He prepared himself with nonstop drafting with some French, Belgian and Dutch pros (although his exams start in two weeks), so he should have a pretty good idea about the set right now. The first booster was opened and for the well-prepared journalist that I am, I only had to find Word on the computer … which I failed. Of course I left my pencil and paper in the car, because I already had a computer. I just had to sit down and would have to memorize what would happen.

Nuijten started with an unexciting booster with Peel from Reality leading the way. I know he likes black-blue like every pro does, so he took it happily. In the second booster the young pro took a Farseek to go blue-green-red. Third he took the Drift of Phantasms followed by a Stinkweed Imp and a fifth-pick Helldozer! Now he was finally in his favorite B/U and could leave Farseek in his sideboard because green-black-blue is pretty unplayable. He picked a Tattered Drake and a Clinging Darkness in the rest of the pack. I had some mixed feelings about how the draft was going, although I didn't see any great cards in the other colors either.

On to Guildpact where we would see if Nuijten would go the black-blue-white or black-blue-red way. He opened another unexciting booster where he took Izzet Chronarch first. Second pick he had to choose between Douse in Gloom and Pillory of the Sleepless. Of course he took the Douse, keeping his options open. Third pick he took a second Chronarch and after that two Torch Drakes and a Shrieking Grotesque above a Vertigo Spawn. He still wanted to keep his options open, but he was sorry about that after the draft. I saw him taking two Castigates and an Orzhov Signet too, so I wondered if he would maybe go for four colors. He was happy with the two Chronarchs, although he missed the Ogre Savants or Steamcore Weirds which make this archetype so popular.

In Dissension he started with a Wrecking Ball, followed by a Cackling Flames and a Helium Squirter. He then took an Imp, two Ocular Halos in a row and a 2/2 Rat which finally gave him a two-drop. The third booster was pretty okay, but overall I think his deck is below average. Nuijten thinks drafting with a curve is less important and that card quality is far more important right now. He was happy with the two Chronarchs together with the removal and thinks he might go 2-1 with this deck. I think he will need to work hard for that, but we'll see soon.