secret is well and truly out. Neil Reeves turns into some kind of legend when he has cards in his hands. If you summon a second Neil Reeves, they both die. Luckily for everyone else at this Pro Tour, there can be only one. A few years back, Neil's laid-back style and southern drawl caused a few opponents to underestimate him, walking into a deadly trap. Today though, having represented the American national team at Worlds, Neil is as much of a threat as ever, but one unlikely to slip under the radar. 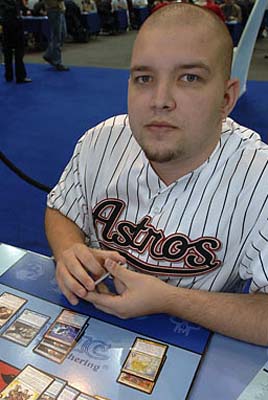 Neil's controllish nature came through in the first draft.

A control player at heart, when Neil sat down to draft he knew that he wanted to be going blue in some way shape or form. He finished second at U.S. Nationals with a monoblue control deck, he while he clearly wouldn't be looking to limit himself too much on colours in Prague, the combination of flyers, card drawing and counterspells was still one that the Arkansas native wanted to be in on.

His very first pack featured a Vedalken Dismisser, without any real competition for first pick status. The same could not be said of the second, shipped by Pro Tour-Kobe winner Masashiro Kuroda, which sported Last Gasp, Compulsive Research, Viashino Fangtail, Farseek and a Boros Guildmage. In the opinion of Reeves, Last Gasp (and black in general) has dropped significantly in value in the full block draft, and he was pretty happy to pick up the Research, and keep his options well and truly open. When he received a Devouring Light third pick, it seemed a clear signal that white could be dropped into. Meanwhile, the previously powerful Selesnya Evangel got passed on with barely a look. As Selesnya doesn't hook up neatly with guilds the whole way through a draft, it has rather been left by the wayside by many pros this weekend - a big swing from the start of the block where it was almost mandatory in most sealed decks at limited GPs.

The next pack faced a tricky decision. There was a Siege Wurm alongside a Screeching Griffin. The Wurm was clearly the more powerful card, and works very well in Simic as a top end beater, but it seems that Simic is one of the most popular guilds this weekend, so Reeves was torn as to which to pick. Blue-green is his favourite archetype (splashing a third colour typically), but he is also happy with blue-white, splashing black and/or red as necessary. At this early stage, he was happy to chance his arm with the Wurm. It would be virtually the last green card he would get.

Neil followed up with Belltower Sphinx, Thundersong Trumpeter, Remand and an eighth-pick Ghosts of the Innocent that he happily put into his draft pile before moving on to the next pack. From there, the quality went downhill rapidly, with only a Boros karoo and a Convolute lapping for the big man.

Going into pack two, Neil was effectively blue-white splashing red. When he opened his Guildpact booster to find Steamcore Weird, Izzet Chronarch, Pillory of the Sleepless and Mortify staring back at him, he was suddenly torn. Could he support a second splash? The verdict at this time it seemed was no, as he went with Steamcore Weird. A small sigh came when the next pack also sported a Mortify. Luckily for Neil, it also had another Steamcore Weird. Given that Neil had passed a Last Gasp early in pack one, it was interesting that the player to his direct left was passing a Mortify back. Perhaps the Last Gasp had gotten as far as Craig Jones, two seats over?

Given the two previous picks, Neil then went with an interesting choice, taking Pillory of the Sleepless over a Repeal. In the blue-white archetype it is pretty easy to make splashes here and there, and clearly Neil felt the extra power was worth it. He did get a Repeal in the next pack, so he was pretty happy.

A Harrier Griffin joined the team, then Neil built on his black splash with a Blind Hunter. From there Guildpact was a little thin, with just a Train of Thought coming that seemed good enough to play main.

Going into Dissension, Neil's deck was beginning to take shape, a four-colour blue deck that was a little short on mana fixing, but had good tricks and reasonable guys (though not as many of them as might be ideal).

Neil officially gave up on his green splash at the start of pack three, where an Assault Zeppelid was deemed not good enough. The big decision for Neil was between an Azorius First-Wing and Pride of the Clouds. Ultimately it wasn't too tough a call, with the rare making the cut. With plenty of fliers, it seemed likely that a fair amount of the time the lions would be larger, and their forecast ability could well be relevant. The second pick was a slow-roll windmill slam for Reeves. Kuroda passed him a Demonfire out of nowhere. One would have thought that it is always a first pick, given the ease of running splashes in this format, but apparently Kuroda felt differently. Given that Neil was already in red, it was a no-brainer.

What Neil was really looking for in Dissension was Soulsworn Jury, the little defender that does everything, blocking most ground pounders and at some point playing as an on-the-table Remove Soul. He didn't see one in pack three, taking an Azorius First-Wing and letting some lucky Simic player have another Zeppelid. Pack four did have one, but it also had an Azorius Herald, who is simply too powerful not to take if you are in Azorius.

Things were shaping up nicely for Neil now, though it was looking increasingly doubtful that the black cards would be making the cut. Another First-Wing, and a Court Hussar smoothed out some of the creature curve issues, and Carom and Overrule neatly went into the pile of playable tricks.

When it came to building, Neil was fairly happy with his draft, though ultimately he wasn't able to play the Hunter or Pillory, as he simply had no black mana fixing. Without any Soulsworn Jury's Reeves predicted himself a 2-1 finish. With them, he felt he'd be a straight up 3-0.

One way or another, for three rounds, players would be facing off against a Neil Reeves playing a control deck that can randomly go to the dome. Best of luck to them, they'll surely need it.