Terry Soh is best known for dominating last year's Magic Invitational, where he earned the right to appear in the art of the Invitational card he designed: the gruesome Rakdos Augermage. Terry has proved equally adept at RAV-GPT-DIS draft, posting ten wins out of 12 rounds. Needing only a 1-1-1 record to make Top 8, Terry planned to stick to the same combination he'd taken in all four previous drafts: the popular Blue-Green-Red. For this draft we recorded all of the picks by each player, so once we've got it online you'll be able to use the Draft Viewer to follow the draft yourself!

Many players are drawn to UGR largely for the synergistic combination of UG's Graft and RG's Bloodthirst, aka "Bloodgraft," but not Soh. He analyzed the format by identifying Izzet and Simic as the strongest guilds, then deciding that to get them every single time, he was willing to give up on having any Ravnica guild to draft at all. Gruul ends up being the natural third guild in the trio. As a large set, Ravnica has enough monocolored cards and hybrid cards to fill out a third of his picks even without any guilds in his colors. While he'll use the Graft/Bloodthirst combo if it comes up, Soh prefers to use graft to increase the size of his blue fliers - especially the aggressive three common Simic fliers in Dissension: Assault Zeppelid, Helium Squirter, and Silkwing Scout. Guildpact's burn and Ravnica/Guildpact's numerous blue card advantage tools round out the archetype.

Terry started Draft No. 5 without knowing the styles of the player on either side. Cleansing Beam was an easy first pick, followed by Snapping Drake over Moroii. While many players prefer Moroii's higher power, and more importantly higher toughness, Soh was committed to his URG archetype from the beginning, and refused to put black mana into his base when there was a powerful card available in straight blue. The third pick was disappointing, offering only Dimir Aqueduct and Veteran Armorer. Worried that the player on his right might be too close to his colors, Soh took Armorer, putting his draft in danger of going off-course.

The fourth pick reaffirmed Soh's value on archetype over single-card quality when he took mediocre but in-the-plan Sell-Sword Brute over the far more powerful Brainspoil. Nullmage Shepherd was followed by a bizarrely remaining sixth-pick-overall Dimir Guildmage. To an uninformed eye, Soh looked like he was going all over the place, with 4 different colors in his first 5 picks, and 5 different colors in his first 6 picks! But in reality, Soh never really planned to activate the black half of the guildmage, and Veteran Armorer was the only card he'd snagged outside of his URG plan. The rest of the pack was worse than normal, offering only WG Signet, Terry-former and Skysweeeper. 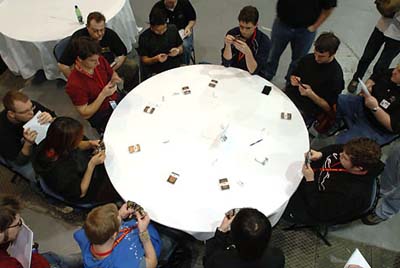 Soh was surrounded by quality drafters.

At the start of the second pack, I glanced around and noted that Terry's lefthand neighbor had BRg, with RWb on Terry's right, indicating pretty clear sailing guildwise, with only a minor Gruul overlap. Soh started large with Streetbreaker Wurm, Electrolyze, and Ghor-Clan Savage, then quickly tucked a fourth-pick Invoke the Firemind into his pile. Soh desperately needed both elf/signet acceleration and raw mana production for his copious 5-drops, and probably have regretted passing up a valuable UB Karoo in favor of the clearly unplayed Veteran Armorer. Fortunately, an Izzet Signet followd up a Torch Drake, but mana production and acceleration were still clearly a big gap. Again, this pack dried up fairly quickly, leaving Soh light on playables. At the close of the second pack, he was securely URG as planned, and hoping to reap the Simic rewards of the third pack.

The first Dissension booster offered no rares, but paid off his plan with awesome UG common air cavalry: Assault Zeppelid, Helium Squirter, Assault Zeppelid. Sporeback Troll joined the team over WU Karoo, leaving Soh still very dangerously low on mana generation and acceleration for his many many 4 and 5 drops, with signets and karoos increasingly unlikely as the packs got smaller. If nothing showed up, Terry risked locking his hand full of powerful 4-5 mana creatures and no way to cast them. Terry is a big fan of the troll for making a flier bigger, then gumming up the ground with regeneration, so he was still happy to make the pick. Soh must have had a four-leaf clover, because in picks 5-7 he finally found the missing link: UG Karoo pick 5, RB Karoo pick 7. Pick 8 Vigean Hydropon curved perfectly under his 4 and 5 mana fliers.

At the end of the draft, Soh's deck boasts many powerful 4-5 mana monsters, plus Cleansing Beam and Invoke the Firemind, but little to cast under the 4 mana mark and only a couple of signets to get there. He's very happy to have the common picks he needs to fulfill his favored archetype. His draft's weaknesses include having only 1 rare, a high curve without much acceleration, and a slight lack of "always playables" due to the first two packs being a little thin. In retrospect, it would have been better to have Dimir Aqueduct over Veteran Armorer - he has seen White underdrafted at the top tables and wanted to have a flexible option if the player on his right also drafted URG.

He agreed he needed one more signet, and he quickly identified his 20 "always playable" cards, then filled in the ranks with reasonable also-rans Muddle the Mixture, Leap of Flame, and Shielding Plax. To compensate for his high curve, he's playing 19 mana sources, including both karoos and both signets. Soh called his deck very similar to the ones he'd drafted all weekend, and felt confident he could get the one more win he needed to be able to draw smoothly into the Top 8.