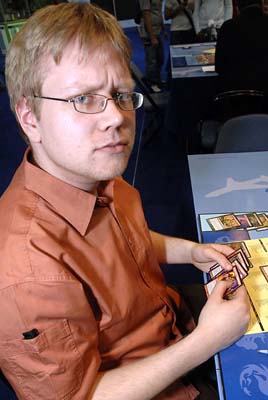 Tomi, showing his sullen side. This cracks them up at the comedy clubs.

all the people that I have watched draft, I think that I like watching Tomi the most. Articulate and thoughtful, he is more likely than most to think outside the box and find the best option in any situation. If there is ever a good person to learn the potential of cards from in draft, Tomi is your man.

One of the pros in the current Magic renaissance brought on by the introduction of the Hall of Fame, Tomi is eligible this year to get in, and looking to put up some extra top-level performances to show that he is still the man. Having made Top 8 in the last Limited Pro Tour, and currently being 3-0, he is definitely in with a good shot of proving himself worthy of membership to Magic's most exclusive club.

In the meantime, he is also a full time stand-up comedian in London. This gives him honorary English status, and he has declared that it is time for England to win a Pro Tour. That's what the Queen would want.

Having come to Prague early and spent most of the week drafting with various Scandinavians and Americans, Tomi went into the second draft without any plan set in stone. He wanted to be either green or white, but beyond that was looking to be flexible.

The decision in the first pack was between Disembowel and Moroii. Given that Tomi likes to remain pretty flexible in his drafting, the Disembowel was the logical choice. One way or another, it would definitely get played, and as such, made it into the pile. If anything, pack two was tougher, with Vedalken Dismisser, Golgari Guildmage, Char and Overwhelm. For Tomi, the Char was the safe card to take, though he was definitely tempted by the Dismisser. Passing along on Moroii and Dismisser seemed like a pretty good signal to the player to his left to go into blue, and it looked that Tomi was going to eschew the straightforward route to card advantage offered by blue.

He took a third pick Argus Kos, Wojek Veteran, and suddenly had a nice little three-colour tripod together: Boros for pack one, Orzhov for pack two and Rakdos for the final pack. An aggressive build on this trinity worked very well for Masashi Oiso in pod one, and indeed Tomi went 3-0 with a more controlling style. Given the fights going on for blue and green, it looked like a nice metagame call.

There is the danger with this archetype that in the final pack you can randomly get cards taken away from you by players all around the table regardless of their guild affiliation, as Rakdos is where a lot of the removal tends to live. Given the way that many of the other pros have been going about things, it might not be as big a fight as for many of the premium blue cards.

The rest of the pack Tomi worked on this theme, picking up a Centaur Safeguard, War-Torch Goblin, Sabretooth Alley Cat and Clinging Darkness. It wasn't really clear where he was drawing the line between control and aggression, but given Tomi's fairly fluid style of playing and drafting, this was hardly surprising.

Guildpact started out pretty well for Tomi, with a Blind Hunter in a pack where the only real competition for his attention was Gelectrode. Unfortunately, this trend did not continue. Whether this was due to sparse packs or being cut by the player on Tomi's left was unclear. Pack two had no Orzhov cards of note, but did have a Streetbreaker Wurm. This big beater has a nasty habit of just ending games due to being very large. While Tomi is typically more of a control player, he was not going to take a significantly weaker card at the expense of winning games.

In the next pack, it was a similar story. No Orzhov, ergo Ghor-Clan Savage. The big beatdown strategy with a double splash was coming alive. Tomi did get a fourth-pick Pillory of the Sleepless, which seemed to suggest that it was more likely that there was an unusual distribution in the packs than that the player on his left was in Orzhov, but after that it was back to The Man Plan. Streetbreaker Wurm number two was followed up by Silhana Starfletcher, a card that Tomi feels isn't significantly far behind Civic Wayfinder in terms of power now that mana bases are wackier and flyers are everywhere. A Gruul Signet, Scab Clan Mauler and Gruul Nodorog meant that Walamies deck could serve up plenty of beef, while the control cards simply did not seem to be there.

For pack Dissension, there was a decision to be made. Azorius Guildmage is a very powerful guildmage, and even with just one of the colours represented in his deck, Tomi was pretty happy to take it over a Seal of Fire. It would mean that he would have to play a fair bit of white to be able to get him down, but did give his deck some late game controlled aggression options. Seal of Doom in the next pack was just removal. Mistral Charger over Seal of Fire was a choice that surprised me, but given that Tomi had elected to go heavier white, and needed guys, he felt it was the right one, commenting that in his experience Seals of Fire didn't really do enough in the late game for his liking.

Supply/Demand was a great addition to Walamies's deck for the late game, and Guardian of the Guildpact, who seems a little underrated today, came to him seventh. From there, Tomi just needed to wrap things up a little. Double Verdant Eidolon would definitely help out his rather complicated mana base, and a late Riot Spikes could help with control or beating down, while bringing the Eidolon back.

In construction, Tomi mentioned that of all the drafts he had done in the past week, he had found that it was this mixed-bag style deck featuring lots of powerful cards that was his only winner. The power level of his deck was fine, but he was concerned that a blue deck could win a battle of card advantage against him, forcing a more aggressive style depending on the matchups. With plenty of removal, and dangerous creatures, Tomi predicted himself a 2-1 in the draft, which would put him at 5-1, in great position for the final draft of Day One.