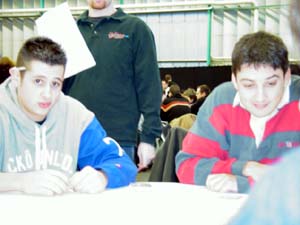 I shuffled into the event site yesterday with the rest of the Sideboard staff, we mingled a bit with the players and tried to get a feel for their perceptions on the Mirrodin draft format, and their strategies for the tournament. In short order, Jordan Berkowitz dominated the discussion. Not that we minded, since Jordan was more than happy to share some very interesting ideas about the format. He advocated playing as little land as possible, taking Myrs as early as possible so that you can pick up the power cards later (as opposed to the other way around), and promoted the merits of the Towers, and of all things, Fractured Loyalty. As the pods were announced this morning, Jordan was placed at a table with no other players I recognized. Certainly, the potential was there for Jordan to control the table and put together an optimal deck.

Berkowitz was placed in the eighth seat, and complained a bit about it, but pointed out that he was often in the first or eighth seat during practice drafts. The first pack was opened by Berna Da Costa Cabral to his right, and provided an easy decision thanks to Glissa Sunseeker. By the time the pack wheeled to Berkowitz, he took both a Scale and Tooth of Chiss-Goria. In the second pack, Olivier Monbailly in the second seat opened yet another bomb rare, taking Solar Tide. Berkowitz was still hesitant to commit to a color, taking Myr Retriever and a late Vault of Shadows. In the next pack he gladly took Fractured Loyalty, and picked up Gilded Lotus when the pack bounced back the other way. At the moment, he had green drafters on both sides. He continued to pick up red cards, getting Vulshok Berzerker and took another Fractured Loyalty. This time it was early, and it got a few confused stares from the rest of the table. An opportunity presented itself soon after, as Fangren Hunter fell into Berkowitz's lap. Not the best position to be in since he had green drafters on both sides, but he took it, and a Predator's Strike in the next pack. Things kept improving, as he opened and took a Spikeshot Goblin.

Berkowitz opened the next pack as well since he was in eighth position, and took Icy Manipulator over Deconstruct and Detonate, flashing the Loyalties to me to emphasize the synergy. A pack later he wheeled Wizard Replica and Alpha Myr. The second Loxodon Warhammer of the draft was opened on the other side of the table by Takashi Ayama in seat five (Stefano Fiore already opened one of his own in seat four), getting some groans out of the table since the power level of the decks was growing considerably. Berna on Berkowitz's right wasn't about to switch out of green even if he felt threatened by his neighbor, and took Predator's Strike. This left Aether Spellbomb for Berkowitz, which seemed like nothing more than a cycling card. That is, until the Domineer in the very same pack actually came back around, and got to him tenth pick. Suddenly, just as the switch into green had not paid off, blue had become a very viable option.

Serum Tank and a Thoughtcast put Berkowitz back on track, and he took a Goblin Replica in another pack over Clockwork Vorrac. Detonate provided yet another artifact removal spell, as the packs went back to seat one to change direction again. Berna opened his pack and got yet another Glissa, which got a very negative reaction from the table. Berkowitz was still fairly happy, as he was able to wheel his third Fractured Loyalty, and a Talisman of Impulse. In the following pack he got another Tooth to help out his Loyalty strategy, and he got another Wizard Replica. The last few packs were very unkind to Berkowitz in terms of power level, as they contained Crystal Shard, Betrayal of Flesh, Grab the Reigns, Duplicant and Lightning Greaves among others, none of which got to him. As the packs wound down, Berkowitz looked at Greg Prevost to his right, practically begging him to open a powerful card that could go into his deck. He had to settle for Slith Firewalker, surprisingly passing Somber Hoverguard and Pyrite Spellbomb. Berkowitz opened the last pack of the draft and rubbed his hands together in anticipation, which turned to utter frustration as he looked at the pack- it was terribly mediocre, and he had to settle for Wizard Replica as his first pick. He took it and elevated it above his deck, and then let it go as it floated down with some fairly sarcastic body language.

Sideboard: So how do you think it went?

Berkowitz: My deck is pretty good, but everyone's deck is insane. The guy to my left has two Glissas, the guy to his left has Solar Tide and Luminous Angel, the other guy has a solid red/blue deck. There are two Warhammers at the table, Grab the Reins, and the guy to my right has a solid deck that's almost mono-black. I think the three Fractured Loyalties will win me games though. They're so good.

Sideboard: You seemed pretty frustrated by the fact that everyone at the table was opening up great stuff and you couldn't catch a break.

Berkowitz: I needed that Grab the Reins to be opened one seat over. I couldn't get into colors early in the draft, because on both my sides, everyone was in every color. Since I was on the eighth seat I had the tail end of it, and I was just getting screwed on every single pick. I was going into green at first, and the guy to my right started dipping into green, so I had green on my right and left. I knew I was going to be red because I had a good space for it right there, and then I ended up going blue because I knew on my right there weren't two blue drafters. In pack two I was trying to set myself up to get red, because there were no red drafters on that side, but it happened that there were no Shatters or Bolts from that direction. None of the blue came, if two blue cards or red cards were opened I would get one of them, but there would always be just one red card or one blue card, and I would never get anything.

Sideboard: I found it weird that you went into green when the guys next to you were both in that color.

Berkowitz: At that point, the guy on my right wasn't solid into green except for Wurmskin Forger. I was going to take it early, but the pack (the first one) already set up three green drafters. I wanted to go green, but there was nothing I could do.

Sideboard: I'm guessing you decided to go blue after getting that tenth pick Domineer.

Berkowitz: I saw that pack, and I already had a Wizard Replica from before. In my head I knew I had an opening for blue, and I saw the Spellbomb and the Domineer, so I figured this was the perfect opportunity. I took the Spellbomb, and Domineer is double blue so no one is going to touch it. One guy opened Crystal Shard at the table and he's going to splash for it, but he could have easily dipped into blue and could have taken the Spellbomb and played it. But, if I pass him the Domineer he's not going to even think about it. Plus I'm fairly well known and the rest of the table was seven guys I've never heard of, so I was hoping they would know who I was and be nice. But, the guy on my left screwed me a few times and I wasn't doing anything except giving him what I wanted. There were a few times where I took green cards…I think he looked at that like I was trying to screw him, but I don't think he realized I had nowhere to go. If I got that gain ten life Tower (of Awe), that would have been great, but now this (Gilded Lotus) isn't even playable in my deck.

Sideboard: So tell me about Fractured Loyalty.

Berkowitz: It's insane, especially if you have three of them. I would have first picked a Tooth over Wizard Replica in the last pack. In a Rochester we did, I had two of them and I was mono-red, and we all think it's really good. I took a weird pick at the end with Slith Firewalker. There was Somber Hoverguard and a Pyrite Spellbomb. But, I didn't need more spells. I need to go fast, because all their decks are too good. I'm actually pretty happy with a lot of the cards they opened like Glissa and Luminous Angel, because I've got four Control Magics. I'm probably going to win most of my games with their cards.

Sideboard: The funny thing is, when you took the second Loyalty pretty early, everyone at the table was looking at you like "What is wrong with this guy?"

Berkowitz: Yeah I think I got screwed by that because I think they thought I was terrible. The first one was just because there wasn't much in the pack for me, but once you have one Fractured Loyalty you should value the second one a lot higher. The third one, I would have picked over Shatter, especially in this deck. I don't think any of them are even going to know, to be honest. I think they were expecting me to scoop them up and put them in my sideboard.

Sideboard: What do you think your mana will look like?

Berkowitz: Fifteen lands. I only have a Talisman, no Myrs. That's not good, but strictly because this deck is so bad compared to the rest of the table, and the cost of my deck is so low, it's okay. I've played thirteen land in a deck before. I love having a deck with five or six Myrs and Talismans. I'm all about them, but I had to pick Wizard Replica over Iron Myr, which I would never do but I had to. I need to be able to block. I don't want to draw too many lands. I'm fine with drawing three to four land the entire game with this deck. If their decks are that much better than mine but I'm drawing three spells for every one of their two, I can definitely get an advantage right there. It gives me a slightly better chance against most of the decks.

Sideboard: How do you think you'll do with this?