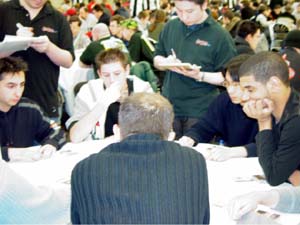 the first draft of the weekend got underway table one table one featured an impressive array of name players from all over the globe. The most well-known players were a pair of Americans. Dave Williams and Matt Linde were separqted by two seats and both drafted green-white decks; Dave's sporting Molder Slug and Matt's featuring Glissa. Stefano Gattolin from England also had a green white deck with Glissa-it came to him as a fourth pick in the last set of packs-and the still potent Warhammer.

Linde was pleased with the draft although he was nervous about some of the other decks at the table, "I like it. Big guys and fliers. I wanted to get Blinding Beams but i had to take like Deconstruct over it. There were so many Myr Enforcers and Bonesplitters that I had to take Deconstruct-at that point the only artifact removal I had was a Shaman. I am even running Turn to Dust in my maindeck because of all the good equipment." In addtion to a multitude of Bonesplitters there was a Mask of Memory, Fireshrieker, Battlegear, and a Warhammer to worry about.

The last team Pro Tour is the only Pro Tour in recent memory that did not feature Japanese players. Akira Asahara and Grand Prix Shizuoka Top 8 finisher Yusuki Sasaki were both hoping to be part of keeping that trend rolling along. They each drafted blue-red decks. Asahara's best card was clearly Grab the Reins while Sasaki hoped to ride his Broodstar to victory.

France's Raphael Levy has Top 8 finishes in both a Pro Tour and a Grand Prix but has been lying low of late. He was hoping to reverse that trend with a nearly mono-black deck that was touching blue for a pair of Domineers. He was not terribly happy with the finished product though, "There were only two players in black, which should have been good but there wasn't enough removal. No Irradiates were opened and I don't remember a Terror." With a Molder Slug and two Glissas runnign around there was reason to be scared although he did have a Betrayal of the Flesh and Barter in Blood. Raphael thought he could muster a 2-1 finish, "Maybe I'm 1-2, I don't know..." 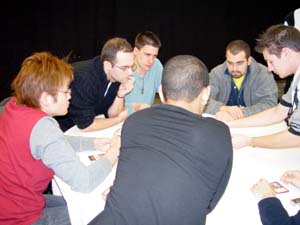 The other black drafter was a relative unknown from Romania, Radu Viseroiu. He had the Terror that Levy could not recall as well as a pair of Consume Spirits and a Solar Tide.

Jelger Wiegersma is the hometown hero and is regarded as the best player to come out of the Netherlands. He was running an affinity-ish blue-red deck and was not happy during deck construction, "I don't like my deck. At the start it was just me and one of the Japanese players taking red cards but Levy ended up tqking some and then the other Japanese guy went red as well." Even Dave Williams took an early Electrostatic Bolt for his solid green-white deck.

Jelger shrugged and tried to make the best of things, "I have some fliers and some good equipment-I have ways to win. I have Spikeshot Goblin, which would be nice to see on the table." He predicted a 2-1 peformance if he got the right breaks but was prepared to go 1-2 with the deck.