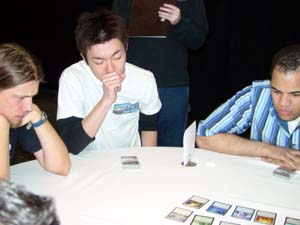 has had most of his success in Constructed Pro Tours- in fact, both times he played on Sunday (one time he won it all), the format was block constructed. Today, he's on his way to proving that he can get it done in draft too, as he swept his first pod for a perfect 3-0 record. His second table was filled with other undefeated players, including Yann Hamon and Mario Pascoli.

Osyp sat down in the first seat, and his pack contained Spikeshot Goblin along with no other red cards, making the pick easy. Yuri Kolomeyko to his left drafted Altar's Light, and as the pack came around, Yuusuke Yoshikawa in the eighth seat to Osyp's right took Leonin Scimitar and Lumengrid Warden. It didn't take long for the fighting to start, as Yuri opened a pack with Megatog and Looming Hoverguard, and took the Megatog. This put him in a bad position to the left of Osyp, who would be cutting off the supply of red cards for most of the draft. Yuusuke drafted Nim Shrieker to signal blue-black, so Osyp wheeled Razor Barrier and Auriok Bladewarden to go into white. The next pack contained plenty of quality white cards, such as Leonin Sun Standard, Pearl Shard and Blinding Beam, along with Spikeshot Goblin. The Blinding Beam got to Osyp, and surprisingly, Yuri wheeled Raise the Alarm and Pearl Shard to solidify himself as red/white, the exact same color combination as Osyp on his right. The next few packs provided Gold Myr, Krark-Clan Grunt, Pyrite Spellbomb and Skyhunter Patrol. Yuusuke opened his pack, and faced with no other high quality first picks for his deck, decided to take Spikeshot Goblin. This put Osyp into a very bad spot, as he now had to deal with red drafters on both sides as well as Yuri drafting white to boot. As a small consolation, the pack gave him his second Blinding Beam.

Yuusuke opened the next pack to go in the other direction, and all hell broke loose. He took Shatter, Yann next to him took Pyrite Spellbomb, and Shannon Krumick drafted Iron Myr. This made five players drafting some sort of red all next to each other, with another drafter a spot away bringing the total of red drafters at the table to six. Osyp wheeled Chalice of the Void and Rust Elemental, and from this point the picks all became mediocre because he was getting completely cut off, especially by Yuri who was in his colors. Yotian Soldier, Tooth of Chiss-Goria, Wizard Replica and Vulshok Gauntlets all found their way into his deck, while packs deep in removal and quality creatures in his colors were dry before they got to him. Eventually he got to open a pack, and it provided Icy Manipulator. Osyp opened the next pack as well, this time taking a second Spikeshot Goblin instead of another Icy Manipulator. Even in the other direction, most of the quality cards were being taken, leaving Osyp with the scraps. Essentially, because the table contained so many red drafters, they were all fighting with each other to scrap together something playable. When Shannon Krumick took Krark-Clan Grunt over Granite Shard, Osyp let out a small laugh, which changed to an "I can't believe it" grin of misery when Krumick opened Grab the Reigns. When the pack got to Osyp, he took Leonin Scimitar over Pearl Shard because his Spikeshots needed the help. The last two packs were far more helpful, providing a pair of Electrostatic Bolts.

Osyp: I wanted to shoot myself the entire draft. You saw what happened, right? When he opened the Megatog, I @&$% my pants. I knew he was going to take it, and fine, take it if you want, but I think he should have taken Looming Hoverguard. He knows I'm not going to get out of red, especially if I'm feeding him. The guy to my right…I told you before we started, Japanese drafters always end up messing me up. There were two at my table! (Yuusuke) shouldn't have taken Spikeshot, he should have just been blue-black Affinity and he would have had a good deck. Mario Pascoli definitely has the best deck, because everyone at the table is so retarded. Mario has like, five artifact lands and he got them all fifteenth pick because no one wanted to cack anything. Then he cacks the Arrest, and the guy he took it from didn't cack an artifact land fourteenth pick. I don't know. My deck should be much better.

The only pick I was worried about was whether to take a second Icy, or a second Spikeshot. The thing is, I think Icy is better, but there was so much artifact removal at the table already, and there were a lot of Tel-Jilad Archers. The only way I'm going to be able to win is with these guys (two Skyhunter Patrol), so I figured I'd hopefully get some equipment later on, which I did.

Sideboard: Yeah obviously that's why you took the Scimitar over…

Osyp: Over the Cub. It wouldn't have been good in my deck, but the Scimitar is insane in it. This way I can just win the cheap way sometimes. As much as I would have loved a second Icy, I don't think it would have been as good as the second Spikeshot.

Sideboard: I was kind of surprised, because I thought the table was just this massacre, where there were all these red drafters next to each other, but your deck still turned out okay.

Osyp: Yeah, I was surprised too. My deck is still pretty good. The green decks just have a bunch of artifact removal; Yann was the only one taking Archers. One guy was so happy he got Glissa, which is fine. The only people I'm worried about are Mario and Yann. I'm surprised, at my first table people drafted better than at this table, and this is the 3-0 table. The same thing happened to me last year, I started off 4-0 and everyone was drafting much worse at the 4-0 table. I don't get it.

Sideboard: Do you think the problem is that it's so easy and tempting to splash red in this format? You've got Shatter, Spikeshot, stuff like that.

Osyp: That stuff is good and everything, but blue-black Affinity is just a really good deck. That guy…splashing Spikeshot is not the greatest thing in the world, especially if you only have a Bonesplitter. I don't understand it, because later on in the draft, it's harder to take equipment early. Especially for blue-black, because it doesn't really want equipment. So late in the draft you've got this Spikeshot that you're either going to play and you're only going to have one Bonesplitter, or you're sacrificing picks like Somber Hoverguard and other things for equipment, which is not good in blue-black. That's why I hate splashing Spikeshot. Splashing Shatter is fine if you want, but in general I wouldn't sacrifice a blue-black pick for a red card.

Sideboard: Do you think that's the risk you take when you draft red; that other people are going to splash your color? Do you think this was more a case of the people at the table, or maybe it's some combination of both?

Osyp: I hate drafting red, just because I think it's overdrafted a lot of the time. The thing is, I opened the pack and there was Spikeshot and nothing else, so I took it. I don't mind picking a red card, especially in the first seat, because red is always a secondary color. I never make it the main color.

Sideboard: You seemed to be shaking your head a lot, like there was one guy who took…

Osyp:Krark-Clan Grunt over Granite Shard? I don't get that at all. Maybe it's in his deck. Granite Shard is insane…I honestly don't get it. I was just like, "Wow, what a genius." I see that all the time, people open insane cards and make the wrong picks. Like Yann could have really screwed me over in the last pack. There was an Icy, Viridian Shaman and Electrostatic Bolt. If he takes the Icy then I get screwed, because (Yuusuke) obviously takes the Bolt and then I'm stuck with the Shaman, which I'm not going to take. I think Yann is smart, and he knew the Shaman was just better in his deck. Also, when there's so much artifact removal, sometimes…even though Icy is insane, I think it's just better in booster draft.