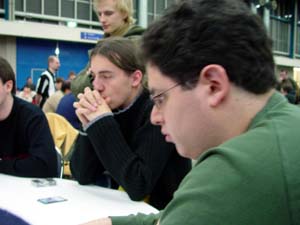 my Pro Tour New Orleans coverage I mentioned that Mike had recently gotten engaged to the lovely Rachel Reynolds. Well, I have some news this time as well. Less than a week ago, Rachel moved out to Seattle and started a new job at Wizards of the Coast as a Magic Online programmer. Once Mike finishes out his last semester of college, he's going to be moving out to the west coast to live with her. The problem is that, if you live with a Wizards employee, you can no longer play in sanctioned Magic events. What does this mean? Mike Turian, after quite a successful career, is soon retiring from the game. Pro Tour San Diego will be his last event.

He's currently sitting at 6-0, and some people are already predicting that he will win the entire thing. As Mike is one of the recognized Rochester draft greats, it's only fitting that I was able to cover one of his last Pro Tour drafts. The seating for table one was as follows:

Out of the next pack, Olivier stayed neutral with Leonin Scimitar and Mike took Viridian Longbow over Krark-Clan Grunt. Mike was looking to wheel Disciple of the Vault but unfortunately Pascoli took it first. From the third pack, Somber Hoverguard went to Olivier, Mike picked up another Goblin Replica, and Mario seemed to be moving towards affinity with a pick of Frogmite.

Turian's pack included Electrostatic Bolt, Myr Enforcer, and Goblin Replica as viable options. He looked through his pile carefully and then decided to take the Bolt. Mario strangely took Replica over Enforcer (so much for affinity) and Justin took the 4/4 artifact creature over One Dozen Eyes.

In the rest of the first round of packs Turian drafted Fractured Loyalty, Ogre Leadfoot, and Vulshok Berserker. The colors were breaking down something like this:

Justin's second pack included a Spikeshot Goblin that he first picked despite being in Green/Blue. Mike ended up with Skyhunter Cub over Atog and Ogre Leadfoot and a Sunbeam Spellbomb on the way back.

Out of Mario's pack, Mike took a second Vulshok Berserker. Then in his own pack he had a choice between Bosh, Lightning Greaves, Hematite Golem, and Auriok Transfixer. He chose the Lightning Greaves and cemented himself on the beatdown path.

Olivier opened and took a Spikeshot over Nim Shrieker. Then Anton took Arrest over Shatter and Kim took the Shatter, also showing a willingness to splash Red. Seven people at the table now had taken a Red card with a high pick. For Kim's first pick, though, he took Cathodion over Electrostatic Bolt, giving the Red card to Bernardo.

In the next couple packs Mike added Leonin Elder, Razor Barrier, Sunbeam Spellbomb and Tooth of Chiss-Goria to his pile. He then got a fifth pick Blinding Beam out of Bernardo's pack. His deck seemed to be lacking creatures, which he remedied somewhat by selecting Raise the Alarm from Herzog's pack.

By now, the draft was looking a little more complicated:

The early packs of the final round gave him Talisman of Dominance, Scale of Chiss-Goria, Altar's Light (over Vulshok Berserker), Awe Strike, and Skyhunter Cub.

Out of Anton's pack Mike picked up a third Blinding Beam without any other real options. Olivier's pack was terrible, offering Vulshok Berserker over Raise the Alarm and Auriok Transfixer. Mike's final pack presented these options: Crystal Shard, Electrostatic Bolt, or Goblin Replica. His Talisman of Dominance provided an incentive to splash, but Mike went the consistent route and took the Bolt. Justin picked up his second Crystal Shard.

Mario's pack was extremely deep, so Mike was able to wheel Raise the Alarm and Dragon's Blood. He then picked up a Neurok Hoversail and hated a Predator's Strike to close out the draft. The final colors didn't change much from the previous, but here they are:

There were only two Green drafters at the table, so both of those decks have predictably high card quality. Strangely, despite this they both chose to take Red cards at one point. The color Blue was also drafted sparingly, which put Justin in the perfect color combination for the table. He could easily 3-0 this draft.

Turian's deck is very solid, with a lot of aggressive potential and three Blinding Beams to back it up. The Beams should also help him against the otherwise dominant Green decks at the table. I would predict a 2-1.