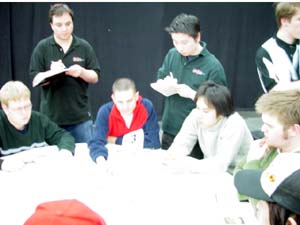 Walls sighed deeply when he saw the sat down for his third draft of the weekend. His good friends Ben Stark and Richard Hoaen were also at the 5-1 table, which would normally be the makings of a very cooperative draft. Gabe was sighing because his friends all sat one player apart from each other-one Japanese player apart. "The Japanese sandwich!"

That is not to say that the Japanese players were not good. It was simply that Japanese players subsribe to a different strategy than most Pros when it comes to Rochester. They tend to be more aggressive and far less cooperative than players from any other countries.

True to Gabe's prediction-or perhaps because of it-Yoshitaka Nakano veered suddenly into white one seat to Gabe's left. He had been solidly green-red to that point and Gabe nearly fell out of his chair when a Skyhunter Patrol that the American had all but licked to mark as his went on top of Nakano's pile instead.

"He ended up with a Cub and a Patrol I wanted-I'm short on guys now. I only have thirteen, that's how I could lose." Gabe's deck was considered to be the best at the table. He had a pair of Luminous Angels, Solar Tide, and three copies of Blinding Beam. His Skyhunter Cubs could expect to be equipped with a pair of Banshee's Blades, "Are these good? Opinions on the Blade keep changing."

When asked about a Terror he seemingly counter-drafted from Hoaen, Walls was quick to point out, "That was not a hate draft. There was a Spy for Hoaen-I would not have taken it otherwise. I might not play it but I wanted removal."

If anyone in the draft was in a position to switch into white it was his friend Ben Stark and Walls suspected that he did not out of friendship despite being in good position two seats to Walls' right. Stark confirmed this, "If Gabe wasn't to my left I would have been white. He had three white cards before I had a color so I didn't want to force him out. It is for the best though. His deck is insane and mine would not have been because the two Angels and the Solar Tide were opened where I could not have gotten them."

"I wanted to draft Affinity and I was in a good position to do so." Ben was reasonably pleased with his deck althought the cards did not fall the way he expected. "The blue cards weren't coming and I was going to bail but Broodstar…"

Richard Hoaen was also grumbling about Nakano's picks, "My deck would have been much better with the Myr Enforcer and Incubator the Japanese guy took. He was green-red and he takes Myr Enforcer-whatever!"

Hoaen was concerned about his deck's lack of artifact lands and the fact that he could not play his trademark Nim Lasher. In the previous draft he played Lashers while a Platinum Angel rode the bench, "I need the lands to play the Lasher-I love that guy!"

There was much talk this weekend about what card one would take over Loxodon Warhammer but with the lone exception of Justin Schneider they always went first. Tomi Walamies was one of the lucky players to open one but he actually considered taking Terror over it. "I was looking for cheap removal and that was the only Terror I saw. Black-red needs cheap removal because its creatures are inferior to its opponent's."

Tomi was staring at three deep stacks of Slith Bloodletters and Goblin Replicas while he was building, "I plan on winning with ridiculous Sliths or with Replica and Scavengers." He had to cut a Rustmouth Ogre he picked over a Beserker because he could not afford to play many red lands with his Sliths and Consume Spirit, "I should have taken the Beserker."

"I feel that if I had gotten any Terrors, Bolts, or red Spellbombs I would have the best deck at the table. As it is I am vulnerable to a fast draw. I think either Gabe or me stand the best chance of 3-0 at the table. I don't know if he got enough creatures but triple Blinding Beam…"

When asked about the Japanese contigent at the table Tomi shrugged, "I don't know what they were drafting but they were all 5-1 so they must know what is up. Their style is very different."