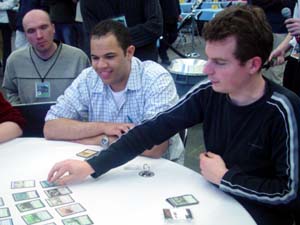 a Top 8 draft table this collection of talent would have been stunning. The fact that they were sitting down to a draft that would determine which of them could make a Top 8 lent this final draft of the day a sense of drama and urgency. Scott Larabee literally had to push spectators back beyond the roped off boundaries as they were clamoring to get a better view.

Mike Turian and Nicolai Herzog were anticipating playing each other (for the second round in a row after a grueling unintentional draw) and there was a lot of buzz about them having a very competitive draft. Osyp, who needed one less win than either of them to clinch a Top 8 berth was also talking about drafting in such a was as to improve Mike's chances while hurting Nicolai's.

The draft was largely uneventful as far as hate drafting with all eight players mostly sticking to their guns. Mike and Nicolai sniped a few late picks from each other but when Nicolai had the chance to take a Solar Tide that was heading straight into Mike's pile in the final pack he chose instead to take Leonin Scimitar. Anton Jonsson, on the other hand, took a Megatog in the second pack that was in neither of his colors and likely unplayable for him.

Mike Turian's first picks were Viridian Longbow, Myr Enforcer, and Loxodon Warhammer. After the draft he had mixed feelings about his table. "Okay it was pretty annoying that I knew I would be playing Nicolai because it upset the draft with us right next to each other."

He pointed to his four Vulshok Beserkers and smiled, "I am pretty happy about these. I really would have liked a Blinding Beam but my only real chance at one was when I had to take Solar Tide over it." Some observers were startled that Nicolai allowed him to get the Solar Tide instead of hating it up. 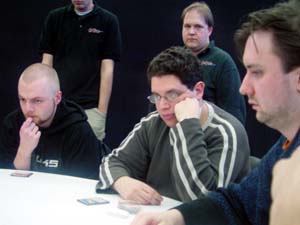 When asked about whether or not they were hating each other Mike was non-commital. "Yes and no. There were times we took cards from each other-like the Nim Shambler I took but not so much. I let him bounce Consume Spirits off of me-I don't even like that card."

Don't mention Anton Jonsson to him. Apparently Anton had hated a card away from him in a previous pod this weekend. "That man is personally trying to keep me out of the Top 8. He took a double red splash card when he already had a million fatties. I guess there was no pick for him but it could be because he is friends with Herzog."

Mike was very pleased with his deck and expected to get the two wins he needed to secure the berth. "This deck is very good-especially for this table. There were no Spikeshot Goblins and only like one Icy. There is only one Warhammer that is not in my deck-plus I have the Longbow. Longbow is insane-I told people it was good. Did you see how everyone was first picking it? The bow is insane!"

Despite having to face a Loxodon Warhammer in his first match-up, Mike chose not to play his Soul Nova, "Because it sucks. You have to somehow convince your opponent that you have five open mana and nothing to do with four cards in your hand. I hate it."

Osyp Lebedowicz needed to wrangle only one win and a draw to secure his Top 8 berth. His deck looked like nothing short of ridiculous while he was drafting. He was the only blue drafter for a stretch of more than half the players and got late pick Looming Hoverguards, Domineers, and a Broodstar. He also opened a Pentavus.

Despite his good fortune Osyp was not exuding confidence. Osyp is going to be shedding forty-one Pro Points over the next two events and was concerned about his seat on the gravy train. "I am so nervous that I could honestly not tell you if my deck is good-it may be but I would have liked even one more Myr or Talisman. Affinity likes to have some combination of four Myr/Talisman. I only have two and I have to run a higher land count now to support my bombs. Higher land count could equal mana flood." 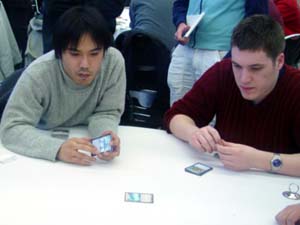 "It was a tough deck to draft because I was trying to draft for me and look out for Turian at the same time. That is why I moved into black. It turned out well for me because nobody besides Herzog and Budde were playing black."

Osyp did not think Kai's deck turned out especially strong and neither did Kai. The German Juggernaut needed only one win and a draw to make Top 8 but he was convinced he could not pull it off. "I don't think I will get it-this deck is horrible. There were no cards in any colors for me. The packs were just awful. I had three players behind me not playing white and they opened zero white cards. Just look at my first picks-Terror, Shambler and Shatter-they are okay cards but not especially exciting first picks."