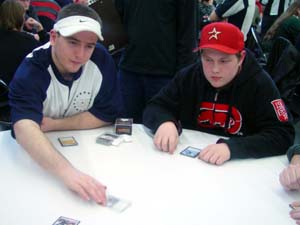 Hoaen is one of Canada's finest, and is looking to show that his Pro Tour Yokohama Top 8 at the end of last season was not a fluke. After four drafts, he found himself at Pod 2, with a shot at playing tomorrow. Helping matters was the fact that fellow Canadian Aeo Paquette was to his right, which ensured more cooperation than usual. His table sat like this:

Takuya Oosawa opened the first pack, and took Leonin Skycaptain. Brucker drafted Somber Hoverguard, Paquette took Tel-Jilad Archers, and Hoaen drafted Pyrite Spellbomb. Brucker opened the next pack, and interestingly decided to take Shatter over Vedalken Archmage. At first, I was convinced this was a terrible pick, because I was under the (apparently false) impression that the Archmage was a better card. On top of that, the pick encourages players next to you to go into blue. After consulting with some pros after the draft, most consider Shatter to be better than the Archmage, and think that making a player to your left a blue drafter isn't a huge deal. So, Brucker took the Shatter, Paquette drafted Skyhunter Patrol, and Hoaen quickly grabbed the Archmage. From this point on, he focused on drafting an affinity deck. When he opened his pack, it didn't have anything particularly impressive, so he drafted Frogmite over Mind's Eye. He managed a wheel of Nim Shrieker and Nim Replica, and used the next few packs to get a Talisman, Slagwurm Armor for his Nims, Pewter Golem and two copies of Assert Authority. Hoaen was now in a good spot, with Kevin Quirk drafting red-white on his left, and Aeo Pquette in white-green on his right. Soul Foundry came to his deck as well, and Hoaen picked up a second Pyrite Spellbomb for lack of anything better.

Hoaen's second pack was far better than the first one he opened, presenting Domineer, Somber Hoverguard and Bonesplitter as potential picks. Surprisingly, he took Somber Hoveguard- many players would have taken Domineer without hesitation. A few boosters later, the pack came around to Kevin Quirk, who had no picks and hatedrafted a Cobalt Golem away from Hoaen, getting a pretty angry look in the process. Given the opportunity for Domineer as a sixth pick, Hoaen gladly took it the second time around. As the draft progressed, Hoaen looked to round out his deck. He took Silver Myr over Thirst for Knowledge, and a Talisman of Dominance earlier than usual because he realized he needed the acceleration. When two packs provided little in the way of blue or black picks, Hoaen was able to get a Shatter and an Electrostatic Bolt, which made for a fine splash since he had two Pyrite Spellbombs from earlier in the draft anyway.

Sideboard: How do you think it went?

Hoaen: Alright. There was so much artifact destruction at the table. I always draft affinity, this is my fifth time this weekend.

Sideboard: And so far it's worked pretty well.

Hoaen: Yeah, it works really well. Usually I have Nim Lashers or something. There weren't any at this table.

Sideboard: I was really surprised by Brucker's pick of taking Somber Hoverguard in the first pack, and then opening Vedalken Archmage and taking Shatter instead.

Hoaen: Yeah, that was weird. I guess he just doesn't like the Archmage very much. I dunno.

Sideboard: Isn't it one of the best blue cards?

Hoaen: I think so. Maybe he wanted to signal red or something, it seems reasonable.

Sideboard: Was the plan that you and Aeo…

Hoaen: We didn't really have a plan. He took Archers over Spellbomb, but I think he knew that I always draft affinity, and just drafted around that.

Sideboard: The packs you opened didn't seem too good…you took a Frogmite out of one.

Hoaen: Yeah, there was a Mind's Eye in that pack, but I don't like the card too much. Frogmite isn't necessarily better, but I think it is in the archetype.

Sideboard: Do you think that the archetype you were aiming for came together well this time? Is there something missing?

Hoaen:Nim Lashers? I don't know, it's different this time. Hoverguards are really good, and I try to get as many Frogmites as possible, but there was only one. I was missing mana for a long time in the draft, but I got a Talisman and a Myr at the end. It's really important to have acceleration.

Sideboard: Were you planning to splash red the whole time, or was it just a case of "I've got nothing but this red pick here"?

Hoaen: No, I was pretty sure I was going to be splashing red the whole time. I don't mind playing off-color spells anyway. I was probably going to play mountains no matter what, hopefully getting Great Furnaces.

Sideboard: The guy next to you took…

Sideboard: You seemed a little pissed off.

Hoaen: I was just surprised. We had seemed to be getting along well, and he just randomly took that. I don't know, he might have thought he was the wheel or something. He did give me the Vault of Whispers in the next pack, so I think he recognized it was a mistake.

Sideboard: Was taking the red a way to get back at him?

Hoaen: No, not at all. I already had red cards, and I only took Electrostatic Bolt and a Shatter.

Sideboard: You took Somber Hoverguard over Domineer. Why was that?

Hoaen: I just think it's the better card.

Hoaen: Yeah. Domineer is double blue, and Hoverguard is really good in the archetype.

Sideboard: How do you think you'll do in this draft? Top 8 or no?

Hoaen: I don't know. Maybe. Hopefully I'll play against the Japanese guy who was going crazy. It's possible, but Eugene's deck seems pretty good. He got One-Dozen Eyes insanely late, and Eugene is insane too.