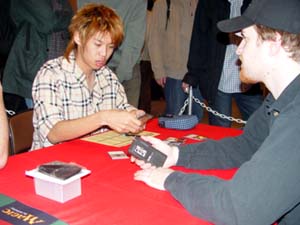 Katsuhiro Mori was one of Japan's most famous players, noted for his frantic style of play and ability to put up big finishes. It seemed that as good as he was, he was destined for even better things. Then, all at once, he decided to retire at Japanese Nationals. As many have learned over the years, it's difficult to give up the game, and Mori became another example. He returned to competitive Magic, and not only looked like he hadn't lost a step, but the time away may have made him even better. He came in tenth at Pro Tour Kobe, and finished yesterday's sealed portion of the event in seventh place. If he can maintain yesterday's performance, he'll find himself in the Top 8.

The first pack contained Goblin Dirigible, Leonin Den-Guard, Consume Spirit, Cobalt Golem and Tel-Jilad Chosen. Mori went white with the Den-Guard, and when he saw Blinding Beam in the second pack he grabbed it right away, barely looking at the rest of the pack. The white kept coming as two Skyhunter Patrols came third and fourth, and Vulshok Gauntlets fifth. Two late Leonin Elders helped round out the curve a bit, and a very late Roar of the Kha was a nice gift. The second pack wasn't quite what Mori had been hoping for, since the possible picks were Skyhunter Patrol, Vedalken Archmage, Viridian Longbow and Goblin Replica. The Archmage is extremely powerful, but Mori's deck was the furthest thing from artifact heavy. Even though he was still only one color, it wasn't an option, and he took his third Patrol. The next pack had a Myr Enforcer that most decks would love to take, but once again it wouldn't fit into Mori's deck- instead, he leaned into a second color with Goblin Replica. Meanwhile, the Archmage and Enforcer went to Sam Gomersall, who was putting together a strong deck thanks to Mori's non-artifact focus.

Any doubts about a second color were answered when Mori got Glissa third pick. He took Tel-Jilad Chosen after it to go further into green, passing Altar's Light. Damping Matrix went into his deck as well, since he had less cards that would be affected by it than the average deck in this format. Darksteel rounded out the deck, giving Mori an Echoing Ruin to make red a viable splash, along with Mirrodin's Core to make the mana a little more consistent. A pair of Vulshok Morningstars would be great on the Patrols, and Stand Together came around eighth pick.

Mori: My deck sucks. I thought I would go green since it tends to be underdrafted, but there were no good green cards that came around.

TW: Well, you only went green when you got Glissa. Before then, you passed a few because you were establishing yourself as a white drafter.

TW: Was that your plan from the start? Most players in the first pack would have taken the Consume Spirit, Tel-Jilad's Chosen or Cobalt Golem instead of the Den-Guard. Lots of players don't like to seem white now in this format.

Mori: I was looking for first turn plays, so I went with white.

TW: So it's not necessarily that you sat down looking to draft white, as much as you wanted to draft a more aggressive deck?

Mori: Yeah. When I looked at the pack I opened, I decided that going aggressive would be the best idea.

TW: Is there a reason why the other cards make you decide that?

Mori: Well, you usually end up having to go at least two colors, and when you do, that makes cards like Consume Spirit weaker. Also, since a lot of people tend to go for black, I didn't want to draft it.

TW: So do you think that the conventional wisdom that white isn't good enough is false?

Mori: I think that green is probably the weakest color, and then white. But, it's not necessarily that they're the weakest colors, only compared to say blue or black they don't have the same power level.

TW: Were you banking on the fact that people wouldn't draft it, and you'd be able to clean up?

Mori: When I saw that the Leonin Elder was coming around late, I realized that no one was drafting white, so that would be a good choice. I could get good, solid creatures.

TW: When we sat down, you said that your deck sucked. What cards are missing that you'd like to have in this deck?

Mori: I have no removal, so another Blinding Beam or even one Arrest would have been great.

TW: In the second pack, you had a choice between Skyhunter Patrol, Vedalken Archmage, Viridian Longbow and Goblin Replica. You seemed to be a little irritated by the cards. Were you contemplating taking the Archmage and switching gears? Or was the Patrol the only choice, and you were just bummed out about it?

Mori: Yeah, I was upset that the cards I opened were weak for me, and didn't have much selection. I don't think I made any mistakes in the draft, but the reason I took that Patrol was that the cards wanted me to draft white, so I did. 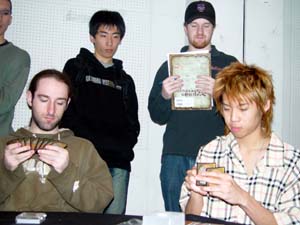 TW: How about the Damping Matrix? It seems like it could be pretty good in your deck.

Mori: Since I have two Morningstars, a Loxodon Mystic and Auoriok Glaivemaster, I probably won't maindeck it. It'll probably hurt my opponent's deck more than mine, but I don't want to put it into the main and end up tangling my own feet and tripping. But, if my opponent has lots of cards like Spikeshot Goblin that tap to do something, then of course I'll bring it in.

TW: What do you think your record will be?