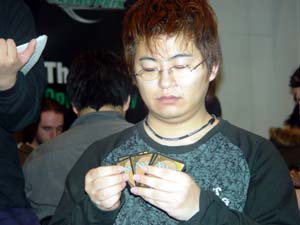 Japan, Jin Okamoto is practically Magic royalty. Labeled "The Last Emperor" due to being the last APAC champion, Okamoto has made a career of great finishes on the Pro Tour and Grand Prix circuits, culminating with a finals appearance at Worlds this past summer in Berlin. Coming into this draft, all the emperor needed was one more win to make Top 8 and add another accomplishment to his legacy.

The first pack was almost as good as it gets, giving Okamoto a clear first pick, as he took Pentavus while passing Looming Hoverguard and Terror. He was shipped yet another bomb rare, taking Solar Tide and passing Spikeshot Goblin and Blinding Beam. He couldn't have been too happy about passing a good white card, but that was likely a minor concern. In the third pack he interestingly took Skyhunter Cub over Taj-Nar Swordsmith, and followed up with Silver Myr and Thoughtcast, going into blue. The affinity plan seemed to be coming together, as he got Frogmites ninth and tenth pick.

Pack two was a bit of a heartbreaker. Okamoto opened Betrayal of Flesh, Arrest, Shatter and Altar of Shadows. Clearly, Betrayal of Flesh is the card you want here since it's easily splashable, but Okamoto decided to take Arrest, staying within two colors. This plan fell apart, as he was passed another Betrayal, and this time he took it. From that point on, black cards kept coming, and he was practically forced into the color. Skeleton Shard, a fifth pick Pewter Golem and a sixth pick Terror made him abandon blue, and rightfully so. Not a bad situation to be forced into, but he could have had two copies of Betrayal of Flesh. Towards the end of the pack, he made an odd choice, taking Steel Wall over Irradiate. In Darksteel, he took a first pick Morningstar. The second pack presented a very odd choice, giving him the option between Emissary of Despair, Emissary of Hope, and Essence Drain- he took the white Emissary. Test of Faith gave his deck a great trick, and he took Pteron Ghost over Arcbound Bruiser.

Okamoto: It was a little rough going, but I got two rares so something will come out of it.

TW: Yeah, you must be pretty happy to open Pentavus and then get passed Solar Tide.

Okamoto: I was happy then!

TW: Well, what made you less happy? What went wrong?

Okamoto: I didn't know what to take. It got to a point in the draft where I'm like, "What should I take? What's going on?" I was having trouble reading the flow.

TW: I'm guessing you mean the second pack when all those great black cards kept coming. Normally that's not a problem, I mean you may need to adapt a little but I don't think that's a bad thing necessarily.

Okamoto: Yeah. I decided, "Screw it. If black cards are going to come, I'm going to take them."

TW: Well, at first you went blue as a second color. Do you think the trouble stemmed from not switching into black earlier?

Okamoto: I originally wanted to go blue, so I was looking to do that. Maybe now, yeah there is some regret. I should have gone into black earlier, and I was kind of indecisive.

TW: Right, especially when you pass Looming Hoverguard. You'd have to think that you're not going to see a lot of blue cards.

Okamoto: Blue is really good in Darksteel, so I didn't care about the Hoverguard. It came from the other side, so it didn't really matter.

TW: You opened Arrest and Betrayal of Flesh, and decided to take the Arrest and stay in your colors and play nice. But, then a second Betrayal came and you took it.

Okamoto: I only need one win to make Top 8, so I didn't want to pass cards that are too good.

TW: Steel Wall over Irradiate. What's up with that?

TW: I also noticed that you were passing up Arcbound creatures for stuff like Pteron Ghost. Is that also because you didn't think you had enough artifact creatures?

Okamoto: I already had lots of expensive cards, so I figured I didn't need another high casting cost creature.

TW: In Darksteel, in the second pack, you had a really hard choice between Emissary of Hope, Emissary of Despair, and Essence Drain. Why did you take the white Emissary?

Okamoto: I want to live long enough to get my powerful rares out.

TW: Do you think you'll get your win with this deck? It seems likely.