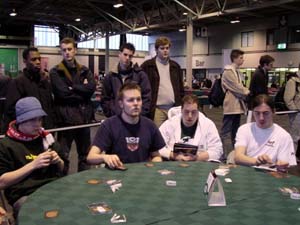 the first draft of the second day, and to everybody's surprise only one person is missing. The clock was set from winter to summertime tonight, so there were huge expectations of people being an hour late. This once though, gamers turned out to be smart and were actually all on time. The only person missing was an Englishman who hurt his leg.

While sitting down at table two everybody seemed calm and relaxed. I sat down between Jake Smith and Olivier Ruel, who at the time were blowing kisses to each other, making clear that they would be having a friendly draft, not hate-drafting a lot. Olivier has been red hot in this draft format lately, making GP and PT top 8's, and is really on top of his form. Jake is well known for being carried to the second place of the Team PT by his team, only winning a couple of rounds himself, while his teammates beat everybody. His teammates must have picked him for a reason though, and he is a pretty decent drafter.

The first packs got cracked, and even before they were told the could start drafting, Olivier had already seen his first pick, A Viridian Shaman was staring at him from the top of the pack and he didn't take long to think about it and almost immediately took it, after just glancing through the other cards. Jake, who was passing to Olivier, had a much harder pick. He could choose between, amongst others, Shatter, Skyhunter Patrol, Barter in Blood, Vulshock Battlegear and Goblin Replica. He chose the always more than decent Shatter, making a solid pick there and looked to not be drafting white after passing the patrol.

Olivier obviously picked up the patrol, liking white as he does, and didn't seem bothered at all by the fact that Green/White isn't a favored archetype usually. It is fine in this format though, since now green and white DO have the removal. Jake took a Somber Hoverguard in his pack, clearly favoring the Affinity archetype, since he took it over Tel Jilad Archers, Pyrite Spellbomb (in color, with his shatter) and Irradiate.

From then on our two heroes settled in their colors and just picked the best cards for their deck. Jake missed a couple of shots at artifact lands though, which are really important in the affinity archetype, and which he regretted later on. He also took a Nim Shambler pretty early, which doesn't look to be in color, but maybe it will be, since this archetype usually has so many artifacts that three colors is pretty easy to play. Olivier also got a really late Taj-Nar Swordsmith, which made him really happy, as his colors were starting to dry up at that point.

After the first pack was done, Olivier decided it was time for some fun. So he just started throwing pieces of paper at Jonny Chapman across the table. Jonny at the time was busy playing his "International Terrorist" Roll, with a scarf in front of his mouth and everything. After the calls of Judge yielded nothing, he just decided to start chucking back the pieces of paper and let it be done with that.

After dodging the retaliation attempts, Olivier opened and saw a booster with Tel Jilad Archer, Myr Enforcer, Barter in Blood, Goblin Replica, Cathodion and Silver Myr. Recognizing how important two drops are in this format, and how important Mana Myrs are in general in green decks, he picks up the off-color myr. This pick seems weird, but that's the difference between people who really know the format, and people just picking the best card. You need to draft a good deck, not just a stack of cards. Jake meanwhile just opened Loxodon Warhammer and picked it. Sometimes the good cards are good enough. In any deck…

Following up his Silver Myr pick there was an Iron Myr pick for Ruel, not caring what colors the mana was, just wanting the colorless. Jake got the Myr Enforcer for his Affinity deck and was quite pleased. The rest of the pack was quite simple, with no real hard picks for either. Jake still only got one artifact land though, and is solid in three colors now, which isn't the best for him. His deck has 3 Somber Hoverguards and a Myr Enforcer though, not to mention the Loxodon Warhammer. Olivier filled out his deck with some tricks, two Battlegrowths, and some decent guys. His highlights are 2 Skyhunter Patrols, Mirror Golem and the Shaman. 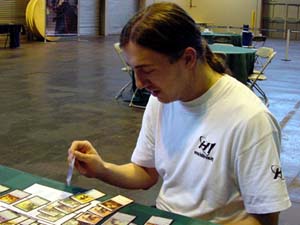 Opening the Darksteel pack, Olivier got rewarded for taking white, as the only really playable card there was a Razor Golem, which is a great man and a first pick anyways, so he took that. Jake opened a better pack though. Barbed Lightning, Dismantle, Chittering Rats, Pulse of the Tangle and Leonin Battlemage. All great cards and mostly first picks in their colors. Valuing direct damage and creature kill over everything, he took the Barbed Lightning. Olivier had a nice choice from this pack too, and took the Battlemage over the green pulse. He later explained that he wasn't sure what was the better card, but with Razor Golem and two patrols was heavier white then green, so the GG would be hard to come by. He also had a couple of Transfixers as early drops, so the pulse wouldn't be bought back often, and the Battlemage might even be the better card! Enough reasons, so most likely the right pick. After this great start though, things started drying up fast for both of the players. They got some decent picks, Emissaries for both of them, some removal for Jake, and another Razor Golem for Olivier. Jake hated an Emissary of Hope from Olivier though, showing that the kisses he blew him earlier were not gonna hold up forever, but rewarded that a pick later when he shipped a pretty late Stir of the Pride for Olivier, which made the Frenchie really happy.

At the end of the draft both players seemed fairly happy, and both their decks looked pretty good. They were both kinda happy, so we'll see. They played each other first round and Jake won because of bad plays and draws by Olivier. Their biggest opponent in a quest for a good record, Nicolai Herzog, has drafted the worst deck in his life though, so everything's possible.