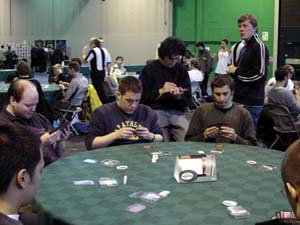 could hear some chats in German as the players of table 3 sat down for the first draft. Not less then six of them were either Austrian or some of Kai's countrymen. Kai was in seat 3 and had to his right the only English player of the table (who was actually born in Germany too) while Markus Joebstl and Reinhard Blech, who are probably the two other best players of the pod (or at least most well known), were seated on his left.

Kai was happy to find a Platinum Angel staring back at him when he opened his first pack, while Markus had more of a choice as his pack contained Bonesplitter, Skyhunter Patrol, Lightning Greaves, Predator Strike and Neurok Spy. He took the artifact path as well - picking Bonesplitter over Neurok Spy, which he told me after the draft he thought was more powerful, but he was concerned by Blech's affinity for blue cards. Kai then picked a Mirror Golem over Deconstruct while Markus had a tough choice again as Kai's first pack also had a Shrapnel Blast, a Mirror Golem and a Somber Hoverguard along with the Angel. He settled on the red card, probably trying to cut the color and to set Blech into blue for sure. Next few packs saw Kai pick an Auriok Transfixer out of a rather poor pack, then a Skyhunter Cub out of another pretty weak pack, a Gold Myr over another Deconstruct, and an Iron Myr over a Scythe of the Wretched. He was then glad to find a Serum Tank seventh pick as he flashed a Tooth and Nail back at me. In the meanwhile, Markus didn't have really many choices to make as the picks seemed pretty obvious each time. He got a Deconstruct third, a Tel-Jilad Chosen fourth, then another Deconstruct, a Krark-Clan Grunt, followed by Scythe of the Wretched. The rest of the pack was pretty uneventful for both players as Kai counter-drafted a Battlegrowth and a Turn to Dust really late.

The Englishman feeding Kai had gone White/Black as his stack included a couple of Blinding Beams, a Den-Guard, a Longbow, a Serum Tank and a Moriok Scavenger after pack one. Blech was looking to be Blue/Black affinity despite a second pick Skyhunter Patrol.

Blech had opened a Betrayal of Flesh in the first pack and was happy to show me his next first pick, an Empyrial Plate, even before the judge had announced players could look at their pack. Markus again had to choose between several decent cards and Kai had a grin on his face as he showed me his first pick - also an Empyrial Plate. Markus finally settled on Terror over Tel-Jilad Archers and Pyrite Spellbomb, which Kai scooped as his second pick over Raise the Alarm. He then got a Vulshok Battlegear and a Leonin Skyhunter followed by Leonin Den-Guard, Moriok Scavenger, W/U Talisman and Vulshok Gauntlets. Markus got a second Tel-Jilad Chosen second pick, then a Shatter third and didn't look to glad when he had to pick a Deconstruct fourth as he probably would have liked to get decent men. His next picks were Predator's Strike, Copper Myr, Vulshok Berserker (over a second Strike), Yotian Soldier and a late Creeping Mold.

Reinhard Blech's deck didn't look too good as even though he had good cards, he didn't seem to get enough.

Once again, Blech showed me the rare of his first Darksteel pack but this time, he had to pass it, as Pristine Angel didn't really fit into his mana curve. Kai picked an Echoing Ruin out of an empty pack (for his colors anyway) and Markus once again had a tough choice as his first Darksteel pack contained Arcbound Slith, Tangle Golem and Barbed Lightning. He kind of surprised me there picking the Slith, which I think I wouldn't have picked over any of the other two. The rest of his draft was uneventful as he, like the two first packs, didn't have many choices to make in the third one. He scooped up an Oxidda Golem second, the powerful Vulshok Morningstar third, the less exciting Tel-Jilad Wolf fourth, then Pulse of the Forge, Tangle Spider, Echoing Decay and a couple of Tel-Jilad Outrider to round up his deck.

Kai had to think a little more as he picked Barbed Lightning over Stir of the Pride and Morningstar second, Pulse of the Forge over Unforge, then Unforge over another Pulse of the Forge fourth, the indestructible Gargoyle over an Oxidda Golem. His next pack had only a Murderous Spoils and an Echoing Decay as decent cards and he obviously picked the easily splashable Spoils. He didn't get any goodies after that and counter-drafted a few more good green cards from Markus. 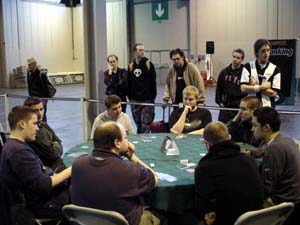 It seems like both their decks are pretty good but nothing spectacular either. Reinhard might have gotten screwed by the packs as his deck didn't seem too hot when I took a look at it after the draft, despite none of the two players on his right drafting any of his colors. The fact that Kai and Markus picked a few black cards now and then sure hurt him. Other then that, I think I probably would have picked the second Pulse of the Forge but Kai argued it wasn't the kind of card he wanted to draw two of in the early game while not being too sure what the right pick was and the Unforge remains an insane sideboard card. The Englishman ended up with what seemed like a fairly solid Mono Black deck splashing red for a Shatter and few white cards. If I had to make any predictions and without seeing the other player's deck, I'd say Kai, Markus and Reinhard probably should all go 2-1. Of course, it wouldn't be surprising if one of them won the pod but I heard Kai was facing a board of Pristine Angel and a Skullclamp during round 1 while his opponent was holding Grab the Reins and Solar Tide in his grip.