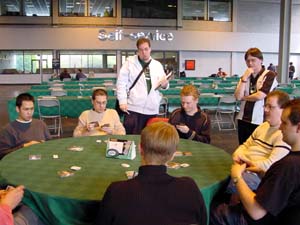 into the last draft table one looked like a very good one. Barbero, Jorstedt, Courtois and Karsten are all names being heard on the PT for the past years. Add to that the undefeated Rene Kraft and you have a very good draft table. Most of the people at this table have to win at least their first two to make top 8 though. Frank Karsten and Frederic Courtois are two of those people. Both of them have been on the PT for a long time without ever having that breakout win to make them really big names, but both are very good, solid players. Karsten was even called one of the worlds best (team) drafters by Kai Budde himself.

Opening the first pack, Frank went from the front, the commons, to the back. He stopped at the Grab the Reins that was staring back at him. Doing the routine check of the rare gave him a difficult pick though. It was Oblivion Stone! Favoring artefact in the early picks, and Stone being possibly the better card, Frank slammed down the rare, not thinking back of the Grab that could have been. Compared to that Fred had an easier pick, taking Slith Ascendant over fatties Bosh, Iron Golem and Fangren Hunter. Clearly favoring white, and also being good enough in the format to know that cheap spells are just better then the fat ones. Frank seemed to disagree when he got the pack though and picked his second rare in a row. His distaste for green showed through here, and the second best non green card being Vulshock Berserker he didn't need a lot of thinking time. Fred continued his first pick with a second white card, a Leonin Den Guard, this time passing another Berserker and a Plated Slagwurm. Frank continued his red path, despite passing the Grab the Reins, and picked up the Berserker, clearly showing he just wouldn't draft green by passing the Slagwurm, and trying to cut the red on the go. Fred had to make a choice though in his pack. No good white cards, and hardly any good cards at all made him pick a Deconstruct over Leaden Myr, even though he passed a lot of the green goodies. Frank then picked up the Myr and just continued taking artefact guys over colored ones, sticking to his plan of sliding in a color later. Fred took a Pewter Golem next, over a Soldier Replica, not being sure of his colors yet, and never really settled down. He got some equipment, but he stuck to GW pretty much with just the Pewter Golem in black.

The second pack definitely started off worse for Frank. After the bomb-ridden first booster all he got now was a Leaden Myr. All the good players seem to value their Mana guys really highly, and it seems to work out for them. The pack also had a couple of green artifact kill spells, but we know by now that Frank just will not go green. Fred would though, and after his first pick of Virirdian Longbow (which is getting more and more respect every day) snatched up the Deconstruct over a Creeping Mold. Frank's deck didn't really seem to work out. After his good forcing he only got a Goblin Replica out of the second booster this round, and he took it over Myr Enforcer and Cathodion. He clearly didn't like the fact that he was up to now unable to kill artifacts and definitely wanted in on the removal. Fred got a Creeping Mold out of that pack and seemed well on the way. After picking a Woebearer over Raise the alarm, which went to Fred, and picking up a Nym Replica, Frank's luck seemed to change as a Skeleton Shard was looking at him from the pack! Having nothing but artifact guys yet, and being black of sorts, he didn't even think for a second and picked it. Meanwhile the packs turned sour for Frederic, as he only got a couple of little guys to fill out his deck. He did pick a Taj Nar Swordsmith over a second Slith Ascendant and a Cub though, feeling that he needed to draw the Longbow in his deck to stand a chance.

So going into the last pack the decks looked like this: Fred had Green/White deck with lots of little guys and some equipments, but no green monsters. Frank's deck looks like a red black control deck with lots of artefacts, but not enough removal to really control the board. Knowing this they knew what they wished from the last pack, Frederic wanted Razor or Tangle Golems, and Frank wanted the RB removal, which there is plenty of.

The pack started out fine for Frank then, 'cause he got an Echoing Ruin, giving him some much needed shattering power. Fred on the other hand opened the nightmare pack for Green/White: Echoing Decay, Barbed Lightning and nothing much else. He picked up a 3/1 Protection from Artifacts guy from that pack, and all he could do is shake his head. He thought briefly about the Echoing Decay, thinking about the Pewter Golem he already had, but he didn't need a splash, he needed creatures! After that everything went like clockwork for Frankie. He took the Lightning Fred passed to him, and after that got two Chittering Rats, an Emissary of Despair, and a 9th pick Dross Golem! All Frederic could do while passing all these great cards was shake his head and take cards like Drill-Skimmer, Glaivemaster and Arcbound bruiser. He got a Morningstar and a Test of Faith too, but it still wasn't what he was looking for. 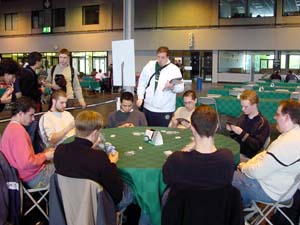 Looks like Frank's gamble of forcing Black Red artifacts worked out great. His early picks weren't that great, except for the stone, but his deck came together nicely. Frederic was a tad bit unlucky and didn't get the cards he needed, because they just weren't in the packs! Frederic wasn't happy at all, and I can't see him making top 8. Frank probably had the best deck at the table and will probably make it after playing, and beating, Fred first round.