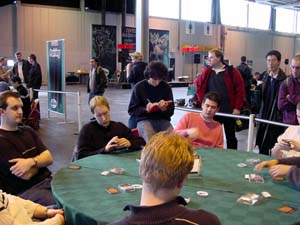 players 2-1'd their first pod and are still in contention for top 8 even though it will be way easier for Mattias who only needs a win out of the two first rounds to be able to ID into top 8 will Jose probably needs to win both first rounds.

Mattias, who was feeding Jose, opened a no-brainer and quickly picked Neurok Spy out of a crappy pack. Jose had to choose between Broodstar and Viridian Shaman. He hesitated way more then I would have before taking the Shaman. Green seems really under-drafted and you really need things to go well to make a Broodstar effective. Unfortunately for him, Mattias second pack was another no-brainer as One Dozen Eyes was the only really good card left and unfortunately for both, those first bunch of packs were some of the worst I witnessed and Mattias picks after this were in order: Banshee's Blade, Cobalt Golem, Thoughtcast, Banshee's Blade, Tower of Eons, Yotian Soldier and Lifespark Spellbomb.

Jose took the only good card left in Mattias's pack as his second pick, a Skyhunter Cub. He then got a Fireshriker that he took over a Wizard Replica before the packs quickly dried up. He got in order: Thoughtcast, Auriok Transfixer, Cobalt Golem, Dragon Blood, Nim Replica (over Annul) and Razor Barrier as his last relevant card.

While I was taking my notes, I could clearly see Mattias's disgusted look as well as Jose's headshakes. I could almost hear Jose's thoughts too, asking for a miracle…

And if it wasn't a miracle, it was a good start as the last card he discovered in his second pack was a Pentavus. He took a quick look at the rest of the pack before putting the rare on top of his pile while Mattias didn't take too long either before taking a Quicksilver Elemental. Jose then got passed another seven casting cost rare, not as good though as he picked Altar of Shadows over a Betrayal of Flesh. Mattias Blue/Green deck was falling apart as he took Spikeshot Goblin out of Jose's booster and Betrayal of Flesh third. They both got decent cards after that as Jose added the following to his White/Green deck: Auriok Transfixer, Creeping Mold, Wizard Replica, Leonin Den-Guard and Slith Ascendant (8th pick!!). He also took Cloudpost over Tel-Jilad Chosen 6th pick as he already had one (that's the spirit boys). Mattias on the other hand got Shrapnel blast fourth, Thoughtcast over Lumengrid Augur fifth, Lumengrid Sentinel sixth then Seat of Synod and Tel-Jilad Chosen. He then picked Tel-Jilad Exile ninth with a "I cant believe this" look when he saw a Skyhunter Cub was still there, staring at Jose probably thinking "what the hell are you drafting" even though he couldn't know Jose had got a gift Slith Ascendant out of this pack.

Darksteel was ok for Jose. Nothing to get excited about but overall pretty solid. He opened a rather weak pack and took Shikari out of it. He then took Razor Golem over Test of Faith, which is probably right but probably a very close call too. He got a Nomad Mystic fourth and took a Razor Golem over another Mystic fifth. Finally, he rounded up his draft with Infested Roothold, Reap and Saw, Darksteel Pendant and a late Phteron Ghost. Mattias got decent cards too as he opened and took a Vulshok Morningstar, then got passed Chromescale Drake. He had to settle for an Arcbound Stinger third pick. He then got in order Neurok Prodigy, Talon of Pain (over Arcbound Stinger, which he later regretted), Vedalken Engineer, which he scooped up very quickly and finally a Darksteel Ingot and a Darksteel Citadel to support his affinitiesque mana base.

Both their decks are unimpressive but they seem like they might get them the record they need to top 8 if the packs were as sub-par for the other players as they were for them. I have the feeling they both made the best out of a bad position.

It turns out they got paired together and Jose ended up scooping to Mattias as their match ended up in a draw. Jose now has to win out to top 8 while Mattias only has to get fortunate enough to get paired against someone that can afford a draw as well.