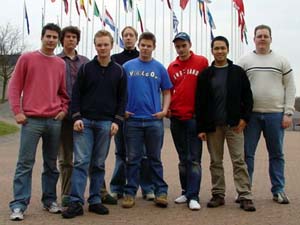 Mattias opened his first pack and was welcomed by what most people feel is the best equipment in the set, Mask of Memory. The cheap carddrawing is gamebreaking, and as Anton Jonsson put it: "I don't think anyone has ever lost once Mask of Memory has hit once". This might be a slight exaggeration, but since the next best card was a Myr Enforcer or a Tel Jilad Archers, Mattias didn't think long. Jose also had an easy pick mainly because his pack was just not as good. It contained Skyhunter Cub, Slith Ascendant and Fangren Hunter. Showing the distaste of most pro's for the green deck, he easily shipped the green fattie and just took the best white card. This caused a problem though as both players would now be in white, as Mattias, also not really liking green, took the Cub, which is of course ridiculous with the mask. Jose followed up his white pick with one of the best white spells in the set, Blinding Beam, and so two neighbours in the same colors were born.

As Mattias was passed another Fangren Hunter, he couldn't keep refusing the signal and just went for it. Though most people do not like green, if you are the only one, or one of two people drafting it, you can still get an amazing deck. Jose needed a second color too and took his first non white, non artifact card in Nim Shrieker as a 6th pick. Before that he had just stuck to his white cards and even took a Myr Incubator, maybe trying to go heavy artifacts. Mattias never got another white card, but the green kept flowing. He got a pair of Predator Strikes and a lot of decent creatures. Strange picks were Fireshrieker over his first Predator strike and Soul Foundry over a Tel Jilad Archers. He didn't really have a need for the equipment then, and nothing cheap to massproduce with the Foundry yet, but he clearly felt good about the picks.

The second pack Mattias would be passing to Jose, and when he opened the pack, he saw the same common run that he was passed first in the first booster. The Fangren Hunter, Skyhunter Cub run. Clearly still thinking about his mask, he picked the Gray Ogre, with dreams of flying card drawers ahead. Jose meanwhile opened and picked his second blinding beam. No matter how bad your guys are, as long as you have a pair of those you can just win unwinnable games. Mattias followed up his pick with a pair of Auriok Steelshapers, setting up a great Equipment engine, but lacking the great equipment. Granted though, this made his Fireshreaker pick earlier look like pure genius. Jose was meanwhile struggling trying to find playable cards in those packs as Mattias was taking all the good white cards over the good green cards, and black just didn't show up. Sure, he got Soldier Replica and Raise the Alarm, but he had to take them way earlier then he would have liked. After this pack, Mattias's deck looked great. He had gotten, in addition to the cards previously mentioned, a One Dozen Eyes, a Leonin Skyhunter, a Vulshok Battlegear 5th, which he really liked in his deck, and some filler guys. Jose got Duskworker and an Irradiate. Not cards of the same quality, that's for sure. But then again, Jose had the advantage in the last pack, getting to feed Mattias. 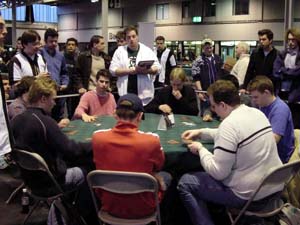 He started of well, taking Razor Golem as his first pick, over the extremely dangerous, but ridiculously expensive Heartseeker. Mattias opened a Fireball, and despite there being a couple of great cards for his deck (Razor Golem and Vulshok Morningstar), he decided that it was well worth the splash. After that he took a second pick Emissary of Hope, also not liking the cost of the Heartseeker, and even let the Bola stay in the pack, even though that looked great in his deck. Jose meanwhile reaped the rewards of being black in Darksteel, and got Essence Drain, Chittering Rats and Echoing Decay all in a row. He passed a Bola for one of them though, but that also didn't go to Mattias as he picked the Pulse of the Tangle over it. Mattias's deck had a couple of okay creatures more now, but still didn't get the equipment he needed. He even passed a Whispersilk Cloak by taking an Arcbound Fiend and picked an Echoing Ruin over some more. He got rewarded though for being green as he got a really late Tangle Golem, and would have gotten one ninth or tenth had it not been hate drafted by Jose. Jose meanwhile got some more guys for his deck, but nothing exciting after the great flow of black in the beginning.

Drafting the same colors next to each other normally never works out, and it looked like this time is the same. Both of their decks look okay, but are lacking the synergy to make them really good. They are both wonderful players though, so who knows what might happen. It doesn't look good though.