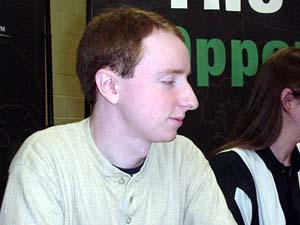 Eugene Harvey and Mike Turian are two of the more recognizable names in Magic today. Both have multiple tournament successes, and both came out of Pittsburgh as part of team CMU, although Eugene is more recent. Today they would be sitting next to each other for the draft, and Matt Linde, across the table from them, shook his head when he saw this. In booster draft, though, drafting with a teammate to your right is not necessarily the best thing - if they share your card valuations, they can easily end up drafting the same colors to your right, taking the best cards before you can get to them. Eugene was doubtless hoping this did not happen. There were no other big-name players at table 1, but each of them got here with a very good performance yesterday.

Eugene's first pack contained a Myr Enforcer and a Tel-Jilad Archers as the obvious best cards, and Eugene took the Myr Enforcer. Mike had opened a much deeper pack, with Electrostatic Bolt, Arc-Slogger, Wizard Replica, Skyhunter Patrol, Myr Enforcer and Altar's Light all being very playable. Mike grabbed the Arc-Slogger, the most powerful card, and passed the pack over to Eugene. Eugene picked up his second Enforcer, aiming him towards an Affinity deck of some kind, but many of the affinity cards are blue, and on his right Mike was taking a Looming Hoverguard for his second pick.

For his third pick, Eugene took a Skyhunter Patrol over a Silver Myr, trying to establish a second color. Mike looked through a pack with Aether Spellbomb, Isochron Scepter, Predator's Strike, Soldier Replica and Raise the Alarm before picking the Spellbomb. Eugene grabbed the Soldier Replica.

Mike's fourth pack had a Pyrite Spellbomb, an Iron Myr, a Duskworker, and a Talisman of Dominance, and he took the Spellbomb. Eugene's pick out of that pack was the Talisman. The next pack Mike looked at still had a number of playables, with Proteus Staff, Hematite Golem, Wizard Replica, and Cathodian all looking back at Mike. After much thought, he took the Cathodian. Eugene snubbed the Wizard Replica in favor of a Seat of the Synod.

Mike took a Seat of his own next, passing an Annul over to Eugene. The next pack, Mike took a marginal Wanderguard Sentry, sending the best card in the pack - a Nim Shambler - to his left. Eugene took this as a sign that black was available on his right, and selected the Nim as a shift from blue/white to blue/black. The rest of the pack was largely unexciting, though, as Mike just picked up a Regress and a Wizard Replica, while Eugene got a Scale of Chiss-Goria, and a Nim Lasher.

The pack that Mike opened next was not good to him. The best cards were Terror and Arrest, neither in his colors, and he chose a Leaden Myr rather than one of them. Eugene, now passing to him, had more choice with Terror, Arrest, Wizard Replica, Shrapnel Blast, and Myr Retreiver. He settled on the Terror, and Mike snapped up the Shrapnel Blast without hesitation.

Eugene then took a Pewter Golem over Serum Tank, Consume Spirit or Detonate. Mike again wasted no time in taking the red card. Eugene's next pack had two Talismans - Indulgence and Dominance - as well as Irradiate, Disciple of the Vault, Raise the Alarm, and Creeping Mold. Eugene took the Irradiate, leaving Mike to take the black/red Talisman.

Eugene had to think a while about his next pack, with Thoughtcast, Talisman of Impatience, Cobalt Golem and Clockwork Condor all presenting themselves. He finally selected the Talisman, and Mike also had to think about this pick, taking the Condor in the end. Eugene's next pick was clear, as a Looming Hoverguard was still in the pack, and he claimed the 3/3 flier.

The leavings from that pack were still fine for Mike, as he had his choice of Seat of the Synod, another Talisman of Indulgence, or a Wizard Replica, and he took the Talisman. Eugene got a Vault of Whispers, a Neurok Familiar and another Nim Lasher out of the rest of the pack, while Mike picked up a ninth-pick Needlebug.

Heading into Darksteel, Eugene took an Essence Drain first over Arcbound Bruiser, Arcbound Stinger, Echoing Ruin, and Purge. Mike's pack also had a Purge, as well as Unforge, Nim Abomination and the Spire Golem that he took. He passed the rest over to Eugene, who selected the Abomination.

The pack Mike got from the right had a third Purge in it, as well as Vedalken Engineer, Neurok Prodigy, and Vulshok Morningstar. Mike took the Engineer, leaving Eugene to pick the equipment over the flier. Mike then picked up an Echoing Ruin, leaving Eugene to take Arcbound Bruiser over Grimclaw Bats.

Mike took a while with his next pick, looking back and forth between Neurok Transmuter and Spire Golem - with an occasional glance at Heartseeker - before settling on the Golem. Eugene snapped up the Transmuter. Mike's next pick was a choice between three Arcbound creatures - Stinger, Hybrid, and Fiend - and he chose the Fiend, leaving Eugene to take the Stinger. There was another Hybrid waiting for Mike in the next pack, as well as a second Nim Abomination for Eugene.

Mike had one more real decision to make - his next pack had another Arcbound Bruiser as well as a Stinger. Mike decided to take his first Stinger rather than his second Bruiser, and shipped the Bruiser to Eugene. Mike also collected an Arcane Spyglass and an eleventh-pick Death-Mask Duplicant, while Eugene got nothing further of note.

Mike was overall happy with his deck. The Arc-Slogger was an obvious first choice, and he explained that when the second pack was missing a common but still had the Looming Hoverguard, he knew the player on his right, Josh Lampert, was not playing blue, as there is no blue common that should be taken over the Hoverguard. Also, he knew that Josh had played R/G yesterday in the sealed, and hoped that Josh would be selecting green cards again today. From there on he saw no reason to rethink his color choices. 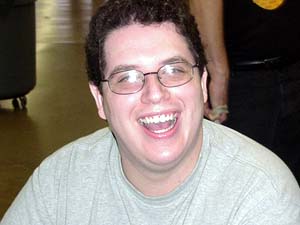 Mike also kept an eye out for black cards after he ended up with the Leaden Myr and two red/black Talismans, but didn't see any Essence Drains in Darksteel that might make him splash. He is running a couple sub-optimal cards, but expects the rest of his deck to make up for that. He is expecting to 2-1 with his deck, as he thinks that there is a really good white deck somewhere at the table that will give him problems.

Eugene, by contast, was not happy. His brief foray into white cost him a Silver Myr, which his deck could really use, and the black from Darksteel was almost non-existent. He is hoping to manage 2-1 with his deck, but expects that he may only go 1-2.