I followed defending U.S National Champion Antonino De Rosa to his draft pod he insisted on telling me, your humble reporter, that he is the best Limited player in North America. 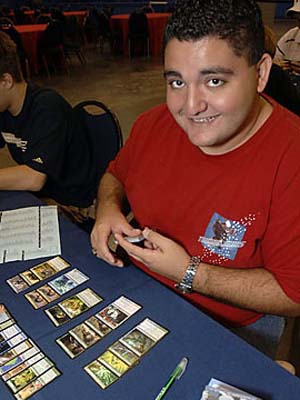 De Rosa was all smiles after Friday's draft.

Antonino was pretty fortunate in this draft. He had one of those drafts where he never had a tough decision to make. He started by taking the rare in Tolsimir Wolfblood over Disembowel and some walls in Drift of Phantasms and Carven Caryatid. Next he had a choice between Vedalken Dismisser, Siege Wurm, and Devouring Light. He spent a short while considering taking the Siege Wurm or Devouring Light, but eventually decided to move into another colour for the far more powerful card.

For the rest of Ravnica he got passed packs in which the best card was always green, making his draft quite easy. He took Vinelasher Kudzu, Farseek, Selesnya Sanctuary, Greater Mossdog, Transluminant, Pollenbright Wings, Remand, and Golgari Brownscale before the packs dried up. He seemed quite happy after the first pack, even going as far as inciting half the players in the room to put their thumbs up for him.

I was somewhat curious as to what his plan was for Guildpact, since up to this point he only had green, blue and white cards, which would have left him without a guild if he didn't start drafting another colour. My question was quickly answered when Antonino took Streetbreaker Wurm without any consideration for the best non-red, non-black card in the pack: Infiltrator's Magemark. He then took another Streetbreaker Wurm over a Ghor-Clan Savage, and Izzet Boilerworks.

With his next pick he appeared a bit concerned that he had moved solidly into a fourth colour, and took Izzet Boilerworks over a Wildsize which would have been a great fit for his deck. He then got passed a very deep pack with Exhumer Thrull, Douse in Gloom, Gristleback, Harrier Griffin, and an Orzhov Signet. Antonino seemed to waver between Orzhov Signet and Gristleback, eventually taking the creature. He then got a Silhana Starfletcher out of a pack with no other cards worthy of his consideration.

With his next pick he made the only pick of the draft I disagreed with, taking an Infiltrator's Magemark over Train of Thought. My guess is that he felt he wouldn't be playing enough Blue sources to support the Train of Thought, and the Magemark works quite well with his Streetbreaker Wurms. He got another Silhana Starfletcher over nothing next, and then confused me again by taking Absolver Thrull over a second Infiltrator's Magemark. He finished out the pack with a Gruul Signet, and a Gruul Nodorog, the latter of which was very unlikely to make his deck.

Antonino was jollier than Santa Claus after looking at his deck after Guildpact, and was surely excited about the prospect of getting a lot of great Simic cards in Dissension considering how many green cards he had been passed in Ravnica. His first pick gave him the choice of Seal of Fire, Minister of Impediments, and Plaxcaster Frogling. All three cards could reasonably be taken here: the Seal of Fire because he had no removal, the Minister of Impediments because he had no way to deal with flyers, and Plaxcaster Frogling because he has a blue-green base, and the Frogling can really take over a game when it's played on turn three. He eventually decided on the Minister of Impediments, the same thing I, your humble reporter, would have taken.

He then took Utopia Sprawl out of a pack with very little for his deck. Things got back on track in the next pack with a Helium Squirter over Plaxmanta, Azorius Chancery, and Sporeback Troll. He was then faced with an interesting decision between Ocular Halo and Aquastrand Spider. The Halo doesn't really fit well in his deck, because he has very few creatures that he doesn't want to be attacking with, but on the other hand, he has very few sources of card advantage since he passed the Train of Thought and Wildsize in the last pack.

He took the spider here, wanting the consistent card for his deck, but seemed to regret the pick after the draft. Hindsight is 20/20. etc. He then had a pleasant surprise when he found Simic Guildmage in the next pack. The rest of the pack was quite disappointing since the only card that he could play that made a lap was Momir Vig, Simic Visionary.

After the draft, he seemed quite happy with his deck, and we agreed that there was no other direction he could have gone during the draft. I expect he will either 3-1 or 4-0 the pod, most likely 3-1. The only way for him to deal with flying creatures is to tap them with a single Minister of Impediments, or block them with his Silhana Starfletchers, while racing on the ground with his big men.

The draft appeared to put De Rosa back on track after his rocky start in Constructed, which really isn't surprising at all, to those who believe his claim of being North America's best Limited player.