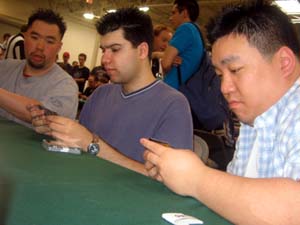 of these teams were at 24 points heading into the last round. As tiebreakers were not available, they were unsure if either or both of them were in contention for the top four. However, they just had to assume the best and play to win, hoping for good news about tiebreakers after the draft.

Truly Lazy Mean is a cross-Canada team with Gabriel Tsang from Toronto, David Rood from Montreal, and Terry Tsang from Vancouver. All have had success at the Pro Tour, with individual top eights for the Tsang "brothers" and a second place finish for Rood as a member of team 2020. Tim Aten is a popular writer for StarCityGames.com.

At this point :B had Tim Aten (A seat) in blue-black without anything remarkable besides Pentavus, John Pelack (B) in white without a certain second color, and Gadiel Szleifer (C) in green-red. Truly Lazy Men had Gabriel Tsang (A) in green-white, David Rood (B) in red-artifact (looking towards red-blue), and Terry Tsang in red-black. In the early-going, :B looked to have a slight edge, with John's deck probably being the strongest overall, and Gadiel also having an edge over his opponent in card quality.

For the second set of packs, the pick order reverses.

The cards continued to fall well for :B in the second set of packs. Gab pulled ahead of Tim in their matchup, but John continued to get very solid picks. Rood's Skeleton Shard and Archmage were quite good, but overall the advantage still looked to be solidly for Gadiel. Terry continued to accumulate expensive spells, with Clockwork Dragon and Pewter Golem. If Gadiel could draft some more speed, Terry would have a lot of trouble keeping up.

For the final set of packs, the order again reverses. 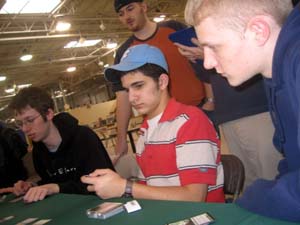 Truly Lazy Men seemed more more collected during the draft, generally agreeing on picks and acting confidently. :B were, in contrast, wild. They often appeared to disagree on card evaluations, and the directions their decks were going. Even when Tim was picking good cards he looked ready to throw up in disgust. In the end, though, I think :B came out slightly ahead. John's deck was probably the best at the table, and Terry's deck was so slow that his powerful effects might be too late in coming. He did pick up a couple of Echoing Decays in the last pack to help out with that issue, so the match looks fairly close. Tim looked to be at a slight disadvantage to Gab, although Gab's deck was by no means amazing. Overall it should be a close match, with the slight edge to :B.

As the draft ended, the judges showed up with the accurate standing information, and it turned out that these two teams had very poor tiebreakers, and would be unable to make the top four even with a win. In the end they decided to draw.