The room buzzed as China, one of the tournament's unexpected success stories, faced the home team. Hui Zhang, Hua Chao Song, and Zhou Long drifted in a sea of whispering Japanese reporters. In any sport, from judo to badminton, soccer to table tennis, Chinese and Japanese fans are passionate rivals. A win here would help solidify China's chances of reaching the finals. They faced off the solid team of Takuma Morofuji, Ichirou Shimura, and Masashi Oiso. 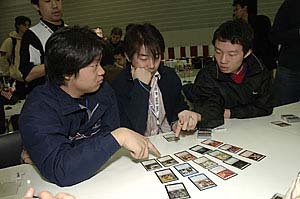 The Chinese team was a surprising fifth at the start of Saturday.

China won the die roll, and opted to have Japan open first. The two teams quickly gravitated to a mirror format. Long and Shimura kept taking green cards, though both were unwilling to bias themselves towards white or black. Zhang and Morofuji locked themselves into a Boros mirror match. Zhang's teammates kept pointing him towards bigger, more powerful creatures. He ended up with an Oathbound Giant and Veteran Armorers. Killing his creatures would be a daunting task for Morofuji. Masashi Oiso's first-pack pick was Induce Paranoia, showing his desire to sign up with House Dimir. The first couple of packs were dry for blue, and Masashi stole a few Golgari cards from Song.

The Chinese players were a flurry of pointing, shrugging, and gesturing. They didn't appear to have a lot of experience communicating. Long made a few questionable calls, and his teammates showed their disapproval. Japan's signaling was smooth. Oiso made many decisions, but often consulted Shimura when he was at odds. Shimura helped pick up the slack. Morofuji, sitting in the center, was content to follow his teammate's advice.

The visiting team knew that Oiso needed to be stopped, and Long jumped into blue. He grabbed multiples of Snapping Drake, Vedalken Dismisser, and Peel from Reality. This kept Oiso from having a ridiculous blue deck. Shimura kept teasing green/white, picking up Tolsimir Wolfblood, Centaur Safeguard, and Guardian of Vitu-Ghazi. He also snagged a mid-pack Woebringer Demon, which prompted Song to first-pick a Fists of Ironwood over Bramble Elemental in the following pack. 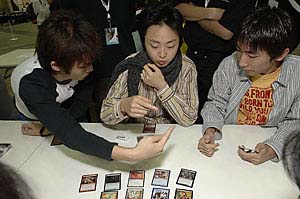 Picked as one of the favorites at the start of Worlds, Japan had some work to do to make it to Sunday.

After 18 packs, the Boros match looked like a coin flip. With creatures like Skyknight Legionnaire, Firemane Angel, Oathbound Giant, Veteran Armorer, and Conclave Equenaut, Zhang had the creature advantage. But his opponent Morofuji had superior removal spells. A Lightning Helix, two copies of Faith's Fetters and Galvanic Arc, coupled with a leaner assortment of bears and beaters, could spell victory.

Oiso and Long were set for the long game. Long's Saproling token generators and flyers would meet their match with Oiso's Stinkweed Imps. Masashi would have a hard time generating air offense, and while he could keep the fatties away with spot removal and counterspells, his decking cards were limited to Induce Paranoia and Lurking Informant. Oiso had his work cut out for him to defeat his opponent.

Song's deck had some amazing heavy hitters and recursive bombs like Moldervine Cloak, but he needed to make sure his early game came together. He had lots of mana acceleration, however. He felt confident that he'd win provided he gets a decent early game. Shimura had to win quickly or draw his key removal spells to pull out the match.