are Gabe Walls. You are young, brilliant, and one of the most popular players on the Pro Tour due to your jovial nature and lightning-fast wit. Scruffy is your middle name. In spite of the fact that you made $91,000 at the World Series of Poker last year, you chose to skip the main event this year and play in U.S. Nationals with your friends. The Japanese love you. You also managed to post a 3-0 in the first half of Constructed and are poised to make a run at another national team appearance.

To get in the right frame of mind for the draft, you walk up to Osyp Lebedowicz, who has just sat down at his draft pod and embarrass him by "bare assing" him, causing the Ukrainian to run screaming from his table, and later swear about the things he would do to avenge such em-bare-ass-ment. Having witnessed this first hand, I wish I could say I was joking. Anyway, this is what your pod looked like and how your Ravnica Block Draft unfolded. 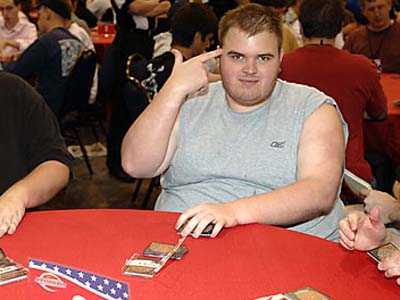 C'mon Gabe, it's not that bad…

You sit down at the table to find your roommate Gerry Thompson on your left, and Andrew Hayes feeding you on your right. Pack number one gives you Bramble Elemental, Conclave Equenaut, Stinkweed Imp, and Savra, Queen of the Golgari as options. You grab the boom boom, and ship the rest. This is convenient, because you get Selesnya Guildmage in the second pack over Sisters of the Stone Death, Bathe in Light, and Thundersong Trumpeter. Pack 3 delivers Boros Guildmage over Elves of the Deep Shadow, another Thundersong Trumpeter, and Screeching Griffin.

The fourth pack brings decision time. You already have a Bramble Elemental and a Selesnya Guildmage, and you see a pack with Selesnya Evangel, Gather Courage, and Cleansing Beam. Which card do you pick?

Gabe thought about it for a while, but put the Cleansing Beam in his pile, shipping the Evangel to someone else downstream. He finished out pack one with Fists of the Ironwood, Boros Signet, Thundersong Trumpeter, Sell-Sword Brute, and a very late Gather Courage over an even later Bathe in Light. At the end of pack 1, Gabe was green-red-white, Thompson was red-white-black with a splash of blue for his first-pick Ribbons of Night, and Hayes was red-black-blue.

The first pack of Guildpact was incredibly deep in Izzet. Gelectrode, Steamcore Weird, two Ogre Savant, and Izzet Chronarch were all present, as were a Wildsize and Blind Hunter. Gabe took the Gelectrode, and then nabbed Repeal followed by Electrolyze and Gruul Turf in his next two packs while Thompson snatched any Orzhov goodies and plunked them in his pile upstream.

The quality didn't stop there, however, as Walls drafted Living Inferno fifth, Pyromatics sixth, then Izzet Signet, Scorched Rusalka, and Izzet Chronarch seventh through ninth. This is what we in the business like to call "the hookup." Thompson had some decent cards in Guildpact, but nothing terribly special, and it was clear that someone to his left was gobbling up the best of the cards with black and white mana symbols.

Dissension's first pack gave Gabe the option of Azorius First Wing, Ocular Halo, Azorius Chancery, Ocular Halo, Trygon Predator, and Coiling Oracle. The Predator was an easy choice for Walls, but the second pack showed a Minister of Impediments and Sky Hussar, which Walls paused to consider. The Minister was the obvious choice, but Hussar can be nothing short of amazing if your deck is capable of abusing it. Gabe decided to stay on target here and draft the Minister, even though his deck was pretty flexible with its manabase because of earlier Signets.

Isperia the Inscrutable earned a wince from this reporter, but Walls didn't scrutinize the sphinx for a second, fearing that he'd be cutting roomie Thompson out of bombs if he hopped into Azorius now. Little did he know that Isperia would circle all the way back around to John Pelcak who opened her, and who then had to hate her away from the rest of the table.

Anyway, Gabe picked the very underrated Might of the Nephilim over Isperia followed by Simic Growth Chamber over Helium Squirter, backed up by Simic Signet and Azorius Chancery to make sure his mana base was solid. From there, he filled out the rest of his deck with Utopia Sprawl and another Might of the Nephilim plus a last-pick Prahv, Spires of Order.

During deck construction, Gabe mostly tried to figure out which of his excellent spells he wanted to cut and whether or not he was playing three or four Signets in his deck. He seemed very happy with his deck.