Nicolai Herzog is back. After playing just one event earlier in the season, he came Worlds looking to pick up enough points to rejoin the tour. With four Pro Tour Top 8s and two Grand Prix Top 8s to his name, Nicolai is one of the more successful players in the world, and his draft specialty puts him in excellent position Thursday as he left the first day of Constructed at a solid 5-1. 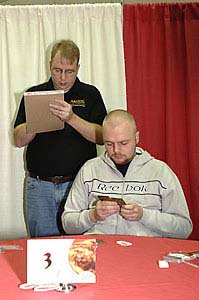 Nicolai Herzog was eager to flex his draft muscles.

After a near-miss for the 2004 Player of the Year honor, Nicolai decided to spend some time away from the game, but he says he quickly missed coming to the Pro Tour.

"I missed my friends," he said. "I missed traveling, I missed playing. I'm out of invites at this point, but I will be trying to rejoin the tour, and if I pick up enough points I'll be attending all of the events now."

Coming into the draft, Nicolai's main goal was to avoid Golgari.

"That combination [green-black] somehow is never good for me," he said. "It has good cards, but they never seem to come together, so I definitely wanted to avoid that one if at all possible."

His preferred combination is actually Selesnya's green-white, something many pros have echoed this week. "I like green-white most, sometimes with a very small splash. I'm willing to play red-white if I have to, but no matter how good those decks look on paper they never seem to work out. They key is to go all out and draft as quick and aggressive a deck as possible. You have to take the early drops very highly."

Nicolai also mentioned he was willing to draft the blue-black of Dimir if the cards pushed him that way, but he wasn't aiming for it as strongly because he doesn't feel as comfortable yet in that combination as he does in green-white.

This draft was a challenge right from the start for Nico. Here were the notable cards from his first pack:

That's it. Yes, there are some playable cards there, but it's not what you hope to open for your first draft at Worlds. Nicolai went back and forth on this one, looking mostly at the Phalanx, Transluminant, and Signet, and in the end the Signet won out. For his next pack the key cards were Last Gasp and Viashino Fangtail, with the removal spell winning out. Elves of Deep Shadow was the only choice in the pack after that. The next pick offered Fiery Conclusion, Skyknight Legionairre, and Guardian of Vitu-Ghazi, and Nico stayed on target with the green-white pick. From here the packs were very shallow, offering up Bramble Elemental, Farseek, Congregation at Dawn, and another Selesnya Signet. Coming out of the first set of packs, Herzog had some good mana fixing and acceleration, but very little to do with it and a distinct lack of heavy hitters.

Opening the second set of packs, it offered temptation in the form of the devastating Hex. Nico looked tempted by the rare, and thoughts of the Last Gasp he already had in his pile probably occurred as well, but this pack also had Selesnya Evangel, an on-color powerhouse that fit exactly one of things his deck was looking for. In the end Nicolai stuck by his guns and went with the guild pick.

His next choice pitted Seeds of Strength against Dive Bomber and Civic Wayfinder, and the flier was an easy choice for his threat-light deck. Transluminant came next (with only a Shambling Shell offering any other choice), followed by a welcomed Veteran Armorer in an otherwise shallow pack. Next came Seeds of Strength (over Gaze of the Gorgon), and then a very handy Root-Kin Ally over Guardian of Vitu-Ghazi No. 2. Next came a Crown of Convergence that would fit right into his deck, but the packs dried up from there.

For the third set of packs, only the first four picks offered much choice at all. His first pack in this set put Galvanic Arc against Mossdog and the Last Gasp that he ended up taking. Next came Evangel No. 2 over Watchwolf. Then came a questionable pick of Centaur Safeguard over Golgari Signet, followed by a questionable pick of Courier Hawk over another Golgari Signet. After that things were straightforward, with Elves of Deep Shadow, Carven Caryatid (over the amazing but very expensive Blazing Archon), Screeching Griffin, Bathe in Light, Votary of the Conclave, and then a Chorus of the Conclave. In the end, his deck came together like this.

1 Votary of the Conclave 2 Elves of Deep Shadow

1 Chorus of the Conclave 1 Crown of Convergence
40 Cards

When I spoke with him after the draft he was clearly disappointed that the packs hadn't been more impressive.

"It felt like I didn't get as many late cards, and that the packs on our side of the table at least felt pretty low power-wise," he said. "The first pick in particular just seemed awful. I mean, Signet first pick, that's terrible. I think it was right, but still, that's pretty bad." 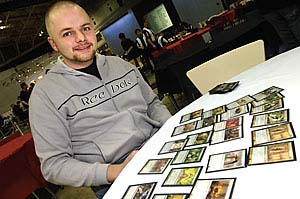 At this point Gabriel Nassif (the man who aced Nicolai out of Player of the Year last year) came by and asked what else had been in that pack. He said that he liked the Transluminant better there, since of all the guilds, Selesnya really doesn't want to be playing Signets, they want to be playing early creatures to set up convoke if all goes according to plan. Reigning World Champion Julien Nuijten said that he actually likes the Phalanx there, as it's been pretty good there. After some more discussion Nicolai felt both creatures made more sense than the Signet, but all three agreed that it was a disappointing pack however you picked from it.

After that, the other question was the Golgari Signets that he had passed up. He remembered passing one up for the Courier Hawk, which he regretted, but had forgotten about the one he passed on to take the Safeguard Centaur. When I asked him about it, he smiled. "The draft was going so badly that I was concentrating mostly on trying to make some kind of deck with what little tools I had. At one point I was still concerned that I my creature count was too low, and I think I lost track by the time the Signets came by, because I would much rather be running one Golgari Signet, and it turns out I had more creatures than I thought I had. Looking back, I should have taken one Golgari Signet over either of those creatures, then taken the other creature over Golgari Signet No. 2."

The question of rares came up briefly. Nicolai confirmed he had considered the Hex, but felt his deck was too weak to risk the pick and then potentially not be able to use it. He also was tempted by the Blazing Archon, but the casting cost was too high when he considered it against the Carven Caryatid, which he expected to be excellent in his deck.

When I asked what he suspected was being drafted around him, he shrugged with a grin.

"Normally I would try to know better, but this time the draft was so hard that I just had to focus all my attention on somehow putting a deck together. I really don't have any idea what the others were drafting. I have some guesses, but that's about it. All my concentration was on trying to put a deck together in such a difficult draft. It's funny how that happens sometimes, where you have to just put all your attention on the basics."

When asked how he felt about his chances, he said the main question was the power level of the rest of the decks. "I mean, I can win with this deck. It has a good curve and some good cards, but a lot will depend on how weak the other decks are. The packs around us seemed pretty shallow, even if I did have to pass some big cards like Arc and Hex."

He turned to Nassif, "I can win, right?"

"You're right, it's going to depend on the other decks you face," Nassif said.