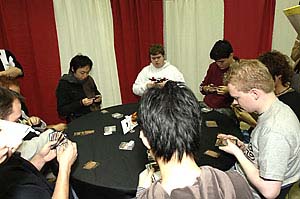 A formidable table came together to start the draft.

I settled in behind Frank Karsten and watched him tackle this formidable assemblage of drafters. He opened his first pack and showed a preference for the Boros Guild by quickly sorting his pack with only Skyknight Legionnaire and Conclave Equenaut getting shuffled to the top. He shook his head and debated between the two cards. If he took the Equenaut he would have more flexibility if the table pushed him into green-white but he did not want to invite Kaji to his left to go into the Boros Guild.

Karsten took the 2/2 hasty flier and seemed to regret it when he took a second-pick Scatter the Seeds. The only Boros card he could have taken was Boros Swiftblade - not a card he was prepared to second pick. There was also a Golgari Rotwurm in the pack but Karsten gave it only a passing glance as he went for the token generating spell. His next pick was Divebomber Griffin over Seeds of Strength.

Karsten had not seen any solid red-white cards since his first pick and was shocked when the fourth pack greeted him with Razia. He briefly considered taking a signet or even a Nightguard Patrol, but in the end the rare Kor Chant with wings was face down on his pile of picks. The next pack was truly unspectacular with only a Boros Signet and Spectral Searchlight to choose between - Karsten took the more efficient signet over the alternate win condition of the Searchlight.

Karsten slammed down his sixth-pick Selesnya Evangel. The token generator is considered one of the very best commons in the whole set by most of the pros, and to have it travel past more than half the top table before getting to Frank seemed very surprising. Frank's position at the table meant he would be in a great position for green-white. Both Mori and Romao to his right were squabbling over blue and black. To Frank's left, Kaji was more than happy to snap up all the Golgari cards Frank could ship him. Antoine was firmly in Boros colors one seat further to his left.

Frank took his second Evangel first-pick in the second pack. To his left Kaji was grappling with an insane pack that had Last Gasp, Keening Banshee, Primordial Sage, and Galvanic Arc. Kaji took the Sage and Frank took the Arc, leaving plenty of goods for both Mori and Romao.

The second set of packs seemed pretty consistent for Karsten with some decent picks like Transluminant, Seeds of Strength, Screeching Griffin, and Gather Courage before he was shipped a seventh-pick Galvanic Arc. 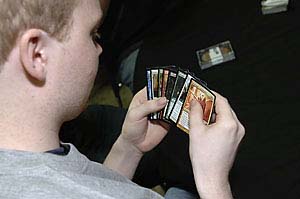 The pack Karsten opened for the third round of picks was spectacular. Just among cards he could play in his green-white-red deck were Tolsimir Wolfblood, Lightning Helix, Selesnya Evangel, Galvanic Arc, Faith's Fetters, and a totally outclassed Gather Courage. Frank briefly considered each of them before finally settling on the legendary crusade to accompany his two Evangels.

Frank opted for a Conclave Equenaut for his deck over Scatter the Seeds with his second pick but there was another awaiting him in the third. It was alongside Viashino Fangtail, Veteran Armorer, and Flash Conscription - Antoine would have his choice of all the Boros toys. Frank rounded out the pack with a Civic Wayfinder, Root-Kin Ally, and a SIXTH-pick Selesnya Evangel - his third. There were some bounce lands and a late Gather Courage still coming his way, but his deck was all but done.

During deck construction Frank marveled at the cards he had drafted although he was puzzled by the late picks he had nabbed that were pulling his deck in the direction of three colors.

"Three Selesnya Evangels are just insane in green-white," he commented. "I also got a seventh- or eighth-pick Galvanic Arc. It didn't seem like red was very under drafted up until that point so such a late pick Galvanic Arc was really strange."

"I was hoping to get either Boros or Dimir," explained Frank when asked about his preferences coming to the draft table. "That is why I first-picked the Legionnaire over the Equenaut. I think Boros is better than Selesnya overall. The first pick was kind of hard because if you take the Equenaut you can go in both directions. I just feel that Legionnaire is so much of a better card. That's why I picked it and I will probably end up splashing it. I am probably going to be straight green-white with a small red splash for the Galvanic Arcs - and maybe the Razia. I just need to see how it will work out exactly." 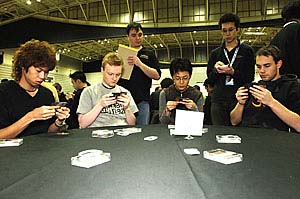 Karsten and Ruel both went into Boros.

Frank was still not sure what the other players at the table were drafting. Kaji passing him Last Gasp and Keening Banshee in favor of Primordial Sage seemed to have thrown off Frank's assumptions. "I think Mori to my right was drafting blue-black. To my left I thought Kaji was drafting green-black based on the cards I was passing him but I am not sure."

Antoine Ruel was solidly red-white although Frank did not think anyone near him was red based on his late-pick Galvanic Arcs - there were actually six at the table, although he could not know that at the time.

"My first picks were Flame-Kin Zealot, Faith's Fetters, and Viashino Fangtail," smiled Antoine as he showed off a dangerous-looking Boros build. "My two Lightning Helixes were fifth and fourth picks. The best four cards I saw in the draft were all in the same two packs." Each time Antoine picked a Helix, he had to pass Galvanic Arc.

The most interesting thing about the way the table shook out was that starting with Rasmus Sibast through Carlos Romao and ending with Katsuhiro Mori, there were three blue-black drafters in a row. Mori was on the wrong end of that chain for two of the three packs. Each of the three players ended up with two Vedalken Dismissers but zero Vedalken Entrancers.

Presented below are all eight draft decks from the table in the order they were seated. Frank was passing left to Antoine Ruel to start, and so on.

2 Seeds of Strength 1 Gaze of the Gorgon

2 Drift of Phantasms 1 Consult the Necrosages

1 Wizened Snitches 1 Clutch of the Undercity