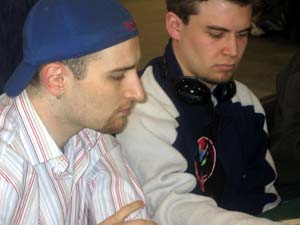 Re-Elect Gore, comprised of Jon Finkel, Brian Kibler, and Eric Froelich was paired up this round against the Canadian team of Jon Stern, Steve Wolfman, and Nicholas Leary - Aquamoebas Anonymous. The members of Re-Elect Gore are well-know veterans of the Pro Tour, with several top finishes for each member. The Aquamoebas Anonymous have some successes under their belts as well - Wolfman was a member of 2020, which finished second to Phoenix Foundation in Boston 2002, and Jon Stern played for Team Canada at last year's worlds.

Re-Elect Gore won the coin flip and elected to have their opponents kick-off. The opening pack was ideal for the Aquamoebas, as it contained two very strong cards, Viridian Shaman and Icy Manipulator, and a bunch of mediocre spells for the other team. Wolfman took the Shaman, setting himself up for green in the middle, and Nichlolas took the Icy Manipulator. Finkel grabbed Hematite Golem, Kibler took Krark-Clan Grunt, and Erik received Auriok Transfixer. Jon Stern wheeled Nim Shrieker and Yotian Soldier, putting himself in black against Re-Elect Gore's red deck.

Finkel opened the second Spikeshot Goblin of the draft, which he immediately took. Kibler made a move towards blue with the imposing Broodstar, and Eric took Blinding Beam, putting him in white according to their original draft plan. There was a pile of white cards left for the Aquamoebas; Nicholas wheeled Skyhunter Cub and Leonin-Den Guard, Steve killed Taj-Nar Swordsmith along with a Hematite Golem for himself, and Stern got AEther Spellbomb and Nim Lasher.

Brian opened everyone's favorite bomb, Grab the Reins, along with Terror, Bosh, and Arrest. Kibler took the Terror, sending Grab to Eric. Bosh went to Stern, a pick he would later regret as he didn't end up playing the expensive artifact creature, an Arrest went to Nicholas. The rest of the picks were lackluster, with the most notable being Steve's Wizard Replica, which he would use to combat the anticipated wave of flyers coming from Kibler's blue-black deck.

Four packs in, Re-Elect Gore had Finkel (A) in green-red, Kibler (B) in blue-black, and and Eric (C) in white-red. Aquamoebas had Stern (A) in black, with black or blue as possible supporting colors, Wolfman (B) in green-red, and Nicholas (C) in white-red. From this point on the players stuck to their colors and settled in to concentrating on individual picks for their matchups.

Pack five brought the third Spikeshot Goblin to the field, which fit nicely into Eric's deck. Three Spikeshot Goblins opened, three Spikeshot Goblins taken first - perfect. In a continuing trend, Jon's pick was unexciting - AEther Spellbomb. Steve took Lightning Greaves and Nicholas took his third equipment-required creature, Skyhunter Cub. As he did not yet have any equipment, Nicholas would probably be looking for it now as a top priority.

Stern finally got a strong card for his deck, opening Somber Hoverguard. There was a Shatter for Wolfman and Fireshreiker for Nicholas. Finkel took Trolls of Tel-Jilad, and Kibler got the powerful but fantastically expensive Reiver Demon, as there was nothing exciting left in the pack.

A third of the way through the draft, Stern again opened, this time going in the opposite direction. He was rewarded for his patience with Crystal Shard, probably the best card a blue deck can hope for in Mirrodin. Eric got the mediocre Soldier Repica for his deck, while Kibler received a welcome Myr Enforcer for his affinity-themed deck, and Finkel got Tel-Jilad Archers - a great card in the red-green on blue-black matchup.

Leonin Skyhunter fit well into Eric's deck for his first pick of pack eight. Kibler followed with Thoughtcast, Finkel picked up Fangren Hunter, Nichlolas took a opportune Scimitar and a Leonin Den-Guard, Wolfman took Slith Firewalker and Vulshok Berserker, and Stern got Rustpore Ram and Disciple of the Vault.

Brian opened a great pack for his team next, with Mask of Memory for himself and Triskelion for Finkel. It wasn't perfect, however, as Wolfman got Shrapnel Blast and Nicholas got another Scimitar, but you can't have everything, right?

Finkel follow-ed up by opening Loxodon Warhammer for himself. It wasn't a perfect fit for his green-red, but he wasn't complaining either. Nicholas got yet another Skyhunter Cub, Wolfman got a Grunt, and Stern got Neurok Spy to finish off the playables.

Nicholas answered Eric's open with a Leonin Skyhunter of his own next pack. Deconstruct was left for Wolfman, and Irradiate for Stern, which he had to be very happy to see at this point. Eric took Raise the Alarm and killed Steel Wall from Stern, while Brian got a myr and artifact land and Finkel got a much-needed Gold Myr.

For the final Mirrodin pack, Wolfman completed the circle he started at the beginning of the draft by opening another Viridian Shaman. Stern took Myr Enforcer, Brian got a myr, and Finkel got his second Tel-Jilad Archers, making his matchup look even better against Stern's so far unexciting blue-black.

Wolfman started off Darksteel with a bang, drafting Fireball and passing the superb Leonin Battlemage to his teammate Nicholas. This left Tangle Golem for Finkel, Quicksilver Behemoth for Kibler, Loxodon Mystic, and Arcbound Stinger and Dross Golem for Stern.

Nicholas opened Barbed Lightning for himself, and Finkel killed an Echoing Decay leaving Brian Hoverguard Observer (probably a mistake in the end - Kibler would have been happier with the Decay in his black-heavy deck).

Brian opened well again for the sixteenth pack, getting himself Murderous Spoils and Skullclamp for Eric. Stern picked up an Echoing Decay, Steve Grabbed a Tangle Golem, Nicholas got Barbed Lightning, and Finkel wheeled Ageless Entity and Echoing Courage.

The second to last pack was perhaps the most exciting of the draft. Eric opened, only able to take one card for himself before the Aquamoebas would get three picks in a row. The pack contained Barbed Lightning, Death Cloud, Quicksilver Behemoth, Vulshok Morningstar, Razor Golem, and Nim Abomination. Re-Elect Gore were clearly concerned about the Cloud, but it was useless for Eric, so he had to take the Barbed Lightning. Much to their surprise though, Stern took the Quicksilver Behemoth, Steve took Morningstar, and Nicholas took Razor Golem, leaving Brian to wheel the Death Cloud and Behmoth. When the Cloud finally cleared Nicholas, Finkel, Kibler, and Froelich were literally jumping out of their seats. Wolfman later explained that he just didn't see the Cloud and Stern didn't know what it did, not having played much with Darksteel. 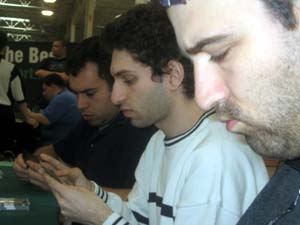 It was clear in the draft that Re-Elect Gore were much more comfortable and experienced than their opponents. They had few disagreements on cards and communicated well. The Aquamoebas were less organized, and seemed to disagree on card evaluations fairly frequently. While Re-Elect Gore seemed to know where everyone was in their matchups and truly drafted as a team, the Canadians seemed somewhat fractured and unsure of themselves. While I believe the c-seat matchup will be close - a red-white mirror where Nicholas has a number of solid cards - Finkel should smash Stern with very little trouble, and Kibler's card quality should overcome his matchup disadvantage.