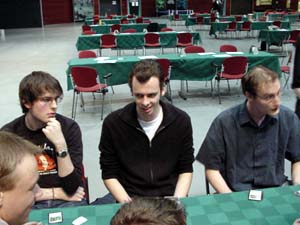 of these teams were undefeated going into the round, the dutch team being 8-0, and the germans having only a draw to detract from their record. The german team consists of Dirk Hein, fresh off a GP Madrid Top 4, GP Genova winner Reinhard Blech and former European champion David Brucker. On the Dutch team are the two lesser-known Cornelissen brothers Stijn and Jesse, and former World champion Tom van de Logt.

The germans won the die roll and chose to kick off. Blech, the B player, opened a pretty poor booster with the best cards being Pyrite Spellbomb, Slith Firewalker, and Leaden Myr. After some discussion, he took the spellbomb, leaving the myr for Hein. Stijn, the A player on the Dutch team, took Stalking Stones, van de Logt Goblin Dirigible, leaving Nim Shrieker for Jesse. The dutch seemed to be employing the intuitive strategy of putting black in C, since the black cards are so strong in Darksteel.

The germans had another strategy though. Opening a booster containing Altar's Light, Pewter Golem and Skeleton Shard as the best cards, Hein chose the Altar's Light, obviously preferring white in the C seat. Stijn picked up the Pewter Golem, possibly a hate draft, leaving the more powerful Skeleton Shard for Jesse in the A seat, and van de Logt going into white in the middle seat with Soldier Replica. On the rebound, Brucker got a Vulshok Berserker and Rustspore Ram, Blech picking a Vulshok Gauntlets and Disciple Of The Vault.

Stijn opened a powerful booster, containing Looming Hoverguard, Nim Shrieker, Lodestone Myr, Deconstruct and Skyhunter Cub. The Dutch debated for a long time over their pick here, with lots of shaking of heads and frantic arm gestures. Finally, Stijn chose the Deconstruct, with van de Logt taking the Cub. Jesse chose the Lodestone Myr, probably the best card in the pack, leaving the very powerful Looming Hoverguard for Brucker. Blech picked up a Talisman Of Progress and Nim Shrieker, and Hein took a Wurmskin Forger and Viridian Joiner. Brucker got an Aether Spellbomb as well.

Van de Logt's first booster was powerful as well, giving him a Blinding Beam and Jesse a Pewter Golem. Brucker took a Quicksilver Elemental, Blech a Lightning Greaves, and Hein a Fangren Hunter. At this point, Stijn wheeled a Disciple Of The Vault and Frogmite, probably both hate drafts, but leaving Roar Of The Kha for Hein.

Jesse's Mirrodin booster was a weak one, netting him a Neurok Spy. Brucker picked up an Aether Spellbomb, Blech a Talisman Of Progress, and Hein a Skyhunter Cub. Stijn had to hate draft another Disciple Of The Vault.

The last Mirrodin booster gave Brucker a Neurok Spy, Blech a Creeping Mold (probably a hate draft), and Hein a Skyhunter Patrol. Van de Logt got a Leonin Den Guard, but the booster was otherwise unremarkable.

The Germans seemed happy with the first booster, with Brucker and Hein's decks shaping up nicely as R/U and G/W respectively. Blech got few good picks, but seems to be building some sort of affinity deck, probably B/R. The Dutch were not as happy. Stijn had a green deck with few good picks, van de Logt had a good white deck, and Jesse's affinity deck seemed to shaping up decently.

Brucker kicked of the second round of Mirrodin boosters, opening Lodestone Myr and taking it without too much deliberation. As Craig Jones was still halfway in bed, there was no notes of the Dutch picks here, but they probably weren't too good…

The second booster saw Jesse pick up a Domineer, but he wasn't too happy with it, as Hein had few good artifact creatures at this point. However, Darksteel usually remedies that fact, so it probably wouldn't be a total waste. Tom got a Skyhunter Patrol, Stijn a Bonesplitter, leaving Predator's Strike and Wurmskin Forger for Hein, Slith Bloodletter and Moriok Scavenger for Blech, and Great Furnace and Neurok Familiar for Brucker. Possibly, the Bloodletter would have been a better pick for Jesse here, as it's awesome against Hein's possibly clunky G/W deck.

Tom's second Mirrodin booster gave him a bomb in Spikeshot Goblin, fitting perfectly into his R/W equipment build. Stijn got a Tel-Jilad Chosen. The germans' only card of note from the booster was David's Granite Shard, leaving a Thoughtcast for Jesse's affinity deck.

Stijn's booster contained the swingy Soul Foundry, which he took over Tel-Jilad Archers, probably a mistake considering his opponent was red, allowing him to deal with the foundry easily, whereas the archers could really be a pain. This left the archers for Hein, a green Myr for Blech, and a Goblin Replica for David, the perfect foil for the just-picked foundry. Van de Logt got a Lightning Greaves and hate-drafted the expensive Trolls Of Tel-Jilad. Brucker got an Annul on the wheel, probably a mistake on the Dutch team's part.

Hein's booster contained the amazing Viridian Shaman, leaving Reiver Demon for Reinhard. Blech's deck was a bit disappointing at this point, and he was happy to get the expensive bomb, allowing him a win condition against van de Logt's powerful white deck. Brucker took a Vulshok Berserker. The Dutch got a heap of good cards from the booster, with Jesse getting Irradiate and Consume Spirit, van de Logt an Auriok Transfixer and Raise The Alarm, and Stijn getting Tel-Jilad Chosen and Slith Predator.

The final Mirrodin booster contained Vedalken Archmage, Bonesplitter, Skyhunter Patrol, Rustspore Ram and Predator's Strike. Blech chose Bonesplitter after some debate over it's value compared to the Ram. Brucker picked up the powerful card-drawer. Stijn took a R/G Talisman, and van de Logt surprisingly chose the Ram over the Patrol. Stijn took a Predator's Strike, leaving the Patrol for Hein, who was obviously ecstatic about the pick. This seemed like another mistake of the Dutch - first of all, at this point, Blech's deck was pretty much a bye for van de Logt, and they should have focused their efforts on improving the other players matchups. Giving the Patrol to Hein didn't help this. Second, the Patrol is probably the better card anyway. Third, the Rustspore Ram wouldn't be useful to Hein, as Jesse didn't have that much in the way of equipment.

The second round of boosters didn't really change the color configurations at all, but gave very little to Blech, who needed some good beats in Darksteel to pick up a deck. Van De Logt's deck was good as well, so that matchup seemed pretty lopsided. Equally lopsided was Brucker's R/U matchup against Stijn's severely lacking green deck. Hein's G/W deck seemed very good as well, whereas Jesse's affinity build didn't really get the cards it needed and seemed to be a bit unfocused.

Blech kicked off the Darksteel round of boosters with an Echoing Ruin. Dirk got the amazing Stir The Pride, leaving the Dutch with an Arcbound Bruiser for Jesse and some other cards Craig couldn't see through his half-closed eyelids... Brucker hated a Grimclaw Bats and took an Echoing Truth.

Dirk's booster contained the easy pick of Razor Golem, giving an Arcbound Reclaimer to Stijn, an Echoing Ruin to Tom, and an Arcbound Stinger to Jesse. This left Neurok Prodigy for Brucker and Dismantle for Blech.. Brucker also hated a Loxodon Mystic. Jesse seems to want to pick up some arcbound guys to go with his Skeleton Shard.

The third Darksteel booster had seemingly forgotten that it was supposed to have bad green cards, as Rebuking Ceremony, Tangle Golem, Stand TogetherEchoing Courage and Tangle Spider were all opened. Stijn chose the new-age Plow Under, giving Tom a Loxodon Mystic and Jesse a Quicksilver Behemoth for his affinity deck. Brucker took a Darksteel Citadel, Blech a Screams From Within, leaving the apparent powerful pick of Stand Together/Tangle Golem, but he chose to pass on the pumper, taking a Darksteel Ingot instead. It seems like he thought that he needed the acceleration, but it sure seems like mistake to me, as he already had a myr and joiner. The Stand and Spider were hated on the germans' last picks, leaving the Courage for Stijn.

Tom's Darksteel booster had Leonin Battlemage, with Jesse taking a much-needed artifact land in Darksteel Citadel. This left Echoing Ruin for Brucker, Grimclaw Bats for Reinhard, and Tel-Jilad Outrider for Hein. Stijn wheeled a Drill-Skimmer and Loxodon Mystic. The mystic, although more powerful than the outrider was passed by Hein to avoid giving any picks to Stijn, who had to hate-draft instead.

The fifth Darksteel booster had a Vulshok Morningstar for Jesse, who was deliberating taking Screams From Within instead. This left Barbed Lightning for Brucker, Leonin Bola for Blech and Arcbound Slith for Hein. A Tangle Spider and Screams From Within went into Stijn's deck. 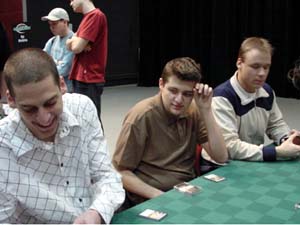 The final booster had a very interesting pick for Hein as Razor Golem, Tangle Golem and Test Of Faith were all opened by Brucker. Brucker took a Quicksilver Behemoth, Reinhard a Leonin Bola. Hein was adamant about taking Razor Golem over the powerful instant, and the others agreed. This left Tangle Golem for Stijn, and Chittering Rats for Jesse. Van de Logt was happy to get the Test Of Faith.

The german's were very happy with their draft, although Blech's deck was terrible. He must have been hoping to get the black payoff in Darksteel, but the boosters just didn't comply. The white and green was surprisingly good. It was predicted that Van De Logt would win, and the other two dutch players would get rolled over, and this was pretty much the final result as well, leaving the germans as the only undefeated team.