Draft Report: Setting Up the Christmas Season for Willy Edel

fresh off a finals appearance at Pro Tour-Kobe,Willy Edel from Brazil has already proven his prowess in Time Spiral draft. And here in Paris, the Brazilian pro is on a roll as one of five who finished the Standard portion with a clean 6-0 record.

Another 6-0 player, and another big name, sat to Edel's right in the first draft: Tsuyoshi Fujita. On Edel's other side, he was feeding Shouhei Yamamoto, another Japanese player with a 5-1 record in Standard.

The draft Edel did was an exercise in giving and receiving signals. Edel kicked things off with a Greater Gargadon and a Viscerid Deepwalker, looking to be in his favorite color combination, blue-red. He gave up Lightning Angel and Amrou Scout for his first-pick Gargadon, led solely by his color preference. Subterranean Shambler made his pick three, but when pick four of pack one arrived, Edel was reading white as open. No blue card, no red card, but Soltari Priest was in there and not much else. 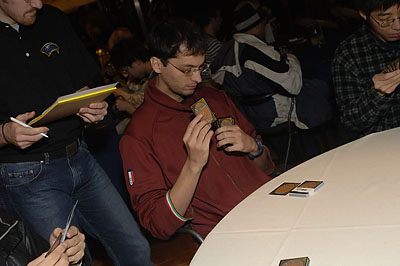 The Brazilian pro jumped on the opportunity. He knew he had shipped an Amrou Scout to Yamamoto, likely putting him or the next player down the line into white, but also banking on Fujita not taking white. His plan was to keep taking white and red in the rest of pack one, concentrate on red as his second color in pack two (because Yamamoto would pick off the good white cards), and hope for Fujita's white cards in pack three. The blue option was not there because Edel had not seen a single even remotely playable blue card.

At first, the plan went sour because the cards dried up. Edel received one Amrou Seekers, which he happily took, but his final ten picks (6 to 15) contained nothing red or white except for a Coal Stoker and an Orcish Cannonade. He got two Chromatic Stars, though...

I got a look at Yamamoto's pile between packs, and he was mostly green with white and red as possible second colors. Yamamoto could go either red or white as secondary color, so Willy was in a fine position to get some goodies in either one of his colors. When Edel flicked through his second fifteen, a Griffin Guide grinned back at him. No doubt, no hesitation, the Guide went into his pile! A second pick Rift Bolt confirmed that Yamamoto either had picked a better red card or was letting red through.

The third pick gave Edel another white card in Weathered Bodyguards, and he passed Tendrils of Corruption to Fujita. The Japanese player agonized over Tendrils or Bonesplitter Sliver, but in the end decided on the powerful removal spell. Grapeshot, Goblin Skycutter and a ninth pick Conflagrate were notable for Edel out of the second pack, while Fujita received a nice and welcome gift with a sixth pick Sengir Autocrat.

There wasn't nearly as much red as Edel might have wanted, and no white beyond that first-picked Griffin Guide. The reason: This draft played out in four colors only. Before pack three, I walked around the table to get a glimpse of every player's pile, and seven of eight had some blue cards in their packs. All except for Tsuyoshi Fujita appeared to have shotgunned the blue, so the depth of the color was spread out wide.

But Edel was set up nicely for pack three. White flowed from Fujita, as evidenced by the third pick with Errant Doomsayers and Weathered Bodyguards still in there and a couple of Watcher Slivers going past him. Also, with Fujita in black-red, Edel could expect some black cards to trump the red and get the leftovers from Fujtia.

A pick one Amrou Scout over Orcish Cannonade and another Scout next pick certainly made his deck, and in pick three Edel's strategy paid off big time: Tsuyoshi Fujita passed him a Griffin Guide that Fujita had no use for. While Edel had to ship Call of the Herd to Yamamoto, this was certainly no problem. And Yamamoto was happy to pick up that Call!

The Christmas season continued for Edel with a fourth pick Pentarch Paladin (passing Thrill of the Hunt to Yamamoto). Orgg, Grapeshot, Blazing Blade Askari and a late Orcish Cannonade made up the rest of Edel's draft. "I am not very happy," Edel commented afterwards, positioning his deck as mediocre and in the 2-1 range.