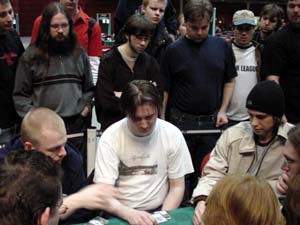 two are among the most experienced teams at the tournament. Recent PT Amsterdam winner Nicolai Herzog has teamed with fellow PT Amsterdam Top 8er Anton Jonsson and Pro Tour mainstay Tuomo Nieminen. On the other side of the table is PT New Orleans Top 8 player Hans Joachim Hoeh, world champion Daniel Zink and Daniel Mueller.

The Nordic team kicked off the draft with a pretty strong booster, Anton picking Viridian Longbow, and Tuomo getting a Spikeshot Goblin. Hoeh chose Chosen, showing a preference for green in the A seat. Zink got a Pewter Golem, and Mueller got a Granite Shard. Nicolai got a great wheel in Thirst For Knowledge and Consume Spirit, moving directly into heavy black.

The second booster was a near-duplicate of the first one, with Tuomo picking another Spikeshot Goblin, Hoeh choosen another Chosen, Zink getting another Pewter Golem, and Mueller choosing a Vulshok Gauntlets, leaving another great wheel for Nico, with another Consume Spirit and Serum Tank. Anton went into blue with the powerful Nuisance Engine/Lumengrid Sentinel combo. It seemed weird to take the gauntlets over Serum Tank, but obviously the Germans value it highly in white.

Hoeh's booster marked the start of a powerful run of uncommons in Mirrodin. He chose Grab the Reins as his first pick, leaving Myr Incubator for Zink and Electrostatic Bolt for Mueller. Nicolai picked up a Goblin Replica and Annul, Anton got the Leonin Den Guard/Fireshrieker team, and Tuomo got a Wizard Replica and Hematite Golem. Nico admitted later that the Goblin Replica should probably have gone to Tuomo, and he should have taken the Wizard Replica instead.

The fourth Mirrodin booster gave Zink only a black/blue talisman as his first pick, Mueller getting a Leonin Skyhunter. Nicolai picked up his first of three Disciples of the Vault, Anton got a Skyhunter Cub, and Tuomo picked Fangren Hunter. Hoeh wheeled Krark-Clan Grant and Leonin Scimitar.

Mueller opened the always-difficult pick of Arrest vs. Blinding Beam. At this point, Zink and Hoeh had a heated argument over the pick, but Zink managed to convince Hoeh that Arrest could be decent against Tuomo's double Spikeshot team.

Nicolai took a Pewter Golem as his first pick, with Anton picking up a Soul Foundry and Tuomo getting the second Grab the Reins of the draft. Hoeh got a Wurmskin Forger and Goblin Dirigible, Zink took an Irradiate and a talisman, and Mueller had to settle for a Soldier Replica and Razor Barrier.

After the first booster the Burkas seemed to have the advantage, with all three players' decks shaping up nicely. Nicolai seems to be B/U or B/R, Anton is W/U, and Tuomo G/R. Of the Germans, Hoeh seemed to get the shorter end of the stick, with not many good green picks so far, but Zink and Mueller both have a good starting point for their B/U and W/R decks.

Mueller's second booster had a Spikeshot Goblin waiting for him, perfect for his W/R equipment deck. Zink got a Nim Shrieker, looking good in his affinity build. Hoeh took a Talisman, leaving a Scythe of the Wretched for Tuomo, who was ecstatic about the pick, making a good combo with his Spikeshot Goblins. Anton picked up some more filler for his deck with Soldier Replica and Vulshok Gauntlets. Nicolai got a Relic Bane and Thoughtcast.

Zink opened another powerful booster, with the third Grab the Reins of the draft rearing its ugly head. He chose Bolt over it, leaving the powerful uncommon for Hoeh. Tuomo took a Goblin Replica, and Anton got another equipment-creature in Leonin Den-Guard. Nicolai took a Wizard Replica, probably thinking about the two Grabs in his opponent's deck. Mueller hated Seat of the Synod and took a Gilded Lotus for his Twiddle-Mind's Desire deck. This allowed Nicolai to get a Nim Lasher and Anton to get an Annul to counter Zink's Bosh.

Hoeh continued the trend of powerful uncommons with a Crystal Shard staring back at him. It was by far the best card in the pack, so he had to take it whether he would play it or not. Tuomo got a Vulshok Berserker and Anton a Thirst for Knowledge. Nicolai got another Pewter Golem and a Disciple of the Vault. Mueller got another Soldier Replica, and Zink got a Nim Lasher.

The fifth Mirrodin booster was interesting, as it contained Barter in Blood and Terror, but no picks for Tuomo. He was left to hate-drafting or splashing, but in the end he chose to hate-draft the Barter in Blood. Anton got an Arrest, and Nico took the Terror. On the wheel, Mueller got a Den-Guard and Gold Myr, Zink took a Leaden Myr, and Hoeh got Cathodian and Goblin War Wagon. This left Loxodon Punisher for Anton. Although Punisher might not be the best card in the world, it seemed like a gift in his equipment-heavy deck.

The final Mirrodin Booster was unexciting, giving Anton a Blinding Beam, Nicolai a Neurok Spy, and Zink getting a Shambler.

After the second round of boosters, it seems that the Nordic players got an even larger advantage, with all three decks looking really solid. The Germans were unlucky with the boosters, but made a few mistakes as well.

Anton opened the first Darksteel booster, a strong pack containing black and white Emissaries, Razor and Tangle golems, Quicksilver Behemoth, Chittering Rats and Leonin Bola. Nicolai and Anton got into a heated argument over the right pick, Anton wanting the Razor Golem and Nicolai urging him to take the flier, probably expecting Zink's ground defenses to be sufficient to hold the Razor Golem at bay. In the end though, Anton followed his first instinct and took the Golem. Tuomo got the Tangle Golem, Hoeh the Arcbound Hybrid, and Zink the Behemoth, and Mueller the Leonin Bola. Nicolai again got an amazing wheel, with Emissary of Despair and the rats.

The next booster was powerful as well, with Tuomo taking Rebuking Ceremony as his first pick. Hoeh took another Arcbound Hybrid (over Karstoderm), and Zink took an Essence Drain. Mueller took another Leonin Bola over Razor Golem. Nicolai took a Neurok Prodigy, and Anton almost jumped out of his seat getting his second Razor Golem. He also took an Auriok Glaivemaster and Nicolai got a Talon of Pain.

Hoeh's booster was also loaded with good cards, giving the Burkas an advantage, as they would wheel six cards from the booster. The Germans had to settle for a Tangle Golem, Chittering Rats, and Razor Golem, respectively, while Nicolai wheeled Quicksilver Behemoth and Neurok Transmuter, Anton got Specter's Shroud and Leonin Bola, and Tuomo Ageless Entity and Thunderstaff. Anton was very happy to get the good equipment to go with his many equipment-needing creatures.

Zink opened another Quicksilver Behemoth, giving Mueller a Barbed Lightning. Nicolai took a Vulshok Morningstar, giving Anton an Emissary of Hope. Tuomo got little out of the booster, and Hoeh got another arcbound creature for his deck, this time an Arcbound Slith. He also hated a Pulse of the Fields. This gave Anton his third (!) Razor Golem.

Mueller's final booster gave him an Echoing Ruin. Nicolai took Greater Harvester, which looks pretty good in his almost mono-black deck. Anton hated an Essence Drain, and Tuomo took an Oxidize. Hoeh continued with his arcbound plan, getting a slith and a bruiser. Zink got a good black wheel with Dross Golem and Grimclaw Bats. 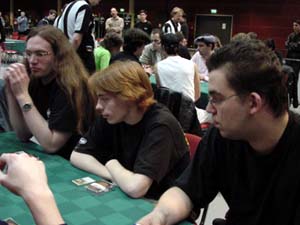 The final booster was powerful as well, with Nico opening and taking Chittering Rats. Anton chose Leonin Bola over Hoverguard Observer, and Tuomo took Barbed Lightning. Hoeh got the clunky team of Tangle Spider and Roaring Slagwurm, while Zink got the Observer and an Oxidda Golem. Mueller took a Talon of Pain and Krark-Clan Stoker.

The Burkas looked to be in great shape after the draft, with all three decks being amazingly powerful. However, the Germans got a fair share of bombs as well, so even though the odds are stacked against them, they might pull through. Anton's deck ended up mono-white with the three Razor Golems and lots of good equipment, along with double Blinding Beam to finish Zink off. Zink has an affinity deck that didn't quite pan out and doesn't really have the tools to keep up with Anton's beatdown machine. Nicolai seemingly got 2 great cards out of every pack, while Hoeh's deck is pretty clunky and slow, although he does have two Grab the Reins. The closest matchup will probably be Tuomo Nieminen vs. Andre Mueller, as both players have decent, but not amazing decks. However, Tuomo's double Spikeshot Goblin may prove to be a problem to Mueller's deck, as he doesn't have too much removal. In the end, the Nordic players won all three matches, and are probably a lock for the Top 4.