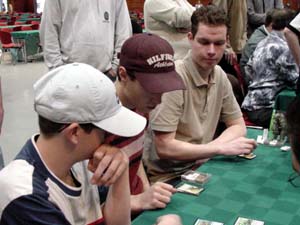 2 teams were both at 22 points, in a good position to make it to the top 4. Team $MIR is formed of Andre Muller, Hans Joachim Hoh (aka HaJo), and current World Champion Daniel Zink. Team C 1000 is formed of Sven Martineau (aka MiniSven, since he is rather young and tiny), Bas Knapen, and Tim Claessen: three pretty much unknown players from the Netherlands, but they all are fine players with the occasional PT qualification under their belt. While Team $MIR already has enough pro points between them to be qualified for the team pro tour, Team C 1000 is still hungering for that invite.

Team C 1000 won the coin toss, and they decided to kick off.

Tim opened the first booster and took Pewter Golem for himself. The broken Arc Slogger was shipped to Bas, and $MIR put Tel-Jihad Chosen, the red/black Talisman, and Blinding Beam in their A, B and C seat respectively. Sven had a wheel of Frogmite and Elf Replica. Andre picked Ogre Leadfoot and Daniel Consume Sprit before the picks dried out.

The second booster offered a Terror for Bas, Deconstruct for HaJo, Skeletal Shard for Daniel, and the white Myr for Andre. Sven took 2 artifact lands (Vault of Whispers and Seat of the Synod) and Tim got Leaden Myr and Copperhoof Vorrac.

Booster 3 gave HaJo a Fangren Hunter, Daniel a Pewter Golem and Andre a Leonin Den-Guard. Now Team C 1000 had to divide 6 cards between their team members. Sven (seat A) got Goblin Dirigible and Disciple of the Vault and Bas (seat C) got Vulshok Berserker and Serum Tank. Tim first took Turn to Dust and then mispicked Spellweaver Helix. He probably thought it was another card, or he might have felt like raredrafting. This meant that a Soldier Replica was left for Andre.

After three boosters the colors seemed to be distributed in this way:

C 1000 told me that their original plan was to go Affinity in the C seat, GB in the B seat, and WR in the A seat. But since the only possible picks for Sven cards in the first 2 boosters were cards for an Affinity deck (Frogmite, Elf Replica, and 2 artifact lands) they decided to switch. This meant that Bas probably had to go white.

Daniel opened booster 4 and took Somber Hoverguard for himself, while Andre got Shatter. Sven took his second Frogmite, Tim picked Creeping Mold, and Bas snatched up the red Myr. HaJo had the wheel and after he first took Wizard Replica, his team began arguing (in hand signals, it's always a funny thing to see) whether to pick Clockwork Vorrac or Vulshok Gauntlets. Eventually HaJo chose the Vorrac, but Andre surely was surprised when the booster came back to him and the Gauntlets was still left there for him to pick. Team C 1000 took Alpha Myr, Dross Prowler, and Tree of Tales instead.

Booster 5 was a good booster for Team C 1000, as there were only 4 good cards. Andre first took Blinding Beam, Sven took Thirst for Knowledge, Tim got Tel-Jihad Archers, and Bas picked Goblin Replica.

Booster 6 wasn't deep either; Sven (A seat) got Neurok Spy and Bas (C seat) got Skyhunter Cub. The other notable cards in the booster were Krark-Clan Grunt, Rustmore Ram, Yotian Soldier, and Aether Spellbomb. Tim decided that he wasn't going to need any of the artifact creatures for his G/B deck and felt that Aether Spellbomb was the best card to hate, so he went for that one.

So far for the first round of boosters. It was now clear what colors everyone would be in for the rest of the draft:

Sven opened his second Mirrodin booster, and saw lots of good black cards: Betrayal of Flesh, Consume Spirit, and Pewter Golem. He realized that by not picking a black card, his teammates might get better picks and made a hand signal to make that clear. In general it's a good strategy to leave lots of cards of one color in the booster, because then the opposing team won't be able to hate them all and your teammates will then get good picks, but not in this case. Betrayal of Flesh is way better than the other black cards in that booster and easily splashed in an Affinity deck, so after thinking over the pick again, Sven settled for the Betrayal. Andre got Spikeshot, Daniel Pewter Golem, and HaJo Tel-Jihad Archers. Bas picked Fireshrieker and Tim got the Consume Spirit.

Booster 8 was unexciting: Raise the Alarm for Andre, black Myr for Daniel, Deconstruct for HaJo, Goblin Dirigible for Bas, Creeping Mold for Tim, Nim Replica for Sven and some other random cards. Nothing fancy.

Troll Ascetic was hiding in booster 9 and found his way into HaJo's deck. Daniel, who opened this booster, picked Bonesplitter over Somber Hoverguard. While this reporter thinks that in general Somber Hoverguard is better than Bonesplitter, it was a smart pick nevertheless. It meant Bas didn't get a good equipment for his white deck and Somber Hoverguard - which found his way into Sven's deck - isn't the best against a green deck, with Tel-Jihad Archers and most importantly Tangle Spider in the format. Bas got the red Myr and Tim a Stalking Stones out of this meager booster.

HaJo opened and happily picked Grab the Reins out of the next booster. Moriak Scavenger, Goblin Replica, Taj-Nar Swordsmith, Shatter, Skyhunter Patrol and the blue Myr were left in this booster. Team C 1000 positioned Goblin Replica in the C seat, Moriak Scavenger in the B seat, and Shatter in the A seat. A fine way to do it, but maybe it was better for Tim to hate one of the good white cards instead of picking Moriak Scavenger, which wasn't going to do much for him nor for Daniel. Or possibly Bas ( C ) could've picked Skyhunter Patrol, Tim ( B ) could've picked Goblin Replica, and Sven ( A) the Shatter. Or maybe Patrol in A, Shatter in B, and Replica in A. Endless possibilities in this interesting booster and I'll leave it to the reader to think about this.

Booster 11 was a good one for C1000: Luminous Angel, Slith Bloodletter, and Pewter Golem were the only three good cards in the booster and there wasn't much left for $MIR.

Shatter for Tim and Somber Hoverguard for Sven in the next booster. Andre got Raise the Alarm, Daniel Chromatic Sphere and HaJo the red Myr. Bas wheeled Isochron Scepter and Bottle Gnomes. HaJo made a remarkable pick: Trash for Treasure. Maybe it's secret german tech? Daniel got Tree of Tales and Andre an Ogre Leadfoot, leaving an Alpha Myr in the booster for C 1000.

Booster 14 and 15 were uneventful. Fine drafting on both teams, and everyone got some playable cards for their decks. The highlights were Wand of the Elements for Bas, Tangle Spider and Echoing Ruin for HaJo, Murderous Spoils for Daniel, and Specters Shroud for Andre.

And eventually we end up with the last booster: Essence Drain for Sven and Emissary of Despair for Tim were the easy picks. Now Bas had the choice between Loxodon Mystic and Leonin Bola and he took the Mystic. An oversight here might have been that now his opponent Andre, who had just picked Leonin Skikari, now got the Bola. If you hadn't noticed yet; Shikari and Bola is an insane combo! Other notable cards in the booster were HaJo's 3rd (!) Tangle Spider and three possible picks for Daniel: Quicksilver Behemoth, Spire Golem, Mephetic Ooze. He made his teammate hate the Spire Golem and took the other 2, feeling that he needed answers to his opponent's fatties.

During deck construction I asked the teams how they felt about the draft.
Sven: "We didn't really know what we were doing, we just picked some cards. I don't feel we drafted well but it was only the 2nd team draft in our lives".
Andre:" Our opponents were clearly inexperienced. They focused more on what they wanted for their own decks than on what the right pick was for the whole team. They didn't hatedraft much either." 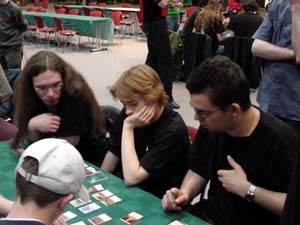 Sven's matchup seems pretty lopsided. His opponent HaJo has 2 Tel-Jihad Chosen and 3 Tangle Spider and it's hard for him to get through that defence. He actually put Whispersilk Cloak, Dross Prowler, Vermiculus, and Shriveling Rot in his deck to have an out against a Tangle Spider.
Bas VS Andre Muller seems like an interesting matchup. Both have very decent White/Red decks with the occasional bomb, and I don't think there is a clear favorite here.

Daniel Zink VS Tim will come down to whether Tim can draw his removal or tricks. Daniel has a couple huge creatures that can hold off Tim's entire force (2 Quicksilver Behemoth and 2 Pewter Golem amongst others) and if Tim will be able to deal with those, then he has a good chance.

I think overall $MIR is the favorite in this match. They drafted better and they have slightly better decks. But still C 1000 didn't do a bad job for their 2nd team draft in their life. While they didn't communicate too well and made a couple bad picks, they still managed to get good decks.