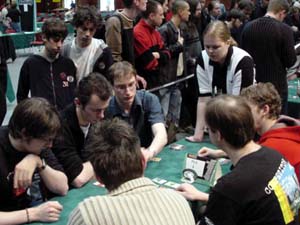 round's feature match is an all-Dutch battle. Former World Champion Tom van de Logt, and Kamiel Cornelissen's two brothers Stijn and Jesse form up Schietkoe. Schietkoe made day 2 in last year's team Pro Tour Boston, so it surely is a team to be reckoned with. Schietkoe is Dutch for "Shoot Cow" and it refers to the team's love for Minotaurs. Anaba Shaman is their favorite one, and Schietkoe is their nickname for it.
Bram Snepvangers, Ruud Warmenhoven and Didier Deurlo form up www.toernooicentrum.nl/faal. Their team name is the website of the huge 600 m2 new gaming centre that's going to be opened in about a month by Eelco van Ruth in Amsterdam. This team was thrown together at the last minute because Ruud and Bram's original 3rd Wessel Oomens was caught cheating on Ruud's girlfriend. That caused a huge fight between the two former buddies, and they aren't on speaking terms now. Didier is a good substitution. He's another one of the many unknown, but good Dutch players. Both teams have been storming this tournament and are now at the top of the standings with 27 points. The winner of this match is probably a lock for top 4.

Both teams already had a color distribution strategy planned out and were planning to follow it if nothing weird would happen. The strategy of Toernooicentrum (I'll use that to refer to www.toernooicentrum.nl/faal from now on since it's easier) was to put White/Red on the A seat, Blue Affinity on the B seat, and Green/Black on the C seat. Schietkoe was planning to put Green on the A seat, White on the B seat, and Blue Affinity on the C seat and divide red and black in a suitable way.
Toernooicentrum won the toss and they decided to kick off.

Booster 2 offered a difficult pick for Didier: Mirror Golem or Electrostatic Bolt. While this team was originally planning to put Green/Black on the C seat they decided that Electrostatic Bolt was significantly better than Mirror Golem, and therefore switched their plan. Didier took Electrostatic Bolt, which meant that he was going to be Green/Red and Ruud had to switch to White/Black. The Mirror Golem ended up in Stijn's pile, Tom picked Luminous Angel, Jesse his 2nd Pyrite Spellbomb, Ruud got Duskworker, and Bram the blue Myr and an artifact land.

In booster 3 Schietkoe positioned One Dozen Eyes, Electrostatic Bolt, and Myr Enforcer on their A, B and C seat respectively. Ruud took Skyhunter Patrol and Nim Lasher, Bram got Seat of the Synod and Wizard Replica and Didier picked Bonesplitter and the green/white Talisman. There was some miscommunication between the members of Toernooicentrum, because Ruud wanted the Bonesplitter for himself, but instead Didier accidentally snatched it up.

The 4th and 5th boosters offered no interesting strategy changes or fancy picks. The highlights were Shrapnel Blast for Tom, Loxodon Warhammer and Neurok Spy for Jesse, and Skyhunter Cub for Ruud. After the first 5 boosters, Ruud (A) had picked white and black cards and Bram (B) had an incredible amount of artifact lands, mana Myrs, Spellbombs and a Myr Retriever and Scale of Chiss-Goria for his Affinity deck, but the only "real card" he had so far was a Somber Hoverguard. Didier (C) was green/red. On the other side of the table it seemed that Jesse (C) was the Affinity player with 4 Spellbombs so far, Tom (B) was planning on a white/red deck and Jesse (A) was green for sure with his second color being unclear. He had a Vulshok Berserker in red and a Reiver Demon in black.

Booster 6 was deep and Toernooicentrum spent some time communicating with each other in order to figure out the optimal picks. Eventually Ruud took Barter in Blood, Bram Mindslaver, and Didier Tel-Jihad Archers. Schietkoe was presented a Tel-Jihad Exile and Slith Predator for Stijn, Isochron Scepter and Goblin Replica for Tom, and Frogmite and the green Myr for Jesse.

The drafting of booster 7 and 8 was pretty straightforward. Everyone got good but non-interesting cards in their colors. Tom picked his second Isochron Scepter, giving him the opportunity to draft a deck focused around that.

Then Tom opened his booster and the best cards were Terror, Tel-Jihad Archers and the white and the green mana Myr. After some discussion they gave Stijn the Archers and Tom the white Myr. Tom might have considered picking the Terror there, since it would go well with his 2 Scepters and it would deny the opposing team the black removal card. But since Terror wouldn't do anything against Bram's mostly-artifact deck, the white Myr he picked seemed fine. The green Myr eventually went to Didier and Terror to Ruud.

Booster 10 gave Stijn a first pick Goblin Replica. There were 3 good cards left in the booster: Skyhunter Patrol, Looming Hoverguard and Auriok Bladewarden. Ruud picked Patrol and Bram Hoverguard. Toernooicentrum was quick to decide that Didier should hate the Bladewarden, since the other possible pick for him was Yotian Soldier and that one didn't fit in Didier's deck.

Out of the next booster, Spikeshot Goblin was picked by Didier, Granite Shard by Bram and Leonin Scimitar by Ruud. This left Clockwork Vorrac and Thoughtcast for Jesse, Razor Barrier and a random Nim Shrieker for Tom, and Copperhoof Vorrac and Elf Replica for Stijn. Granite Shard, while probably not the best card for Bram were it a booster draft, was definitely the pick for him in this team draft. Not because Tom had lots of one-toughness guys, but because Tom had 2 Fractured Loyalty that he would surely be planning on playing in his White/Red deck and Granite Shard foils that plan.

Booster 12 was an interesting one. The good cards were Mind's Eye, Loxodon Warhammer, Tel-Jihad Archers, Pyrite Spellbomb, Viridian Shaman, and the white Myr. Toernooicentrum made the right picks in Mind's Eye for Bram and Loxodon Warhammer for Ruud. This meant that Schietkoe, who had only one green player, had to hatedraft the Tel-Jihad Archers instead of picking the green Myr for themselves.

The first three Darksteel boosters were pretty uninteresting. All picks were easy and the teams got the positioning of the cards between team members right. No fancy things happened; I'll just list the better picks. Ruud got Chittering Rats and Dross Golem for his deck and hatedrafted some. Bram picked Vulshok Morningstar and Neurok Prodigy. Didier picked Ageless Entity and Echoing Ruin. Stijn got Echoing Decay, Juggernaut and Essence Drain. Tom took Emissary of Hope, Loxodon Mystic and Razor Golem. Jesse took Neurok Prodigy and Emissary of Despair.

Booster number 16 started out fine, with Echoing Ruin for Tom and Arcbound Crusher for Jesse. Ruud picked Grimclaw Bats and Bram Arcbound Bruiser. But then some miscommunication occurred and Didier suddenly picked Unforge. While Didier's opponent Jesse had Loxodon Warhammer and this pick meant that Jesse had no access to Unforge as an answer to Ruud's Warhammer, it wasn't a better pick than the Stand Together which was still there in the booster and now found its way into Stijns deck.

The next booster offered Vulshok Morningstar for Jesse, Echoing Decay for Ruud, Vedalken Engineer for Bram and Thunderstaff for Didier. Jesse took Roaring Slagwurm and a hatedrafted Neurok Prodigy, while Tom got Pteron Ghost and Stir the Pride.

The draft came to an end with Ruud's last booster. Toernooicentrum got 3 great cards: Greater Harvester, Essence Drain, and Echoing Ruin in the A, B and C seat respectively. There were still 6 playables left for Schietkoe, making this last booster a fine one for both teams: Grimclaw Bats and Nim Abomination for Stijn, Arcbound Bruiser and Arcbound Stinger for Tom and for Jesse Dross Golem and Echoing Truth. 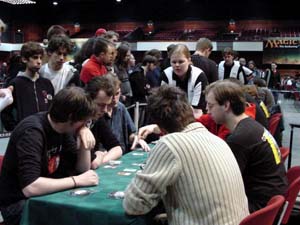 Both teams drafted well. There was the occasional miscommunication, but both teams had a good understanding of the draft, positioned their cards well, hatedrafted were needed, and ended up with good decks. It was an interesting draft to watch. It seemed that the teams had a different approach to the draft. While Schietkoe seemed pretty laid-back and didn't communicate more than necessary, Toernooicentrum sometimes went into a wild flurry of hand signals when they were presented a difficult booster.

Ruud vs Stijn seems like a fairly even matchup with both players having decent decks and an equal chance to win. Didier VS Jesse seems like another 50/50 matchup.
Bram seems to be the favorite in his match against Tom. Tom has a deck where equipments would've been really good in, but wasn't able to pick any in the entire draft and that severely hurt his deck. So probably Bram will win and either Ruud or Didier has to win in order to give Toernooicentrum the match win and top 4 berth.