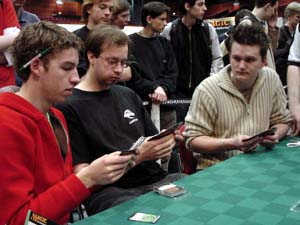 beginning of this round was quite hectic. Schietkoe and Team Burkas went for the ID on table 1, securing the top 4 for both of them. This reporter was originally assigned to table 2, where the German team The Unusual Suspects was paired against the French team NPC all Stars. They were discussing a draw for a while.

The top of the standings at the beginning of this round was as follows:

The Unusual Suspects would be in the top 4 for sure with a draw. If NPC Burkas would accept the ID, then they would put their fate in the hands of www.toernooicentrum.nl/faal. If that team would lose, then NPC All Stars would be 4th, beating other 28 points teams on tiebreakers. If that team would win, then NPC All Stars would be out top 4 for sure. Eventually they went for the risky ID.

After it was clear what the consequences of that ID exactly were and what table should be covered then, the first two boosters had already been drafted, so I can't tell you what exactly happened there. Anyway, the draft this report will focus on is www.toernooicentrum.nl/faal (playing for top 4) vs Team $MIR (playing for extra money).

Team www.toernooicentrum.nl/faal is a last minute concoction. Didier is a substitution for Wessel Oomens, who was kicked out of the team after he cheated on Ruud's girlfriend. Wessel commented on this matter that the "girl" in question actually turned out to be a guy when he got to "know" her a little better.
Team $MIR is formed up by Daniel Zink, Hans Joachim (HaJo) Hoh and Andre Muller; three German pro players.

HaJo opened booster 3 and took the broken Glissa for himself. Daniel got Somber Hoverguard and Andre picked Pyrite Spellbomb. Toernooicentrum also had fine picks: Ruud got Raise the Alarm and Isochron Scepter, Bram got Tree of Tales and Nim Shambler and Didier took Tel-Jihad Archers and the red Myr.

Daniel picked Thirst for Knowledge out of booster 4 and gave Electrostatic Bolt to Andre. So far for the good cards in the booster, since all there was left was Alpha Myr for Ruud, the blue mana Myr for Bram and Pyrite Spellbomb for Didier.

Ruud then opened his booster and it was insane for Toernooicentrum: Ruud got Arrest, Bram got Terror and Didier got Loxodon Warhammer. The next best card was a mana Myr. Only three great cards and all others being marginal; that's the best thing that could happen to Toernooicentrum.

Then the draft changed direction and Ruud opened his second booster. He picked Shrapnel Blast, leaving Clockwork Dragon for Andre, Myr Enforcer for Daniel and Tel-Jihad Archers for HaJo. Tel-Jihad Exile and Moriak Scavenger tabled and made their way into Didier's pile, while Bram took the blue Myr and Lightning Greaves.

Out of booster 8, Andre picked Raise the Alarm, Daniel picked Thirst for Knowledge and HaJo picked Deconstruct. Now Toernooicentrum went into a flurry of hand signals, quickly trying to figure out how to divide the cards optimally between the three of them. Eventually they settled on black Myr and Nim Replica for Didier, Irradiate and Aether Spellbomb for Bram and Ruud picked Cathodian and Nim Shrieker.

Daniel opened the next booster and took Pewter Golem for himself and shipped Spikeshot Goblin to HaJo. Hematite Golem for Didier (C) and Slith Ascendant for Ruud (A) were the clear picks. Bram had to decide between Nim Lasher or hating Isochron Scepter or Skyhunter Cub from Andre. He settled on Nim Lasher, planning on a Nim theme deck. Bram's deck at that point consisted of 4 Nims, Spellbombs, artifact lands and mana Myrs. Bram is known for awkward limited strategies and it clearly showed here.

So far for the Mirrodin cards. The first Darksteel booster was opened by Bram and 2 cards stood out: Vulshok Morningstar and Fireball. Toernooicentrum thought about giving the Morningstar to Didier and Fireball as a splash in Bram's deck, but eventually they did it the other way round.

HaJo opened the next interesting booster. Neurok Transmuter was the clear pick for Daniel, and the other 2 best cards were both red: Vulshok War Boar and Echoing Ruin. Andre and HaJo were both red, so they basically had to decide which one of them could use the War Board the best. Eventually Team $MIR decided it would be the best pick for HaJo and that meant Andre ended up with Echoing Ruin. Toernooicentrum still got decent picks out of this booster: Unforge and Tel-Jihad Wolf for Didifer, Whispersilk Cloak (insane with all the Nims) and Arcbound Bruiser for Bram and Steelshaper Apprentice and Grimclaw Bats for Ruud.

Booster 16 was deep. Daniel took Fireball and Andre picked Leonin Shikari. Both are great cards, but Toernooicentrum got a fair share of the booster as well. They took Razor Golem, Neurok Prodigy and Echoing Ruin. HaJo wheeled Arcbound Hybrid for himself and hated Loxodon Mystic to make sure there was no decent pick for Toernooicentrum left.

Andre first picked Vulshok Morningstar out of his booster, leaving Pteron Ghost for Ruud, Wand of the Elements for Bram and Barbed Lightning for Didier in the booster. The only playables left for HaJo and Daniel to pick were three green cards. HaJo picked Tangle Spider and Tel-Jihad Wolf for himself and let Daniel hate Tanglewalker. 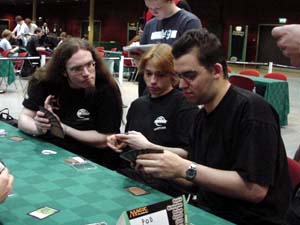 The last booster of this draft was opened by Ruud. Toernooicentrum was presented with Test of Faith, Razor Golem, Vulshok Morningstar and Quicksilver Behemoth as good cards. Ruud selected Test of Faith over the Golem and the Morningstar went to Didier. Bram felt that he needed Whispersilk Cloak for his Nim deck more than any of the 'convential good picks' and chose the equipment for his deck, leaving some good cards for $MIR.

This draft showed good drafting on both sides. Toernooicentrum probably got better cards and better decks overall, but the matchups seem close. It'll probably now come down to who plays better and who has the better draws.