Saito entered his third draft with a perfect 6-0 record and started the second half of competition with a strong chance at Sunday, and the slap-slap-slap of Mr. Saito striking himself told the world he knew it. A big finish here would all but guarantee Day Three play.

Saito's opener appeared to be a strictly average collection. Dark Withering, Search for Tomorrow, and Icatian Javelineers were all fine cards for a deck, but underwhelming as first picks. The rare was another matter. Vesuvan Shapeshifter was not only the only blue card in the booster, it's a very strong one. Saito grew visibly excited at the opportunity to start the draft with blue, and happily took the rare. The next pack had another present for Tomoharu, the timeshifted Serrated Arrows. Blue's weakness has always been creature elimination, and Serrated Arrows filled that hole admirably. The Arrows are a premiere card; to get one passed in a draft is a rare treat indeed.

The next booster was loaded to the brim with power, and the pick here would define the rest of Tomoharu's draft. Sudden Shock, Dark Withering, Amrou Scout, and Watcher Sliver were all viable, but Tomoharu went with another timeshifted card: Verdeloth the Ancient. After drafting three cards with come-into-play effects as his first three picks, Tomoharu naturally picked up a bounce spell as his fourth, the split second Wipe Away.

The next booster had the decent Herd Gnarr, and the next had the vastly underrated Fathom Seer. An astonishing seventh-pick Tromp the Domain had to have Tomoharu wondering if he was the only green player at the table. The rest of the pack wound down with more solid green/blue cards, including a fourteenth pick Lord of Atlantis. 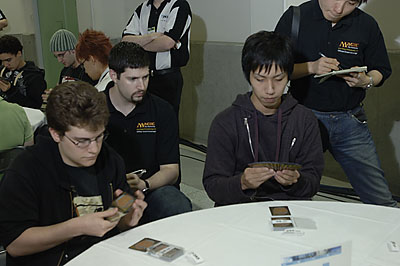 At Limited Pro Tours the packs are pre-opened and stamped, to prevent people from adding in cards brought from home. Everyone gets three plastic boosters of fifteen cards, instead of the normal shrink wrapped variety one finds in normal drafts. Part of the process of playing with these special cards in Pro Tours is counting them, to ensure there are actually fifteen cards. Mistakes, while rare, have happened, so players are required to confirm that someone didn't make an error in the stamping/sorting process. When Tomoharu was told to count his booster (face down), his timeshifted card was facing the opposite direction. Tomoharu quickly turned it around, but not before we saw a casting cost of [2G] and what looked like some kind of pachyderm in the art. When the table got the signal to officially look at the booster and start the draft, Tomoharu sloooowly examined each card before getting to the final card, the timeshifted one. Sure enough, a Call of the Herd was staring back. Saito ever so gently laid the Odyssey special onto his collection, and waited for the next booster.

Nothing that special arrived in the next few boosters until pick five, where Tomoharu got to add a Prodigal Sorcerer to his deck. Between Tim and Serrated Arrows, Tomoharu's green-blue deck was looking pretty removal-heavy. More Herd Gnarrs followed, as well as a couple of Sprout. Normally a weak card, Sprout looked a lot better when it could give Herd Gnarrs +2/+2 as an instant and provide a 2/2 itself via Verdeloth. 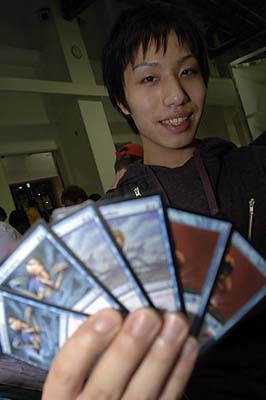 Saito's final run started off with a doozy: Fledgling Mawcor, Errant Ephemeron, and Gemhide Sliver, as well as Serra Avenger and Strangling Soot. The Mawcor and Ephemeron were both deeply debated. Although the Mawcor fit the ping theme better, Tomoharu went with Ephemeron. The suspender is overall a touch stronger than the morph, and it fit into the yet-unfilled two mana spot. A second-pick Riftwing Cloudskate did similar good things in the next pick, as did Snapback the pick after. Fourth pick was the real treat, another Errant Ephemeron!

By this point, Tomoharu's deck was looking absolutely sick, but that didn't stop him from adding another juicy rare to the pile. Wurmcalling was already great, but combining the buyback with all the Herd Gnarr meant consistent 4/4s across the board. Spiketail Drakeling and Ashcoat Bear rounded out the rest of the picks.

Saito's deck looked like an absolute beating by the end of the draft. Tomoharu had 3/3s on the ground, 4/4s in the air, Serrated Arrows and bounce to disrupt the opponent, and if that wasn't enough, two green X spells. A powerful build by any account, Saito just put himself in a great position to make the top 8 at Pro Tour Kobe.