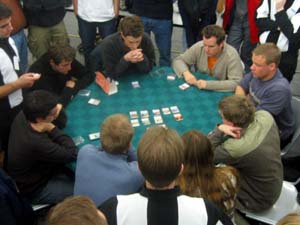 After 15 rounds the dust settled and the final eight players sat down for the last draft of the day. Georgios Kapalas won the swiss and chose to be in the fourth seat, which puts his opponent Dirk Hein in 8th.

Hannes opened the first booster and it turned out to be not very exciting. His first pick was a Myr Enforcer and Yann then showed color preferences by drafting a Goblin Replica over a Skyhunter Patrol which Stefan gladly scooped up. Hamon opened the same common run and both he and Schwaiger stuck to their guns. Georgios, sitting behind a white mage, moved into Green/Red while Reinhard Blech picked up a few blue cards. Steven behind him drafted black, just like Dirk Hein in 8th seat. Tobias Kroll between them started with green and blue cards.

Things were shaken up when Schwaiger opened an insane pack in seat 3. He took a Loxodon Warhammer, passing a Tel-Jilad Archers to Kapalas, a Solar Tide to Blech and a Terror to Gouin. Kapalas then made a highly questionable pick when he chose Vulshok Battlegear over a Lodestone Myr. Blech obviously liked that and opened a Triskelion in his pack to go with the other rare creature. The next few packs were not all that interesting until Dirk Hein opened and picked Terror over Grab the Reins. All he had at that point were two mediocre green cards while Kroll in front of him was solidly drafting that color. Both Kroll and Gouin were not picking any red cards and Dirk definitely should have jumped in. He did not and Scholz was more then happy to take the powerful sorcery.

All the while both Gouin and Hamon looked kind of lost. Neither one got their hands on any particularly powerful cards. Things did not change for Steven in the second set of packs. He chose Mesmeric Orb over several other playable cards in pack 9 which gave Blech a Slith Ascendant fourth. And Blech was doing quite well. He already had the three rares and he got passed two Shatters and a Detonate, which made it to him fifth pick. Hamon was also starting to look better as he got a very late Domineer and several good blue/green cards. Kroll also managed to open himself a Glissa, Sunseeker but overall his deck did not seem all that impressive, especially as his opponent Stefan was piling up good cards like evasion creatures and two copies of Arrest. The 12th pack was a bit crazy as Blech, Kapalas and Schwaiger all refused to take a Mask of Memory, which would have been especially great in Schwaigers deck that had quite a few flying creatures. Yann was more then happy to add it to his deck which already included two Neurok Spys. Gouin also made one quite strange pick when he chose Looming Hoverguard first over playable cards in his colors, Green/Black. His deck was pretty bad at that point though and the matchup against Yann seemed lost, so he might have figured that he can add some power to his matchup by going three colors. Although adding a card with two blue mana in its casting cost might not be a good idea.

The third set of packs started with a bang. Scholz opened Spikeshot Goblin and Leonin Sun Standard. He chose the goblin over the artefact as Blech had more then enough artefact removal to deal with the otherwise better rare. Hamon got a Viridian Shaman from that pack and the sun standard went directly into Schwaigers almost mono-white deck. Yann opened a MegAtog next but took Trolls of Tel-Jilad. Stefan, who did not have a second color, chose to stick with his guns and went with a Taj-Nar Swordsmith that could get him his Loxodon Warhammer. Georgios was more then happy to take Atogs big brother, which finally gave him some hope against Dirk Hein. Dirks deck looked pretty good at that point, even though he went for the not very powerful Consume Spirit/Fangren Hunter-archetype. High card quality can more then make up for that problem though.

Schwaiger then took a Skyhunter Cub over a Mirror Golem without sufficient equipment to turn the Cub from playable to great. That was great news for Kapalas who really needed any good cards he could get his hands on. Kroll screwed up in the very same pack, when he chose Leonin Scimitar over the more powerful Fangren Hunter. Blech did not open as much quality in the next pack and opted for an off-color Betrayal of Flesh. Gouin got a Terror and Kroll a Deconstruct. The Frenchman then opened his final pack and saw no playables in either black or green and went with a Somber Hoverguard. A smart pick anyway as the flier would most likely go all the way around to Yann Hamon who was his quarterfinal opponent. The last couple of packs were rather uneventful. Kroll took an Arrest over a Deconstruct which makes his mana considerably worse and Hein picked a Pyrite Spellbomb he most likely can not play anyway as splashing in a deck with multiple Consume Spirits and double green cards is no smart plan.

In the end the decks ended up like this:

Blech has the most powerful deck in his bracket and I believe he will end up in the finals. In the other bracket only Hamon has a really good deck and I expect him to make his third GP finals within a couple of months. He does not have the tools to beat Blechs deck and Reinhard should win his second GP title here after Genova if everything goes the way I expect it to be.