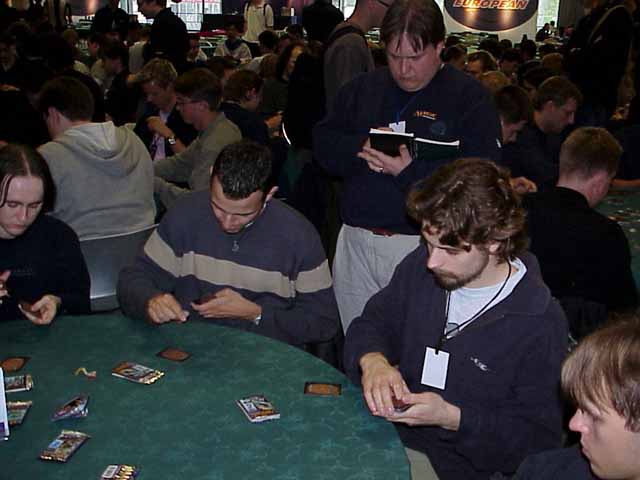 There were 33 3-0 players after the players were done with their first draft decks. With 302 players competing this weekend, no one can afford to give away any matches. Table 2 was probably the toughest table with during the second draft. On one side of the table Noah Boeken was feeding Michael Debard who was feeding Raphael Levy. (click here to read Brian Hacker's analysis of Levy's draft.) I stood behind Ben Ronaldson, who was being fed by Andre Konstanczer.

Ronaldson is the unknown member of the European Alliance. Alliance members are universally quick to credit him as a major contributor to the team. He did a lot of the team's playtesting before their breakout performance at Pro Tour New York (where they claimed 3 of the coveted spots in the Top 8) despite being unqualified for the event. He finally broke out with a tournament success of his own a few months ago when he won English Nationals. Konstanczer is a long-time Pro Tour regular with one PT Top 8 to his credit and he is the 2000 German national champion.

Ronaldson had a tough first pack: Deepwood Drummer, Enslaved Horror, Drake Hatchling, Spidersilk Armor, Dehydration, and Giant Caterpillar. What would you do? Enslaved Horror isn't really good enough to run the "cut black" strategy. Ronaldson went with the Drake Hatchling. Konstanczer then passed him a pack with 5 good white cards and nothing else but a Rushwood Elemental. Ronaldson went with Story Circle (over Nightwind Glider) probably hoped to get Orim's Cure or Ramosian Rally back (Afterlife was the 5th good white card in the pack). Pack #3 had Blockade Runner, Dehydration, Deepwood Drummer, Warmonger, and Undertaker. This one was easy - Ronaldson clearly wanted to go with a blue card and the Runner was clearly the best option.

When Ronaldson picked up his fourth pack he saw Thermal Glider, Cho-Manno's Blessing and Crenellated Wall. Konstanczer's message was coming through loud and clear, saying "hey dude, go white, I don't want it." Ronaldson took the Thermal Glider. He then took Pious Warrior over Wishmonger from his fifth pack. This pack was emblematic of Ronaldson's entire draft - he was forced to make a decision between two cards of a similar power level and the cumulative weight of all these decisions would make or break his draft.

Pack six still had a Squallmonger in it, but Ronaldson wanted to stick to his colors (and knew he'd passed some decent green) so he drafted Brainstorm. Next up was Balloon Peddler over Disenchant, followed by Ramosian Rally (over another Peddler). Ronaldson played nicely when he took Renounce and passed on Deepwood Drummer. He then took Rally #2 instead of Orim's Cure and killed a Flaming Sword rather than add Cho-Arrim Legate to his pile. Like I said, his draft was full of close calls and I'm not sure which ones were right and which (if any) were wrong.

Having seen no black or red, it was no surprise to me when I looked over and saw Konstanczer review a red deck with a Snuff Out and a bunch of late green cards.

Nemesis was not kind to Ben Ronaldson. He opened three amazing cards of different colors, but none were blue or white. He eventually settled on Topple and passed on Ancient Hydra, Battlefield Percher, and Blastoderm. (Konstanczer used the full time to decide on Ancient Hydra for his own deck.) Next Ronaldson took Wandering Eye over Rathi Fiend, Rathi Intimidator, and Seal of Fire. (Konstanczer took the Seal, not seeing a good enough reason to switch back into black.) When Ronaldson took Oraxid and passed Massacre to Andre, Andre took the black bomb, but Konstanczer never wound up with any other black cards and settled into red/green.

After drafting a second Wandering Eye (over Seal of Cleansing and Cloudskate), Ronaldson had another tough call: Defender en-Vec or Defiant Falcon? He went with the Falcon. The next pack made his day: hello 6th pick Ensnare! Ronaldson then finished out Nemesis with Daze, Seal of Removal, and Trickster Mage. Going into Prophecy, Ronaldson basically had a blue/white weenie deck with the creatures equally divided between 1 and 2-power plus a couple Ramosian Rallies to pump them up with.

Prophecy pack #4: Spiketail Hatchling, Trenching Steed, Mageta's Boon, Well of Life, or Quicksilver Wall. Ronaldson knew he was a beatdown deck by now and not really a control deck so the last two were out. He decided on Mageta's Boon #2, though I wonder if he would have been better off with another creature here.

The next few packs were easier: Mercenary Informer (over Aura Fracture), Mageta's Boon #3, and then Trenching Steed (over Soul Charmer and Gulf Squid). Ronaldson wound down his draft by taking Aura Fracture (and allowing a Brutal Suppression to go by) and then counter-drafting Nakaya Shade instead of putting Rhystic Shield into his sideboard.

All in all Ronaldson acquitted himself well. He wound up in the right colors and he may have passed better cards than he drafted in Nemesis, but there wasn't much he could do about that. I doubt his is the best at the table and the difference between 2-1 and 1-2 will come down to play skill and all those tough decisions during the draft.

Ben Ronaldson ended up with this deck.