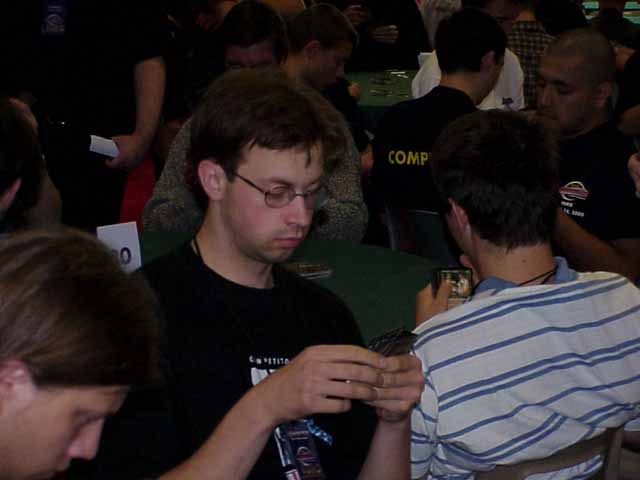 A table with 8 undefeated players usually creates an interesting table to cover for a draft. Draft table 4 featured Bram Snepvangers, one of the Dutch top players, who will be fed by the 2000 French National Champion Yann Hamon.

Bram's first booster was full of amazing cards. It contained a Volcanic Wind, Story Circle, Sever Soul, Vendetta, Aerial Caravan and Nightwind Glider. Bram picked the Volcanic Wind as it puts him in a perfect position to cut off red and get some amazing Nemesis red on the next booster. Yann passed Bram a booster full of good white as well. Picking an Arrest, Bram still had to pass up on an Orim's Cure and a Nightwind Glider, as well as an Ogre Taskmaster. Even though Bram is giving a confusing signal for white on his left, it might not be drafted there because both boosters contained more then one good white card. His next booster contained a Warmonger, Muzzle, a Deepwood Ghoul and a General's Regalia. Bram picked the Warmonger, which allowed him to also maintain his signal for red. Next pick was amazing again, adding a Ballista Squad to Bram's arsenal and he followed up with a Ramosian Lieutenant. The rest of the booster went without surprises except for the Story Circle making it back to Bram on his ninth pick.

In the meanwhile, Yann wasn't happy with his selection of cards. He had black and red mostly, with a Vendetta and a Thunderclap, but he wasn't sure of his colors yet, and had some blue as well. Bram was very pleased with his draft so far and was looking forward to Nemesis, where both white and red have incredible cards.

Bram opened a couple of those white and red cards. He had to choose between Parallax Wave, Rupture, Defender en-Vec and Lawbringer. Parallax Wave is the obvious choice here, being well capable of winning games on it's own. His second Nemesis pick wouldn't be easy. The booster contained a Flowstone Crusher, Seal of Fire and a Defiant Falcon. After his third pick Topple the quality of his picks went down rather fast, with a tenth pick Seal of Fire being the only other noteworthy pick here.

Yann was on solid B/R so far having picked up a Flowstone Crusher, Rathi Fiend, Rathi Intimidator and some other Mercenaries to make up for his creatures. Bram could use some more creatures though, as his deck is looking thin. Bram didn't continue his streak of opening amazing boosters. This time fate decided he should open 'just' a good booster containing Flameshot, Mageta's Boon, Soul Charmer, Ribcage Spider, Spitting Spider and Agent of Shauku. Bram picked the Flameshot to make sure he'd have some more control over the game. For his next pick he had to choose between a Divining Griffin and a Zerapa Minotaur. Considering his low creature count the Minotaur is the better pick here, as he has enough means to win already. He drafted some more defensive creatures in the next few boosters, picking up two Trenching Steeds and a Soul Charmer. Three Mageta's Boons made it into his deck as well.

Unfortunately Bram wasn't able to pick up some more creatures or rebel searchers. The deck may be lacking in the creature department, in the spell department it's full of powerhouses. The general quality of cards on the table was high though, so his deck isn't a sure 3-0 or 2-1. The potential is certainly there.

Bram Snepvangers ended up with this deck.