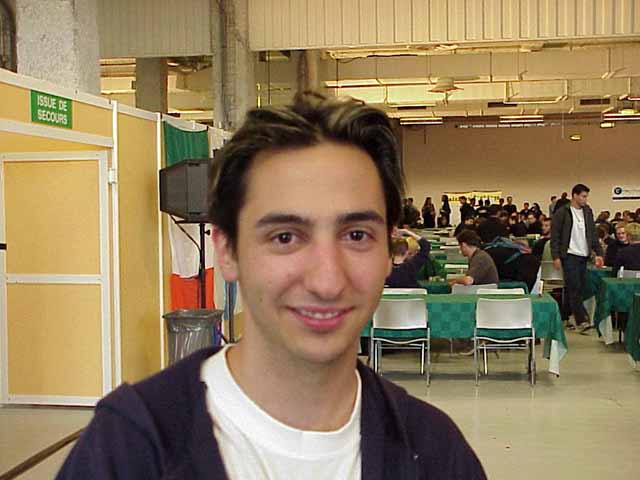 Raphael Levy was sitting just to the left of Michael Debard and both players were 3-0.

Levy opens Waterfront Bouncer, Rishadan Airship, Shoving Match and the only other high quality card is the arguable Spontaneous Generation. Levy goes orthodox with Bouncer. Next pick Stinging Barrier is obvious. An obvious Thunderclap third sets up Blaster Mage fourth, Gerrard's Irregulars sixth and Arms Dealer eighth. Dehydration fifth and seventh along with a Balloon Peddler that got passed around lie a bag of chips fill out his blue. An unfortunate late pick Rishadan Cutpurse made its way into Levy's eventual deck, which might give away the fate of Levy's next two packs. As far as Mercadian Masques goes, this was grade A material

Levy opens well in Nemesis. He selects Rupture over Flowstone Crusher and then his tough pick is second where Laccolith Warrior, Seal of Fire and Ensnare all show. Levy takes the Warrior and he still has to be in pole position probably well ahead of everyone at that point. His draft would go downhill quickly though. A pedestrian third pick Laccolith Grunt and fourth pick Oraxid seem good enough, but apart from a late Daze, the rest would be disastrous. He then selects four black picks in a row, with neither a blue or red card making its way in. Fifth through eighth Levy selects Battlefield Percher, Rathi Fiend, Spineless Thug and Dark Triumph, excellent if he were playing black. He wasn't and isn't so Nemesis looks like a C-.

Pack three began with a Rhystic Lightning, a safe enough choice. Unbelievably, despite the fact that both of the players sitting on Levy's right were not playing blue or red, Levy gets nothing here. Literally nothing. He is forced to defensive draft a steal strength. The fourth pick Keldon Berserker hardly helped. Things got better with a fifth Withdraw over Zephyr Minotaur and sixth Spiketail Hatchling over Foil. Seventh was another Hatchling and eventually Levy would get a Rhystic Deluge and Fickle Efreet that would both make his deck. All in all not really the Nemesis he hoped for. A C, although its hard to indict any of Levy's picks, so chalk this one up to luck. Levy deserved better than what he got, although he probably didn't deserve as much as he got in Masques. I think Levy will play his way to a 5-1 overall record, although a sweep of the table is not unrealistic if Levy doesn't draw the worst 3 cards in his deck, Rishadan Cutpurse, Rhystic Deluge and Fickle Efreet.

While I was watching Levy, I could also see what Michael Debard was drafting. I didn't agree with some of his picks, and others I thought were really smart. One pick however could have screwed up both Levy and Debard was made by Debard third in the first booster. Debard had chosen Cateran Slayer first and then a Highway Robber second. In that second booster, he had passes on a Thunderclap which ended up being selected by Levy. Debard could have easily anticipated this and so should have known that Levy was playing red. Debard then took a third pick Thunderclap when there were green cards aplenty. Debard ended up playing green anyway and he nearly got into a war with his neighbor that he should have known better to avoid. Debard's deck ended up ok, but if a few more sexy red cards would have come in the first booster, Debard could have sent he and Levy into the 4-2 bracket.

Raphael Levy ended up with this deck.