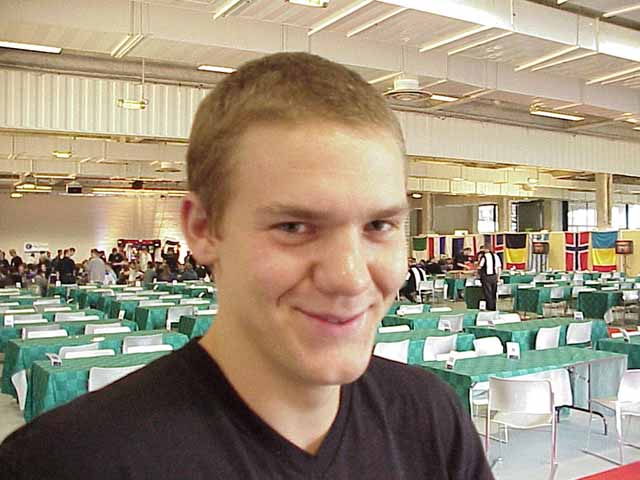 In booster 1 Svend was faced with a pretty tough choice between 3 good blue cards, a Waterfront Bouncer, a Drake Hatchling and a Dehydration. He took the bouncer and passed the Hatchling to Marcio Rodrigues the player on his left. He was then passed another very strong blue booster with both another drake hatchling and an Aerial Caravan. Svend took the Caraven and passed Marcio yet another hatchling, almost certainly fixing them both in blue. However Papp Gabor on Svend's right was also drafting blue and the colour soon dried up, Svend only getting a Saprazzan Legate and a Darting Merfolk to augment his strong start. Svend took some strong cards in other colours including Shock Troops and Deepwood Legate, but ended his first booster very much open on his second colour.

In the nemesis booster there were only 2 playable cards, seal of fire and Dominate. Svend took the Dominate, consolidating the blue he had already drafted. The next 3 boosters left Svend with no tough choices as he took a Flowstone Thopter, an Oraxid and a Rupture as the only on colour cards he was passed. (The blue being drafted on both his right and his left). He was passed another Oraxid, and a Seal of Fire, but the rest of the booster forced him to take off colour cards. Svend seemed fixed in Red/Blue and seemed to have a reasonable deck so far.

The prophecy booster contained 2 very strong on colour cards, a Withdraw and a Rhystic Lightning. Svend took the Lightning, passing yet more blue to Marcio. He was passed a Lesser Gargadon and 2 Withdraw from the player drafting blue on his right, as well as another Rhystic lightning. He took a number of solid off colour cards in the picks that followed ending up with a deck with only 9 playable creatures, but 2 Rhystic burn spells and 2 Withdraw, the Prophecy cards taking his deck from mediocre to solid.

Svend Geertsen ended up with this deck.