There probably isn't a man on the planet who knows the Boros legion better than Paul Rietzl. Known for flying the red and white flag long before guilds were even a thing, Rietzl is a master of small, fast creatures backed by burn. Gatecrash, unsurprisingly, is the perfect environment for the American pro.

He's also the perfect person to teach us how to draft the Boros Guild. 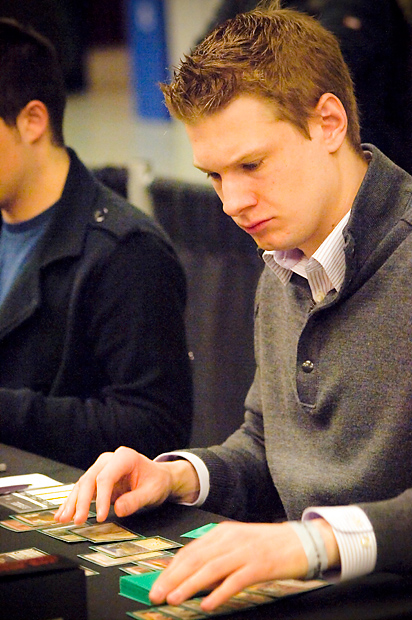 Rietzl's allegiance to the legion is so strong that he's more than willing to force the archetype. In fact, he started off his first draft of the weekend in a fashion that is sure to raise more than a few eyebrows: picking Mugging over Domri Rade pack 1, pick 1.

"I'm probably the only person in the room who would do that," Rietzl said. "I knew that would happen to me. I knew I would open a mythic in another guild."

The choice almost came back to bite him when, in the first round, he faced off against Domri Rade and was absolutely wrecked by the Gruul planeswalker in the first game. Fortunately for the Boros mage, he was able to storm back and take the match.

Given that he's already cleared the Domri Rade hurdle he set up for himself, Rietzl's plan seems to be paying off. He was able to assemble a very strong Boros deck full of everything Rietzl loves: brutally efficient creatures, a low curve, and a little extra punch at the top of the curve.

Given that his rounds were pretty universally over with plenty of time to spare, we took the opportunity to learn how to draft the most aggressive guild from the Boros master.

1 Skygames 1 Way of the Thief

The plan, as it were, was to force Boros right from the get-go, a plan Rietzl cultivated over about twenty-five practice drafts...about twenty-three of which were Boros.

"The power level of the cheap commons is just so strong," he said. "Boros has the highest floor and the highest ceiling. Even the disasters can go 2-1."

Now, before everyone reading this article rushes off to try and force Boros, a note of caution: it's not as simple as picking a guild and never taking off the blinders.

"I have a unique advantage," said Rietzl, who came in completely open about his allegiance to the legion and even tweeted as much. "I was fortunate to have [teammate] Owen Turtenwald to my right, and he knows what I want to draft. He could take Boros, he's able to do that, but then he's going to torpedo both our ships."

Armed with the knowledge that Rietzl would be taking red and white cards, even going so far as to pass a high-rated mythic rare, Turtenwald left the door open for his teammate (both players are on Team SCG) and Rietzl was able to capitalize.

But the reasoning behind Rietzl's Mugging over mythic pick goes so much deeper than that, and gives tons of insight into how to draft the Boros guild.

During the course of his testing, Rietzl created a list of all Boros cards and rated them on a scale. He played some more, got input from his teammates, and revised the list one more time. The result, he said, is "borderline perfect."

"There's some flexibility in the picks depending on your deck. For example, I took two Skyknight Legionnaires over two Syndic of Tithes because I knew I could get cheap white creatures later, depending on the situation," he said.

However, Rietzl has a very strict pick order as well as an ideal curve for the deck that he tries to stick to.

The creatures on the list, he said, are mostly interchangeable, depending on your deck. On Rietzl's scale, they were all rated a 3.5, as was Martial Glory.

Just below that, Rietzl had cards like Skinbrand Goblin, which were mostly important for filling out the curve, the relative casting costs of all of his creatures.

Massive Raid in particular, Rietzl pointed out, didn't do enough.

"The games you struggle are not the ones where you have a bunch of creatures out and a spell in hand," he said. "It's not like, in that situation, you think 'Man, if only I could kill that 2/2 or that 3/3.'"

The curve in the ideal Rietzl Boros deck is also important, he said, and looks a little something like this:

Rietzl said 15-16 creatures is ideal, while the rest can be filled with tricks and removal.

For the advanced drafter, Rietzl also further divided the Boros decks into two different camps. There's a base Red deck which Rietzl said is a bit more "all-in" with Foundry Street Denizen and where cards such as Five-Alarm Fire become more valuable. The base White deck is a bit "trickier" and involves more extort mechanics and takes better advantage of cards such as Knight Watch.

And that, in a 1,000-word nutshell, is how to draft Boros according to that man who is very likely the best Boros scholar on the planet. But it does leave one very important question for The Man Who Would Tap Sacred Foundry:

What would it take to not draft Boros?

"That's a tough one. It would have to be something amazing in a pack with no first-pick worthy Boros cards, something like Clan Defiance..." he paused. "Nope, I should pick something else because I would splash that in Boros. Something like Obzedat, Ghost Council with the only Boros card being a Martial Glory. Then I would take Obzedat."

"But if Mugging were in the pack, I would probably take Mugging."