You couldn't help but notice the triplet two-drops after Gabriel Nassif's first draft of the weekend. Many players have soundly dismissed the 2/1 first striker as virtually unplayable, a victim of its own "must attack" clause.

But then here's Hall of Famer Gabriel Nassif, defeating Martin Juza in Round 2 with little more than a Piker and a dream (okay, also a Madcap Skills). And then there's the game where Nassif cast Spike Jester and loaded it up with Madcap Skills and Deviant Glee. That is how Nassif quickly found himself 2-0 to start the weekend with a deck that doesn't fit many of the expectations of what a Dragon's Maze deck should look like.

The conventional wisdom isn't always right. And Nassif showed us just how wrong it can be with his aggressive Rakdos draft that helped him start the weekend right. 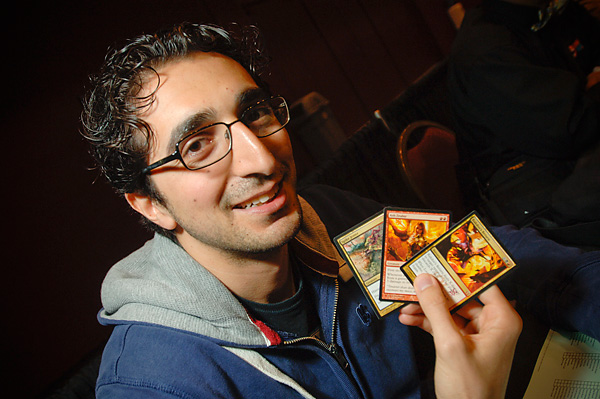 Hall of Famer Gabriel Nassif based his draft around one main color, ultimately settling into a single guild to build a brutal Rakdos deck in the first Booster Draft of the weekend.

Despite appearances, Nassif's first and third pick Rubblebelt Maakas did not indicate any kind of preference for guild or particularly aggressive strategy.

"I went in looking to stay in a two-color deck, maybe with a small splash, and to stay on my guild colors as long as possible," Nassif said.

The pack he opened had a number of options he was interested in, including Alive // Well, Zhur-Taa Druid, and Trostani's Summoner, but he decided he wanted to stay out of green.

He's also a fan of the Rubblebelt Maaka, which is an excellent bloodrush creature as well as a fine Hill Giant to cast on turn four. Nassif opted to stay out of the way and take the red card.

Second pick yielded a Weapon Surge, again instead of Zhur-Taa Druid. Weapon Surge is a card Nassif said he always likes whenever a similar +1/+0 and first strike card is printed. They're usually cheap enough to come out of nowhere and strong enough to win just about any fight. He said the overload cost puts it over the top.

From there, he said the picks were fairly easy. He took a second Rubblebelt Maaka for his third pick and a Spike Jester for his fourth pick. The Jester helped him settle into Rakdos.

Then he started taking Riot Pikers. 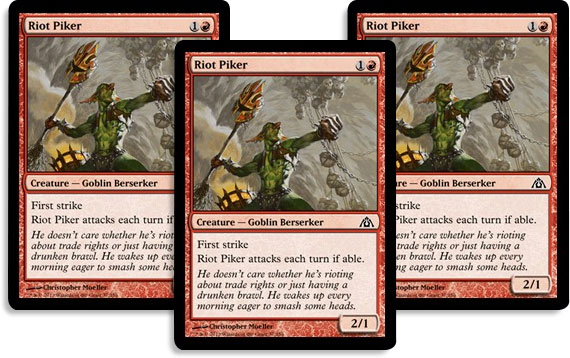 "I'm not really a big fan of all those cards that fall apart when you hand isn't good," Nassif said, downplaying the significance of his fifth, sixth, and eighth pick Riot Pikers.

But, he added, their casting cost still makes them valuable.

"Two-drops are awesome," he said. "Two-drops are just as important as they used to be, and maybe a little bit harder to get now that we're drafting Dragon's Maze."

They were certainly important in his second round match against Martin Juza, when a single Riot Piker with a Deviant Glee dealt all 20 damage, getting in three uncontested hits before Rogue's Passage deprived Juza of the option of ever blocking.

So once Nassif was firmly established in Rakdos, he stayed the course over the rest of the draft, picking up a fortunate Rakdos's Return (that he almost passed up for the less bomby but far more aggressive Frostburn Weird), an Ash Zealot, some more removal, and two Deviant Glees that, along with Madcap Skills, really made his Piker plan come together.

The story doesn't quite have the 3-0 happy ending Nassif was looking for, as he fell in Game 3 to Dennis Rachid in the third round thanks to whiffing on a one-lander for one turn too many, but he clearly demonstrated that the two-color aggressive strategies were still alive and well.