hile Born of the Gods / Theros / Theros Limited has been a format that has had weeks of games and content dedicated to looking into it, the format nonetheless has some very interesting plays, as players still explore card combinations available to the different draft archetypes.

And despite the content out there, players are still going to have their preferences going into a draft. There were certainly a lot of drafters looking at red in both pods today, one of which is Anssi Alkio, who has been blasting through opponents in these rounds with his black-red deck.

Conveniently, this draft did not deviate much from Alkio's preferences. "I want to be as aggressive as possible, but that's a given in this format" Alkio said. "I think red is my favorite color. I just try to force it every time. It's just so deep in Born of the Gods that it gives you a good base going into Theros." 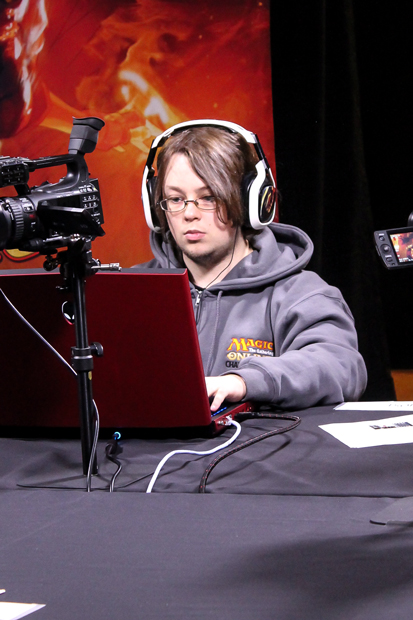 Alkio prefers red above all else in the current Theros block Limited environment.

While red is his basis, his preferences beyond that are generally even, though white is often a color that he is very wary about touching. "I'm pretty open to every other color since everything pairs well with red. I try to avoid whtie since it's just so over-drafted," he explained.

This draft allowed him to stick with his preference, his first picks solidifying him into red, and a seventh pick Pain Seer gave him the option to go black, a decision he stuck with when a Temple of Malice made it back around to him in the first pack. Comically, while the Pain Seer won him some of his games, it was also the cause for a lot of tension in his games too, with the Seer nearly killing him in the first round.

The black was particularly good to Alkio in the draft, with black offering him not one, but two Necrobites. "I think Necrobite is a strong black card, and it was going around," Alkio explained. "As you could see in the feature match [against Dmitriy Butakov in the ninth round], the opponent can play around the first Necrobite, but there's little way or reason to play around the second one." Sure enough, Butakov did not play around it, losing three creatures to Alkio's Necrobite when he triple-blocked an attacking creature.

Alkio's insane black-red deck earned him a 3-0, putting him in a good position to finish in the Top 4 with a solid Standard run.

Then there are players like Dmitriy Butakov, whose preferred cards do not include red.

"I like three colors out of five in this draft format: blue, black and white, no matter the combination," Butakov said when asked about his preferences going into today. "They have a lot of tricks and removal, and it allows you to play control. I prefer the control play-style, and in this format it usually works out."

While Butakov had his preference, he did not necessarily have the games under his belt that he'd like to in preparing for today's draft format. "I expected to play a lot of Magic in Grand Prix Vienna, but my laptop broke so I played only like 5-6," he said. "I did a lot of theory and research because nothing else was available for me." 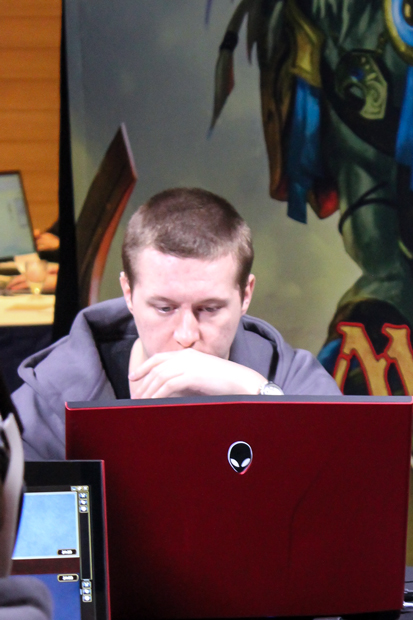 Dmitriy Butakov's draft deck for today is a spicy one.

The theory, and his preference for black especially – his favorite color due to the payoff of cards like Gray Merchant of Asphodel in the Theros packs – paid off in his draft today where he ended up in white-black. His first-pick Brimaz, King of Oreskos was of course a nice way to start things off, but the fairly average black cards in Born of the Gods led to an insane second and third packs. He picked up a first-pick Gray Merchant of Asphodel in the second pack, but since the color was reasonably open on his side of the draft, he was rewarded with a second and a third Merchant being passed to him in the third pack, upgrading his deck some good to incredible.

In the end, his deck shaped up very nicely, allowing him to win a brutal third game against Paul Nemeth's blue-green in their first draft round on a comeback despite Nemeth opening up with a perfect curve. The second round allowed him to overcome Glied's deck, but he was ultimately dispatched by Alkio's ridiculous black-red deck in the third round, ending his draft run with a 2-1 record.

However, he was not the only black drafter in Pod 1. Tamas Glied also drafted black, pairing it with blue, and he ended up with a Gray Merchant of Asphodel as well. "I played a lot of this draft format because of Pro Tour Born of the Gods," Glied said when I asked him how he approaches the draft foramt. "In the first booster, we wanted to force a color, and in the second booster we are going to get that color back."

This is what he ended up doing, forcing black with some early Servant of Tymarets, and when Siren of the Silent Song came around late in the first pack, it was clear that blue-black was an option. A slew of solid options for his deck, including a number of flying creatures, Returned Phalanxes, and multicolor powerhouse uncommon Shipwreck Singer.

And while it does have the capability of winning with damage, it also has access to Ashiok, Nightmare Weaver, a fine way to end a game.

Unfortunately for Glied, the draft did not start out well for him, with a loss due to time against Lars Dam in the first draft round. The issue in the match and the cause for the long games, he said, was primarily in Dam's Sealock Monster. While the monstrous creature has a tendency to be nothing more than a wall until a certain amount of lands are reached in most match-ups, it tends to be a pretty brutal form of damage when your opponent naturally has Islands in their deck, and this is what the Monster threatened to do against Glied in their match. And when combat racing proved to be tricky, the two players ended up winding down their timers to the last minute, with Glied running out of time before he could find a win. 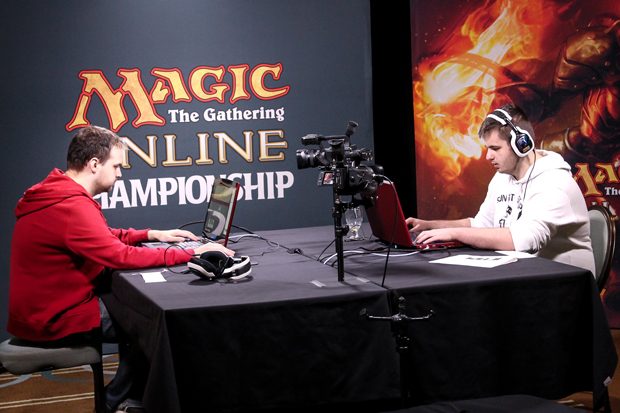 While Glied was confident in his deck, the matches, as we saw in his showdown against Lars Dam, have not been falling into his favor.

The second round also went south, with Butakov dispatching Glied 2-0 in the second round. "He has a lot of tricks and good creatures, but I have some good fliers," Glied said, noting that mana flood ended up being his undoing in the match, with too many lands making their way to his hand and not enough spells to fight back.

"I'm kind of sad that I 0-2'd with this deck," Glied remarked after his second match. "I think it's good, but it's not working out today."

Indeed, sometimes when you have the right tools for the job, the games can sometimes just play out unfavorably, and in Glied's case, these unfavorable games have led him to losing his early lead going into the day. Things did not improve in the third round, and a loss against Rune Andersen left Glied with an 0-3.

The Theros block draft format has really shaken up the standings. While Dam remains at the top thanks to a win in the first and third draft rounds, Alkio is now catching up at second place. Despite Glied's 0-3 draft, he is still closely following both at the top of the 18 point records at third place, and Butakov sitting at fourth, also with 18 points.