Ben Stark is a fan of the Orzhov guild.

That right there should be enough to get you actively seeking out Kingpin's Pets and Basilica Screechers, since Ben Stark is pretty widely regarded as one of the best Limited minds on the planet.

So you can imagine our delight when the stars aligned in the second draft of the weekend and Stark happily slipped right into Orzhov. 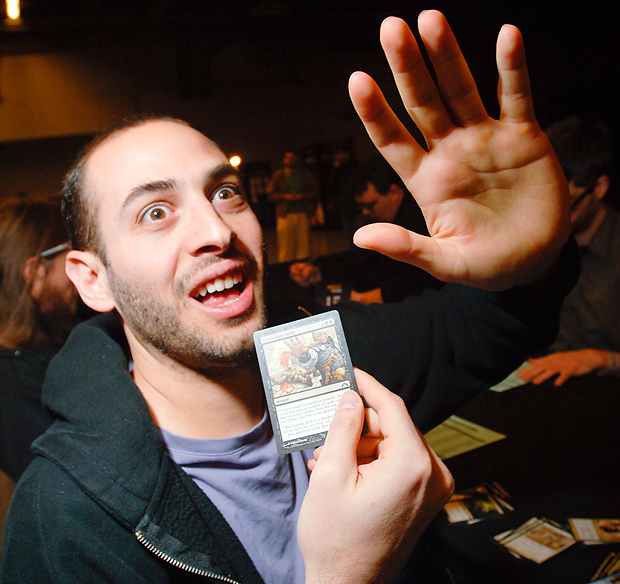 Ben Stark is great at adapting to what is open in a Booster Draft, but his preference for Orzhov showed during Day Two.

Unlike Paul Rietzl, Stark doesn't set out to draft the syndicate. He considers it, along with Boros, among his preferred guilds, but Stark has always been about reading the draft and fitting into a position he can take advantage of. But he clearly shows a preference for Orzhov.

"It's one of the deeper guilds, along with Boros," he said. "An eight-man draft can support two Orzhov or two Boros drafters, while there can usually only be one Dimir, one Gruul, and one Simic. Obviously that adds up to seven, but you get the idea."

Stark found himself in Orzhov after picking Grisly Spectacle followed by a Killing Glare. When he was then passed two Vizkopa Guildmages and several white cards over the next few packs, he was cemented into trying to extort his opponents.

Once locked in, Stark says he prioritizes cheaper spells and extort over everything. Cheaper spells, he said, become more valuable with more extort.

"If all of your spells come with 'deal two damage, gain two life,' that's incredibly powerful and it almost doesn't matter what the cards do. Your opponent won't live long," he said.

Screecher, he said, was a bit worse than the other four cards, but Stark said he would take and play as many of them as he got. The spells that are both cheap AND come with extort are the deck's bread and butter.

However, some of the more expensive extort spells, while playable, excite Stark quite a bit less. Syndicate Enforcer isn't something Stark looks for, though he will play (and is playing) the card. Similarly, Assault Griffin, while in all-star in other formats, is something he'll play much of the time, but isn't looking for.

How far is Stark willing to go to avoid expensive spells? In Pack 3, Pick 1, Stark didn't spot any Orzhov cards he really wanted, but there was a playable Guardian of the Gateless. The issue was that Stark already had two five drops, including another Guardian, and didn't particularly want another one. With no other Orzhov card in the pack, he seriously considered hate drafting a Clan Defiance.

Now, many, many drafters out there would have gladly hate drafted Clan Defiance. Many others would have been happy with Guardian of the Gateless. But most drafters are not Ben Stark (true story). Stark has long disliked hate drafting generally and avoids it almost universally. The odds, he would say, are low that you play against that particular card at any point in the draft, so low that you're better off supporting your deck rather than harming other decks by some incremental amount. On the other hand, Stark knows that five mana spells, especially in multiples, are often too slow for this format and don't mesh well with extort.

Eventually Stark went with the Guardian of the Gateless, a card he said he'll likely be happy to have against some flavors of Boros. It made his main deck.

Interestingly enough, Stark diverges from many drafters by generally not liking Basilica Guards. It's another card he will often play (and, again, is in this draft), but its weakness against Simic and Dimir, where it does virtually no blocking, mean Stark prefers to leave it in the sideboard and bring it in against fast Boros and Gruul decks.

Now let's take a look at Stark's deck for this draft:

1 Way of the Thief

Note that Stark is jamming his curve as low as it can possibly go without resorting to something like Corpse Blockade. For example, he's playing Daring Skyjek, typically a Boros card, and says he's happy to do so.

"You play all the two drops you can get," he said. "Early, Skyjek trades with Boros early drops, and by turn five or six it can sometimes attack in the air. I'll always play that guy. I'll never really have it in my sideboard."

Another one of his two-drops heavily influenced how he built his deck, or, rather, a pair of two drops. His Vizkopa Guildmages have pretty strict color requirements, needing precisely BW to enter play on turn two. Since Stark wants to maximize the chances of that happening, that means he was unable to play the Firemane Avenger he snagged with an eye to possibly splashing.

"There are a lot of splashes in the format that aren't worth it, but Firemane Avenger is not one of them. The card is ridiculous. If I had picked up just one Boros Guildgate, I would have played it with two Mountains, but I didn't even see one in the third pack. So for this specific deck, since I need to cast Guildmage on turn two, it just wouldn't work. But for another configuration, I would absolutely play it," Stark said.

This configuration has worked so far. Stark rolled past Paul Renie and Eric Froehlich to move to 9-1. If the rest of the draft goes well, and there's no reason to think it won't, Orzhov could be the springboard to the Top 8 for Stark.