Hall of Famer Zvi Mowshowitz was only too happy to set aside his Day Two draft deck (something of a disaster) and fan out what he aptly called "The Nut Simic Deck" he had from Day One. I have to admit, it did look like something out of a fantasy, as it was a solid stretch of evolving creatured starting off with four Cloudfin Raptors, a pair of Stolen Idenities, and Ooze Flux as the cherry on top. I asked him for a crash course on how to go after this impossible dream.

"The first thing-" he stopped himself "Okay, the REAL first thing is don't fight. If you're shipping a blue-green card, you want to see that card table. " To hear Zvi tell it, the deck is a puzzle of necessary components, and if two players at the table battle for them, their decks will wind up as dysfunctional messes.

"Next up is curve. You want any number of Cloudfin Raptors. You want to start every game with one, and you're happy to go turn one Raptor, turn two Raptor, turn three evolve them both. Because of this you have to, and I mean you HAVE TO, have this." He gestured at his two drop slot, eight creatures deep. He's happy to have Disciple of the Old Ways and Greenside Watcher, anything to keep the count up 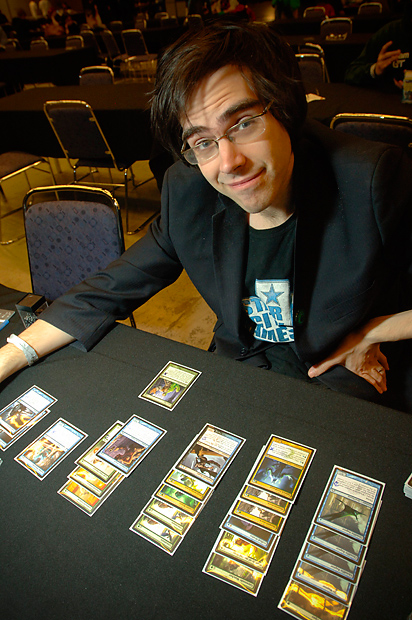 Hall of Famer Zvi Mowshowitz shows off the secret to a sweet Simic deck in Gatecrash Booster Draft.

"Now, you see this?" He gestured to the empty space where one would lay out the deck's spells. "You want this. Eighteen creatures is good. Twenty is better. I'd be happy playing twenty-four." The only spells you want, he says, are the ones that deal with the few cards you can't otherwise affect. He likes to have a Gridlock and a Hands of Binding. I asked him about the Deathcult Rogue and Keymaster Rogue in his deck, as they seemed at odds with the overall evolve theme. He said that they were only in because of his pair of Stolen Identities. The upside was too big to ignore. Otherwise, he would rarely play either.

Interestingly, as important as the early game is for Simic, there's a tension in deck construction, because you need your high-end creatures to keep the evolution rolling. Leyline Phantom, in particular, is essential for the deck. Zvi says that if you haven't got one by pack three, go out of your way to get one. Two would be ideal, but three is too many. The ability to evolve your squad every turn is just brutal."Bad Simic decks will have Adaptive Snapjaw here."

Lastly there is the mana. Because the deck is so demanding on both of its colors, Zvi likes to play a lot of Simic Guildgates. "Let's put it this way: how many opening hands with only one color of mana can you reasonably keep?"

I asked him about a few cards in particular. He called Frilled Oculus "Good, but not as good as he looks. He's just a 3/5 beater." Spell Rupture was "Fine, if you have to. Most turns you'd rather be playing out guys rather than holding up a counter."

For a second opinion on this diagnosis, I got a consult from Zvi's fellow Hall of Famer, "Doctor" Shuuhei Nakamura.

He echoed Zvi's thoughts on the importance of evolve creatures and curve. "Every game, you want to go 0/1 [Cloudfin Raptor] into 2/1 [Shambleshark] into 1/3 [Crocanura]." He went so far as to say that you really want every evolve creature you can get your hands on. Though he doesn't go quite so far as Zvi, saying that eighteen creatures is about right. "I don't think I'd want twenty." The bloodrush creatures muddle that math a little bit. Especially Scab-Clan Charger and Slaughterhorn, whose numbers are great for evolving your squad.

For Shuuhei, one of the most important things to remember is the speed of the deck. You want to be spending your turns building up a squad of giant monsters. Because of this, Shuuhei prefers the format's cheap spells. In particular, he cited Burst of Strength, and if you're lucky enough, Rapid Hybridization. You'll probably find yourself playing it on your own creatures as often as on your opponents' creatures. Another spell he likes a lot is Spell Rupture. "You must stop their bombs."

He also pointed out a couple of cards that are easy to overvalue: Zamek Guildmage and Fathom Mage, mostly because of the speed of the format. The abilities of the former are expensive to use well. "Fathom Mage... you play a 1/1 on turn four. You don't evolve your creatures. It's not good."

I asked him about how to know if you should switch into Simic after the first few picks, and he said that if it was pick four and he saw a Cloudfin Raptor or an Elusive Krasis, he would immediately switch into Simic. Those cards are so powerful and essential that to see them is a sign that Simic is wide open, and like Zvi said, when that's the case, you can wind up with a spectacular engine of destruction.