Did you decide to skip GP: Atlanta this year, convinced that you'd have to pay for a convention badge just to play in the tournament? If so, you're stuck at home and missing one of the biggest gaming conventions (and parties) of the year. 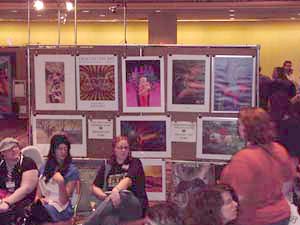 DragonCon is the second largest gaming convention in the country (with approximately 20,000 people in attendance), and is one of the ten largest conventions held in Atlanta each year. All of this cheerful mayhem is spread across the Hyatt Regency-Marriott Marquis-Peachtree Center complex, a multi-level conglomeration of hotels, charming stores, and sprawling rooms. The venue is so large that it's easy to get lost! However, it's all filled with zany people in exotic costumes, discussing the finer points of roleplaying and card games.

It's always easy to pick Magic players out of a crowd, but it's even easier here at DragonCon – they're the ones not wearing costumes! Pick a spot and wait, and you'll see Klingons, Stormtroopers, every possible character from the Matrix series, various medieval varlets and wenches, elves with pointy ears varying from undetectable to obviously artificial, women clad in fishnet tights and skimpy black leather, and body paint and makeup applied with expert attention to detail.

Just like Las Vegas and New Orleans, DragonCon never sleeps, and there are always too many things to do at once. You can stay up all night for film festivals and parties. You can get your cards signed by various artists, and browse for art at the Art Show. You can learn to play any game you want, from miniatures to wargames. You can listen to science fiction and fantasy authors discuss the finer points of their craft, and play trivia games for Star Wars and Lord of the Rings. You can meet Spike from "Buffy the Vampire Slayer" if you have the patience to wait through a long line, and you can stay and watch his band, Ghost in the Robot, play this Saturday evening. Or, you can stay where you are and watch for your favorite character to make an appearance. 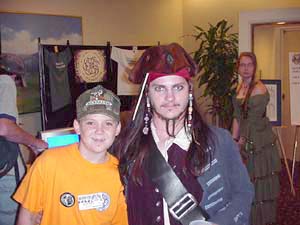 Captain Jack Sparrow is really Wade Finch, from Ft. Lauderdale, but don't mention that to his Legions of female fans. He spent all of Friday riding the escalators imperiously, surveying the vast atrium of the Marriott Marquis like it was his own personal pirate ship. 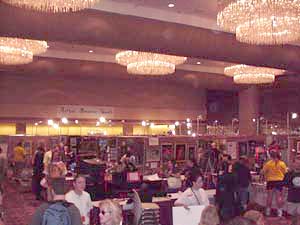 The Art Show and Bazaar is located on the lower level of the Marriott Marquis hotel, and features work by 216 different artists. Notable names at the show include Larry Elmore, Rowena, Jeff Easely, Edward Beard Jr., Janny Wurts, Laura Reynolds, Brom, Anthony Waters, and many more that most Magic players have never heard of. Artists are here creating art, too - an excellent artist by the name of Mark Jackson was putting finishing touches on a fantasy-themed piece at a table in the middle of the gallery. 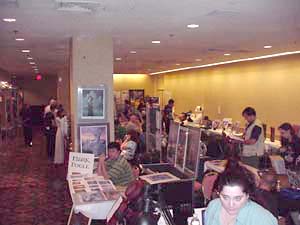 Does the name Mark Poole ring a bell? Many Magic players don't generally pay much attention to the art on their favorite cards, but chances are, you own cards that were illustrated by Mark Poole. Do you own a 6th Edition (and earlier) Birds of Paradise? Maybe a Balance or two? How about an Ancestral Recall, for those with deep pockets? Mark's been illustrating cards for Magic since the very beginning, and will have some new pieces in the upcoming Mirrodin set. He was parked at a booth in the Artist's Bazaar, an area on the side of the Art Show ballroom where many other artists were also peddling their wares. "I was trying to hide this year," he quipped as he signed a Library of Alexandria print. "But every time I start to whine, I just think that I could be cleaning chimneys or something else instead." 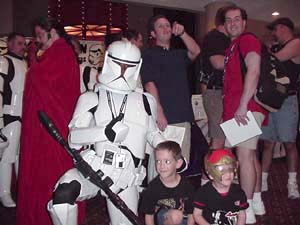 There aren't just fantasy-themed things to do and see at DragonCon – there's an enormous science fiction contingency here, too. In the lobby of the Marriott Marquis, an earnest Stormtrooper poses for a picture with a couple of young Star Wars fans. 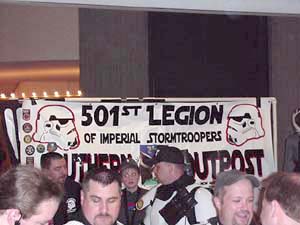 "Join the 501st Legion!" he implores the crowd. When quizzed, he gives more details. His name is John Rogers, and he hails from North Carolina. The 501st Legion, to which he belongs, is an organization devoted to helping out various charities. They boast 2,500 members in eight different countries. And, they've given $3 million to the Make-A-Wish foundation, and are now donating money to Toys for Tots. I had just one question for the 501st – where do you get a Stormtrooper costume? John tells me that they're mostly homemade, but that you can also buy them off of eBay. "LucasArts has been really cool about it," he comments. 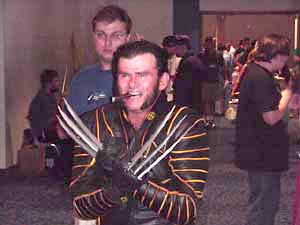 If you need comic books, DragonCon has you covered. You can even see the characters from some of your favorite ones! How about Wolverine? His real name isn't Logan, it's Bret Hill, and he lives in Tampa, Florida. His impressively detailed costume (complete with cigar) took him a month to construct. 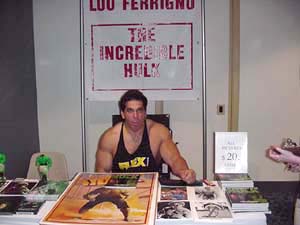 Or perhaps you prefer the Incredible Hulk? You can meet the star of the original Hulk TV series, Lou Ferrigno. Even though he's fifty-one years old, he still looks amazing. This picture doesn't accurately convey how huge this man is – he truly fits the role of the Incredible Hulk. 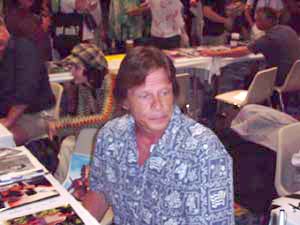 Speaking of film stars, Marc Singer is also in attendance. Some of our older readers may remember him from the popular 'V" series from the mid-1980's. He's been to five or six conventions already this year, signing pictures and smiling for the camera. He does panel discussions at these conventions, and was scheduled for a discussion later on Saturday. "I think my favorite thing about these conventions is meeting people. We make films in a can, and it's nice to take the lid off and meet people." 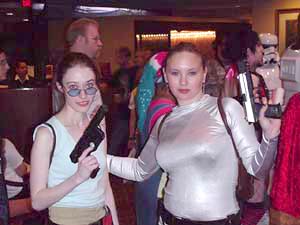 We also found a bevy of ladies dressed like everyone's favorite Tomb Raider. Left to right they are Rebecca Carefoot from Tennessee and Darr Halstead from Miami. Their Lara Croft costumes were amazingly authentic, right down to their large-caliber pistols. 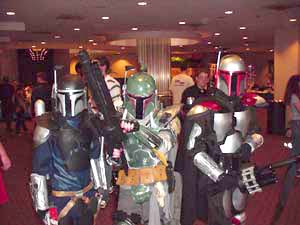 Or perhaps you'd like to join the Mandalorian army? One intrepid bounty hunter was carrying around a sign that said "Fett for California Governor." 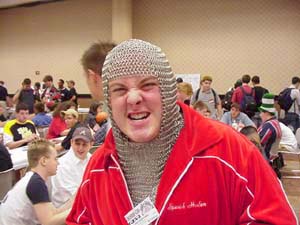 With so much to see and do at DragonCon, it's a shame that so many Magic players will just play in the Grand Prix. Put your cards down for a round and take a tour of the convention hall – you will be pleasantly surprised at the many, many things to see and do at DragonCon. And if you're stuck at home, make plans now to come to Atlanta next year. Take a page from Magic's legendary bad boy, PTR, and get into the DragonCon spirit!