Rise of the Eldrazi is a set like no other—not only is it wildly different in pacing from its much quicker sibling Zendikar, but the sheer variety of oddball cards, including Eldrazi Spawn token producers, a variety of ability-laden defenders, and even monstrous colorless Eldrazi and the tiny level-up heroes who face them. Such a new environment brings with it a host of new archetypes, and the professionals here at Pro Tour–San Juan are ready to wax philosophic about the best ways to dive in.

"Obviously White-Blue Levelers is sweet," said Luis Scott-Vargas, his ChannelFireball.com compatriot David Ochoa looking on and nodding. "None of the levelers should go later than like 4th or 5th pick." By now, however, most players are aware of the sheer power of level up and the explosiveness you can get with enchantments like Time of Heroes and enablers like Venerated Teacher. 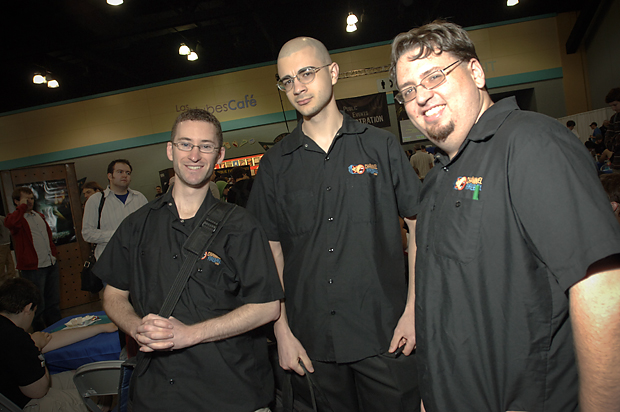 Scott-Vargas commented on a favorite of his, essentially mono-green with splashes for additional power. Ochoa pointed out Overgrown Battlement as an all-star in the deck, and Paulo Vitor Damo da Rosa joined the conversation to point out the versatility you get with a ramp spell core and whatever removal you can get your hands on.

Luis and David brought up the Black-Red Tokens archetype as well, where late picks like Bloodthrone Vampire and Lavafume Invoker can become very powerful at the head of an army of Eldrazi Spawn tokens. "Emrakul's Hatcher is very, very good," both agreed. They pointed out one of the great things about the black-red deck is you can start it with a solid removal core and then move into tokens later when you see the cards for it.

Paulo brought up a favorite of his: a "Grixis" blue-black-red archetype that values Mnemonic Wall quite highly. "If your first two picks are removal, then the Wall is definitely worth a third pick. It doesn't even really matter what your creatures are—a Halimar Wavewatch, a flyer, even a 2/3—if your removal is good and controlling enough."

Damo da Rosa and recent Hall of Fame inductee Frank Karsten agreed on a few component cards for other archetypes that you will sometimes see late. "Kiln Fiend and Aura Gnarlid," Karsten began, "... those cards are the kind of thing you can get 5th or 6th and they can be very powerful in the right deck. This format is about making a deck—it's about the synergy."

Paulo added Distortion Strike and Raid Bombardment to the list of late picks that a savvy drafter can take advantage of. The decks those cards support—Kiln Fiend / Valakut Fireboar / Surrakar Spellblade-type removal-heavy decks, and mass Spawn producer decks, respectively—can really benefit from getting the extremely late (10th or later) picks that supercharge their synergy.