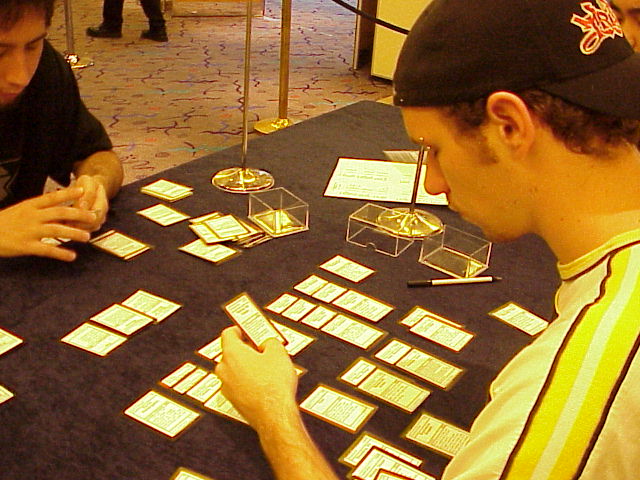 Being Ryan's first Invitational and everyone's first Duplicate Limited, the format had everyone excited and in a buzz. All the cards are printed proxies so it took more time than usual to get reacquainted with the cards. In addition cards have modified casting cost. Three of the cards Ryan noted were:

Beginning with arranging the cards into colors, Ryan sorted each color into two piles, one for useful cards, another for useless cards.

First noticing red for its obvious advantages of solid creatures and creature-kill, Ryan then proceeded to green for a mixed range of small to big creatures, followed by black for creature removal while discarding white and blue.

Among these three colors, Ryan then arranged the cards by casting cost, with 3 casting cost being the most predominant. This latter changed to 2 casting cost, balancing a more efficient mana curve.

Ryan commented, through deck-building: " It's hard to sort where everything is! How do you sort through this?" Another observation was the unusually high cost, creature killing cards, among then: Dark Banishing, costing 3 BB. Reflecting upon the format Ryan said: " I just can't stand not having real cards."

Resulting from the hour-long duplicate deck building was a red/green/black. Black being the main color, followed by red and green.