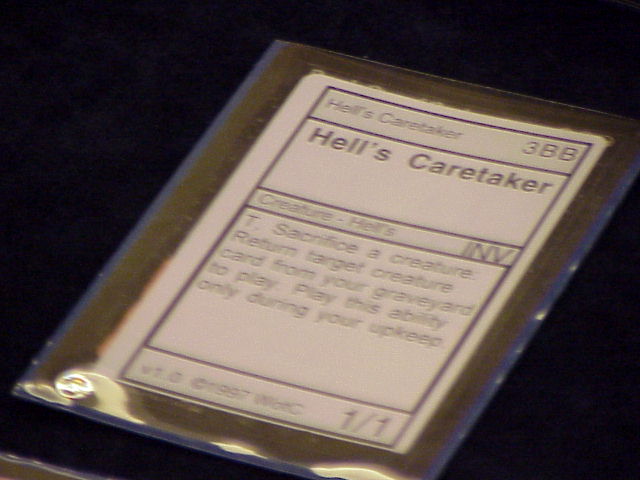 They didn't know what they were in for. Each year, Mark Rosewater puts together a Duplicate Limited card pool that tries to challenge and entertain the players. He always works in a bunch of goofy combos, some of which are good, and many of which aren't. In Rio, all the cards were good. In Hong Kong, all the cards were terrible. In Barcelona, the cards were all middle-of-the-pack cards but there was a new twist that has become the hallmark of this traditional Invitational format: brand new cards. Rosewater created some new cards like "Speedy Zombie" that players had to evaluate on the spot. Last year in Kuala Lumpur the cards were once again horrible, but once again there were new cards like "Too ... Many ... Words" and "Aether Fart."

That brings us to Sydney where every card is new and no cards are new. Rosewater took 90 cards from previous Magic sets and did nothing except change their mana cost. Of course, he also chose cards so there would be approximately 8 billion goofy combos. Hell's Caretaker/Rukh Egg anyone? How about Thran Forge/Scarwood Bandits? And do you play Nevinyrral's Disk at 8 mana? How about The Abyss at 1BB?

Before the players were handed their cards, I talked to several of them to see what they thought of their chances. Darwin Kastle commented "I love Duplicate Limited, but I haven't done as well since Mark started making up new cards. But I do now have the advantage that I've done this before at those other Invitationals. I especially liked the crazy card pool from Rio." Chris Pikula, on the other hand, says "I have the advantage that I think I understand how Mark Rosewater thinks." Gary Wise took a completely different approach. After finishing last in Kuala Lumpur last season and doing no preparation for this year's event, he's just here to have fun and try to help promote the game. "I think I'm going to allow take backs. In fact, if it's obvious, I might even offer them." 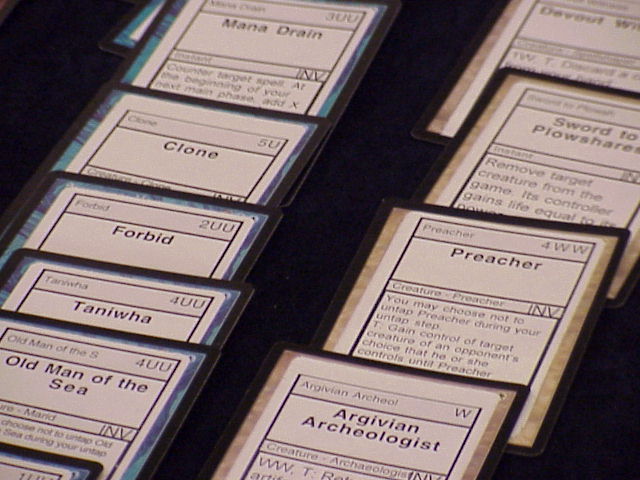 Rosewater changed the format slightly before handing out the cards. Many players complained about the restriction to zero land in their sideboards so Rosewater changed it to two basic lands in their sideboard, but those lands had to come from colors where they already had at least 6 lands of that type in their main deck. This new rule will prevent players from sideboarding into their opponent's deck or whatever deck everyone figures out is probably best. This year, the pressure is on to figure the format out yourself!

Once the cards were handed out, the real fun started. Dave Price smiled when he saw a stack of 90 stickered cards, saying "they're all R&D cards." After a few seconds of puzzled analysis he asked allowed "they're all real cards? Oh hell!" There was a lot of smiling and laughing as everyone figured out what was up. Budde proclaimed 'Mana Drain!" and Long complained "You made me worse?" referring to the 1UU cost on Rootwater Thief. Finkel didn't recognize Winnow and someone had to tell him that it was in Invasion. With five minutes left in deckbuilding, only Dave Price had turned his decklist in.

This is probably the most balanced and interesting Duplicate Limited environment in Invitational history. Every color was played by at least 4 people and 74 of the 80 cards are in someone's deck. As I walked around I saw lots of cards in one person's trash pile and another person's main deck.

When I helped playtest this format, I played a black/blue/white deck with The Abyss, permission, removal, and all the 8-casting cost artifacts. I played 19 land plus the Lotus and felt I wanted more mana. However, the beatdown creatures were pretty weak at the time and the format has been tuned since then. Green in particular was made better by the addition of Deepwood Tantiv and Wild Mammoth, plus the reduction of the cost of both Tracker and Maro.

The grand tradition of overtuning because of playtest data continued as the Duplicate Limited card set that Rosewater brought to the Invitational probably had green a little bit too good. Fourteen people chose to play green and all of them played with both Tracker and Hunting Moa - making those the most played cards in the format. 13 people played Maro and 12 played Mishra's War Machine and Artic Wolves, rounding out the top 5. Interestingly, though, only 2 other cards were played by as many as 10 players - Bone Shredder and Rukh Egg. So while green/red/black was the most popular strategy, there was an awful lot of disagreement about which cards and combos to play. 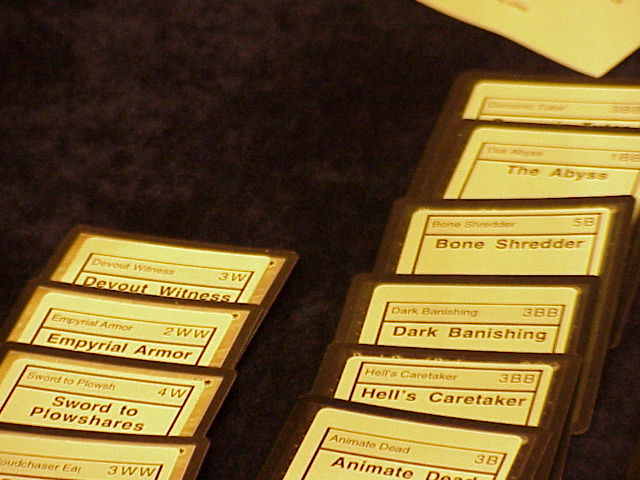 Other interesting facts about who played what: Everyone who played white played Devout Witness - it's really useful at busting up the combos that are floating around. Thran Forge/Aladdin is in a number of decks. (Aladdin only checks when it steals an artifact and you get to keep it even if it's not an artifact next turn.) Pikula is hoping to pull off Living Plane/Goblin Bombardment at some point, but he'll settle for Living Plane/Subterranean Spirit (especially if he has Spidersilk Armor in play keeping all his own lands alive). Jon Finkel is the only person playing Illicit Auction, but he seems very happy with it, describing it as "a tight little package." Only four people have Thran Forge in their main deck, but a lot of people started to realize its power (it beats Abyss, it beats Bone Shredder, which is even more important with Hell's Caretaker floating around, and it combos with your own Aladdin or Scarwood Bandits) when they compared decks and I think a number will be sideboarding it in. Poor Crown of the Ages didn't get played by anyone even at 0 mana.

It'll be really interesting to see who was right and who was wrong as they play out the next three rounds.